You know, besides everything else!

As we move into week three of our running theme of compact-type/take along toys, we move away from tiny girls with awesome playsets, designed after a makeup compact, to a tiny boy and his horror-themed adventures (both inspired by a similar – and pretty – toy you can put in your pocket that I looked at on Flashback Friday earlier this summer).  This is a toy I can claim to have owned (more on that later), and was actually alot of fun, despite its simplicity.

And the parts themselves weren’t tiny like Polly Pocket and Mighty Max, so the worry of losing the toys was probably much lower!

I’ve Got A (Sweet) Secret

Sweet Secrets were introduced by Galoob in 1984, and were little plastic lockets of varying shapes and colors, with a jewel on them (also of varying colors and shapes).  When one opened the locket, a doll head, arms, and feet popped out.  Girls, boys, animals, and babies were all concealed inside these lockets.  Some lockets were wearable as bracelets and necklaces, but others were attached to combs and brushes, as well as playsets. The playsets themselves looked like inconspicuous little sets (including a play phone, boombox, a clock, and a jewelry box), but the contents within were a treasure trove of little girl fun.

Who didn’t love jewelry they could also play with?

But Sweet Secrets were more than just transformable lockets of pastel and plastic sparkly-jeweled fun!

The World of Sweet Secrets

The little plastic locket-type toys were charms, and they came as both standalone toys, as well as part of all playsets.  These little wearables were cute and fun to take along, the perfect toy/piece of jewelry for the very fashion-conscious 1980s girl!

There were four series of Charms, with the first having three dolls.  As this series grew, the each doll would have three color variants.

Images: Ghost of the Doll

These cuties are the animal version of the original charms, also released in several series.  I believe I had the dog (Pretty Puppy), but if I didn’t, he looks familiar.

That horse though…in my My Little Pony-loving world, how did I not know Star Jumper (and Starburst) existed?!

The baby sets were always adorable.  Like the animals and charms, the babies had several series of their own, with adorable little sets that were incorporated into their jewelry.  I did have two babies, but they were part of a playset that I had.  And trust me, you’ll want to see that playset!

Inside these cute little charms came blush, cologne, lip gloss, lip stick, and nail polish.  This picture is a vanity set from the second series, and came with the mirror, comb, and brush toys from the playsets, but with different charms than those pictured.

The adorable dangles were part of a jewelry line that included hair bows, watches, and bracelets.  We already knew we could wear our charms around our necks, but the dangles had clips that could put strewn together on a necklace, or to form a plastic charm bracelet.

Originally, the dangles were sold separately, but were later included with dolls or animal charm blister packs.

And as for those bows…

Eat your heart out, JoJo Siwa!  These were our bows!

I remember these little stationary sets well, though I don’t think I had them.  When closed, these little sets had paper to write on, but inside, your Sweet Secrets animal had stamps or a pen, as well as a whole little room playset that was just for them!

File this one under “didn’t have it, and I don’t remember it.”

Seriously, I never knew there were plush Sweet Secrets toys!

These fun purses transformed into a doll, a bear, or a dog.  They didn’t come with a charm, but they definitely had the exact look of the plastic Sweet Secrets toys.

This aspect of the toyline also had cute coin purses that turned into Sweet Secrets that clearly resembled Fisher-Price’s Smooshies (another toyline from around the same time that I had plenty of!), but folded into their little purse.

And, last but certainly not (by a long shot!) least, the thing I remember best about Sweet Secrets…the playsets! 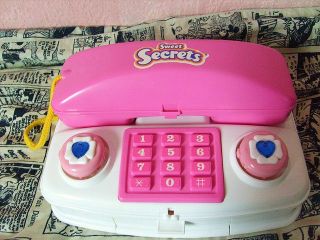 I loved my Sweet Secrets phone!  An unsuspecting hot pink play phone, with buttons that did not press, becomes…

I LOVED this little set, which was not so little for my five-year-old hands.  A bath tub, changing table, plates and bottles, and two cribs made this little set adorable.  There were two versions of this, and I had this exact one.  At one point a few years ago, I had been trying to find the name of the play phone I owned as a little kid, and because I had completely forgotten about Sweet Secrets (or at least, the name, I never forgot the dolls themselves).

And this was not the only fun playset!  The larger ones included a working boombox, a dollhouse, and the play phone, while the smaller sets had a comb that transformed into a bed, a brush that transformed into a car (I believe I had the comb and brush, or at the very least, the comb), the vanity mentioned earlier, a hairdryer/patio, and a picture frame/swimming pool.

Ghost of the Doll, which is an amazingly comprehensive website for anything girlie and doll-like, has an amazing section on Sweet Secrets, complete with awesome photos from the Galoob catalog.  I highly recommend checking out their site, its where I got 99% of my Sweet Secrets information.

The Power of Transforming Plastic is Pretty Big, Apparently…

Now, I knew the whole Sweet Secrets world was big, but I had no idea (or in the very least, forgot) how big the world was.  I remember the commercials, of overly excited girls keeping their little plastic lockets and accessories a secret.  A sweet secret.

And of course, I remember my play phone/nursery and charms.  I never wore them as jewelry, but I loved unfolding the dolls and playing with them.  Even the ones that didn’t go with the play phone still had a part in taking care of the two baby charms.

They needed babysitters, after all!

Sweet Secretes was manufactured by Galoob from 1984 until the mid 1990s, with later sets being released in distinctive blue boxes.  Galoob closed its doors in 1998, selling off its properties and brand.  I actually had no clue that Sweet Secrets lasted until the mid-1990s, but considering that I was too old for these awesome little toys by that point – mid-1990s would have put me at 12-13 years old.  As I’m well aware, playing with my plastic charm dolls and play phone would not have put me ahead of the cool group.

In 2007, Play-Along Toys re-released the Sweet Secrets toys, but as tiny dolls that fit into lipstick tubes and change purses, rather than cute plastic charms. Pink, sparkles, pink sparkles, gems, plastic charm glory, and overly excited girls with all of these wonderfully amazing, 1980s girlie explosion-worthy items were the subject of television commercials during their existence.

And a commercial for the newer, less exciting (at least, to me) toyline.

Do you remember Sweet Secrets, whether you had the toys or watched the commercials?  Did you pretend to call someone on the play phone, or jam out to the boom box?  Did you comb your hair with the comb, and get compliments from your brother on how great you looked?  Sound off in the comments below!

Next week, we wrap up compact-type/take along toy month with a toy that sorta fits into the theme, but has a huge nostalgic impact on me.

Man did I love these!