Right here, of course!  And Flashback Friday is standing in line right behind Thursday!

Technology circa the early 2000s was evolving, but was nowhere near the standards – or rather, norms – of today’s technology.  In 2019, kids would scoff at the “luxuries” we had in regards to our circa 2000 technology – 56K dialup modems (complete with a man running to be with his friends on the dialup screen), disposable cameras (my best friend’s late brother, who lived with Autism, took “disposable camera” literally when he went on vacation – true story), analog television, no streaming video services, Netflix, or YouTube, and…cell phones that really only made phone calls.

Broadband internet was in its earliest stage, but 56K was the standard, and that was what we had in our homes.  And in regard to cell phones only making phone calls, they were just beginning to do something else in 2000.  That’s where today’s commercial comes in! 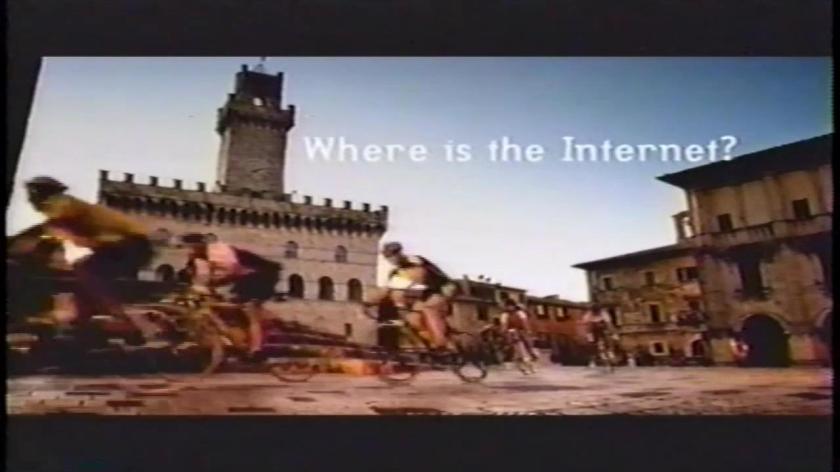 (Also known as the high-tech version of “the beef” Clara Peller was looking for so many years earlier.)

Anyway, the internet is anywhere you want it to be!

You laugh, but this was big time technology in 2000!

Find out who is bringing you the internet anywhere you want it to be, and what it is being used for (in the case of this internet user), when you click play!

The internet, on your phone, to buy a fancy Italian sportscar no matter where you are…

…no matter what you’re doing?

One company was making this possible in the earliest days of cell phone popularity!

Lucent Technologies implored us to expect great things in the early 2000s, and with the advent of mobile internet in a world that still primarily used analog cell phones and dialup modems tethered to a computer in a stationary setting, this innovation seemed truly earth shattering!

Founded in September 1996, Lucent was a divestiture of the former AT&T Technologies business unit of the AT&T Corporation.  This included Bell Labs and Western Electric.  Lucent is Latin for “they shine,” and its logo, “The Innovation Ring,” was designed by San Francisco-based branding consultancy Landor Associates.  Almost six months before this commercial aired, Lucent had sold off its consumer products, as well spun off its business systems arm, and eventually its microelectronics division.

Talks of merging with Alcatel began as early as 2001 for the struggling Lucent, but it wasn’t until 2006 that this actually happened.

My parents actually still have my old landline phone from when I was in high school, a white corded AT&T phone with the Lucent logo on it.  It was purchased in 1997 as a birthday present, and it still works.  I even got a – wait for it! – answering machine with a cassette tape that Christmas!

And yes, in case you’re wondering, my parents do have a cordless phone in their house – two of them, actually.  They’re connected to the same phone line, I have the same ones in my house.  And no, they don’t have a 56K modem.

So, I mentioned that in the spring of 2000, Lucent spun off its business systems arm into another company.  As I came to find out, the commercial I chose for Flashback Friday had more than just a common thread in being about internet connectivity and information technology.  Turns out it is the spun off company!  So that’s what we are looking at tomorrow!