Because these really are a Throwback, and the only thing you really can do with them, is, well, what the name suggests…SMOOSH!

I’ll be honest, this week’s theme isn’t much of a theme, I just picked two random commercials from my collection because the music is catchy.  The commonalities are that both toys were from Fisher Price, they’re from around the same time, they have catchy jingles, and they’re for girls.  Oh, and I had one of them, and different version of the other. 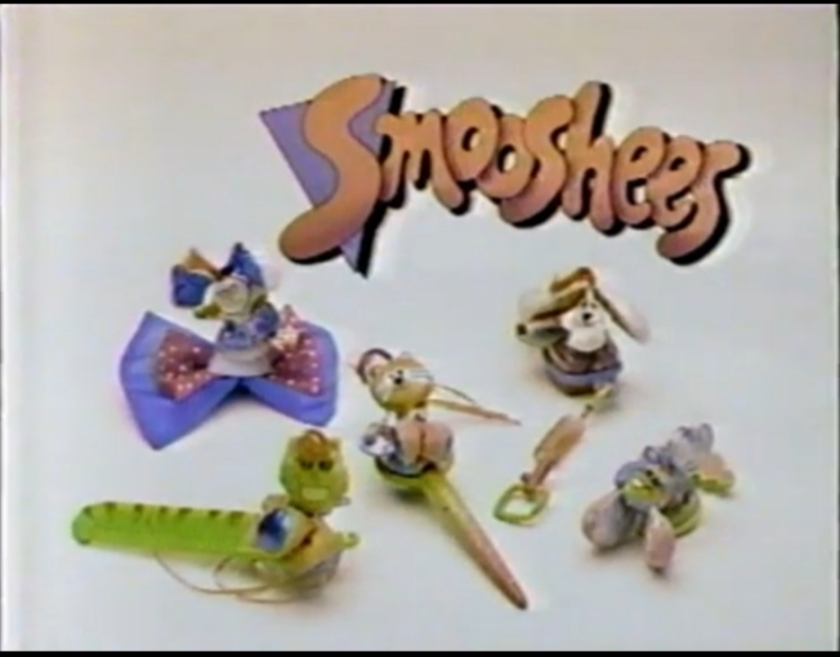 When I was six years old, I received several toys called Smooshee, a small plushie with a plastic playset that I could stuff the included doll into.

I had a boy with a sweatshirt and a skateboard…

…A dog with a doghouse…

…A baby with a stroller…

…And a dollhouse with its own dolls and accessories that I could also smoosh my other Smooshees into.

I LOVED that dollhouse!  I remember putting the baby in the swing, and using that dollhouse for other small dolls I had, in addition to stuffing all of my Smooshees in the chimney.

I had some pretty cool toys around this time (including the Sweet Secrets phone/nursery), and Smooshees definitely fit into that category nicely.

Because these toys weren’t around long, I had forgotten about them (it’s been thirty years since Fisher Price stopped making them).  But, as I already know about myself, nothing nostalgic ever stays forgotten in my head (which is not always a bad thing).  These adorable, cuddly toys came back to me when I found a compilation of 1980s child-friendly commercials on Amazon last year, I re-discovered these long-lost toys of my childhood, sandwiched nicely in between all the other memories of a very 1980s childhood, both remembered and forgotten. 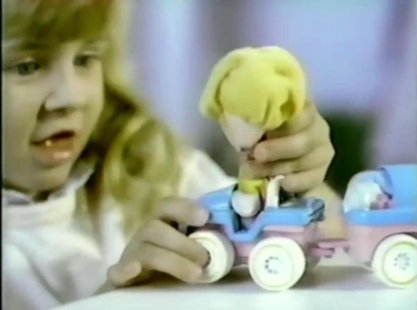 It’s got a catchy 1950s “At the Hop”-style jingle, little girls loving the heck out of their Smooshees (some more than others), and 52-card pickup, Smooshees style.

Oh, and Beverley Mitchell from 7th Heaven is in the commercial

Did anyone else notice crazy girl and her huge grin?

That’s less “enthusiasm over playing with Smooshees,” and more “Wild Sadistic Smooshing Smooshees” written all over her face.

I’m wondering how much the toys sold themselves, because if I were a parent and saw this commercial, it wouldn’t influence me in the least to buy Smooshees for my kid.

I’m wondering if these were bought for me based on the commercials, or if whoever bought them through they were cute.  Because after seeing this girl playing with them…quite frankly it isn’t the most appealing way to advertise your toy.

Fisher Price manufactured Smooshees from 1988 until 1989, which is very short-lived (by contrast, the Yum Yums had a longer life), but in that time, Smooshees invaded writing utensils, toys, hair accessories, keychains, Christmas ornaments, Easter decorations, and even children’s meal Halloween-themed giveaways from Hardee’s in 1989.  There were also books (both the story and coloring varieties), a Halloween costume, and yes, a lunchbox/thermos set that lacked a Smooshee.

The house itself was so cool, I absolutely loved playing with it, and as I said, putting other small dolls lacking their own dwelling in it.  It even had its own commercial, sans sadistic girl.

Upload via RetroTy: The Pulse of Nostalgia

I’m not sure why these were discontinued, but I’m wondering if playability was diminished over time, or Fisher Price had something newer and exciting when compared to dolls you can stuff in plastic.

Whatever the reason, Smooshees can run in upwards of $10 on the low end, to over $50 for mint in box sets on eBay.  They’re super cute, but in hindsight, the novelty probably wore off quickly.  These days, I would probably be more apt to display them on my desk at home…with the occasional stuffing and un-stuffing.

This wouldn’t happen though.

Tomorrow on Flashback Friday, we’ll visit another equally short-lived Fisher Price toy, whose playability is probably even more limited than today’s toys, but cute and memorable once you, you know, remember them.