We’re wrapping up compact-concept/take along toy month with a toy that while similar in nature, is actually something different, mostly because it is not only portable, but you can also store other things inside of it.

Over the course of this month, Polly Pocket and Mighty Max had adventures contained in a compact, and Sweet Secrets were hidden within lockets and ordinary-looking playsets (including the play phone!).  Today, we’re meeting the Keypers!

Keypers were animal-like toys with an opening compartment that unlocked with a key, and opened with the purpose of storing small toys and objects within it.  Initially, there were three Keypers – Fancy (snail), Tango (ladybug), and Shelldon (turtle).  Each one came with a key, a storybook…and a (color-matched) Finder!

Fancy had Footloose, Tango had Twist, and Shelldon had Nightlite.

In addition to the large “Adult” Keypers, there were also “Baby” Keypers, with a slit on its back.  These Keypers were to be squeezed to open, with space inside to hide treasures. 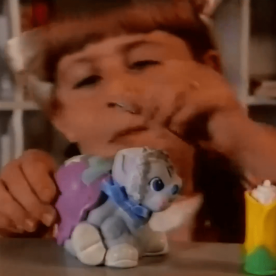 Pearl the Snaill, Poke the Turtle, and Belle the Swan were the original Baby Keypers.

No new Keypers were introduced until a third series in 1990.  This series had adult Keypers only, and included Music and Jewelry Keepers.

…and they are so cute!

These Keypers had a slit on its back (like a pocket) to stow away treasures.

In addition to the Keypers, Baby Keypers, Plush Keypers, and Finders, there were playsets for the Baby Keypers, each with their own key and secret way to play!

The world of the Keypers closed up its secret compartment in the 1992, and can be found on eBay (as of this writing) averaging between $9 and $35 for the Adult and Baby Keypers, as well as Finders, Keys (perhaps you got a Keyper without a key?), and Accessories.  Unfortunately, there were no listings for the playsets at this time.

So, after all of this, and the revelation that I owned a sizable collection of last week’s toy…I ask the important question!

Did Allison Have Keypers?

I had two Keypers, actually!

I distinctly remember having Fancy…

I can never forget that pink shell!

As for the other Keyper I had, I think it may have been Tango, but I’m not 100% sure.  She certainly looks familiar to me beyond the commercials, but I definitely had Fancy! I don’t really remember what I kept in my Keypers, since I was about 4-5 years old and couldn’t possibly have had anything tiny and valuable to hide.  These were super cute, and I think I was more fascinated with turning the key and opening the compartment than I would have been with storing tiny things other than the Finders that came with my Keypers.

This was one of those toys (like Sweet Secrets) that eluded me for many years in my earliest nostalgia searches, but like alot of things that collect in my subconscious, this one managed to put its way back through. I’m pretty sure I even spelled it wrong when searching!

Aiding me on my journey…probably these commercials!

You seriously thought you were going to get away without them?

I particularly love this Australian commercial for the Baby Keypers (literally the American equivalent word for word, and these kids are so cute!). 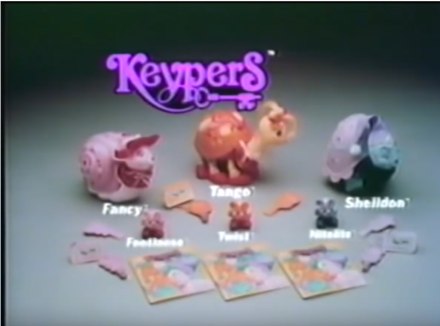 Do you remember Keypers, and the secrets you hid within your Keyper’s container?  Sound off in the comments, or be social on social media about this topic!

And that about wraps up (or locks away) this theme in its hidden compartment, or compact!

And with September coming up, a new theme is on its way!