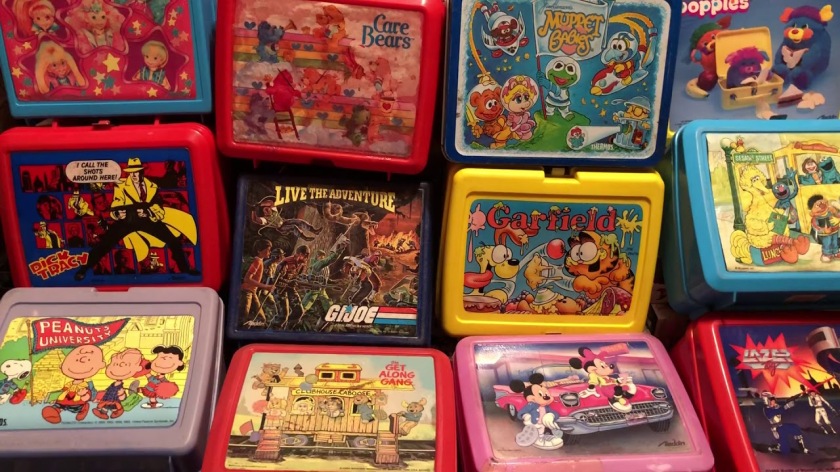 “Too Cool for School” Month wraps up with the inclusion of the last major staple of our very nostalgic school life!

We stocked up on the most important school supplies to prepare for our very nostalgic school life – a Trapper Keeper to store our school and homework in (bonus points if it was from the “designer series”), stocked up on Lisa Frank pens, pencils, stickers, erasers, and jewelry (gotta have it!), and we probably even picked up a locker answering machine or pocket folders with jeans-clad posteriors on them (or perhaps something else from the Class Act school supply line?).  We’re missing one all-important supply: something to store our much needed fuel to keep us going during our very nostalgic school life!

Enter the ultimate container, where what is on it is just as important as what is in it!

“What Character Do You Have?”

The idea of a character-adorned lunchbox is not a new or novel concept, invented with the time I was growing up, and it certainly didn’t get ushered in with the current generation (though they’d probably like to believe they “invented” it!).  In fact, it came in to the classroom on our parents’ generation.

The first licensed character lunchboxes, a common thing in today’s school supply aisle, was first ushered in during the early 1950s.  A strategic move by Aladdin Industries, who had been making the standard lunch container since 1908, was to put Hopalong Cassidy on a lunchbox, increasing sales of lunchboxes from 50,000 units…to 600,000 units.

Well, Aladdin knew what they were doing, striking a chord with consumerism that apparently really liked licensed characters.  During much of the next 30 years, Aladdin continued to dominate, and well, the lunchbox went from being what kids carried their lunch in, to being “what character do you have?”.

I should note though, it was only after American Thermos introduced full-lithography on all sides of their lunchbox, did Aladdin change their tune.

Adding On a Thermos, And The Change from Metal to Plastic

Aladdin’s acquisition of the Stanley Bottle operation cemented their company’s position in the food and beverage container in a big way, and it only increased from there.  Not only did we get a cool new lunchbox, but a MATCHING THERMOS!!!!!

What wasn’t to love?

The introduction of Superman, Mickey Mouse, and The Jetsons on future lunchboxes after the initial introduction of Hopalong Cassidy only kept the line endearing to image-conscious kids who needed a lunchbox for days school didn’t have lunch they wanted.  Saturday morning cartoons didn’t just have toys, books, bedroom sets, clothing, school supplies, and backpacks, they also had their faces printed on lunchboxes.

By the 1980s, metal lunchboxes turned to molded plastic, which were cheaper to manufacture.  My first lunchbox (for preschool in the mid-1980s) was metal, but the first one I carried to elementary school in 1989 was plastic, as would my second lunchbox (More on those beauties later).  I heard a story some years ago that the metal lunchboxes were banned, and I just assumed this was never true.  I mean, why would metal lunchboxes be banned in school?

It actually is true.  The state of Florida banned metal lunchboxes in 1972, amid “dangerous weapon” concerns.  While other states followed, the molded plastic design was actually cheaper to manufacture, which lead to the ultimate discontinuation of the metal lunchbox by 1985.

What was the last metal lunchbox,you ask?

Yes, they were banned by some schools as weapons, but in reality, it was the lower cost of molded plastic that ended the metal lunchbox’s reign at lunchtime.

From Plastic, To Insulated, To One Company’s Discontinuation of Lunchboxes

By the mid-late 1980s, plastic lunchbox/thermos kits dominated the lunchrooms once populated by metal lunchboxes.  Nothing changed about them, aside from the plastic lunchboxes only having the sticker of your licensed character adorning the front of the box.  The rest was just brightly colored plastic.  But you didn’t care about that minor detail, as long as it had the character you liked!

By 1998, Aladdin discontinued making the lunchbox altogether, but Thermos, Aladdin’s direct competitor in the “what character do you have?” game kept right on going, converting the cool images on those plastic lunchboxes to their insulated bags.  Thermos still makes them to this day, but for the nostalgic set, these do nothing for us.  For the kids some of us buy them for, perhaps, but not for us.

Although if you handed me an Avengers lunchbox tomorrow, insulated or otherwise, I’d run off happily with it.

So, as I said earlier, I did own several lunchboxes in my very nostalgic childhood.  My first one was a metal lunchbox/Thermos combination, featuring The Muppet Babies.

My brother and I both had this.  The Thermos was super cute, featuring my favorite Muppet, Kermit.  I have had a particular affinity for Kermit since my mom bought a Christmas stocking holder when I was about a year old. It’s not like I knew who Kermit was or anything (or maybe my one-year-old brain connected it with Sesame Street, I have no idea), but I liked it and kept a death grip on it.  My mom said I liked it so much, I took it with us when we went out to dinner.

I’m assuming that lunchbox was bought for pre-school use, but after that, it became the holder of Crayola crayons (and a big red Crayola sharpener) for quite a few years.  I have no clue what happened to the thermos, but the lunchbox stuck around for a while.  I spotted it in a thrift store in Ocean City, NJ in the summer of 2002, along with the thermos.  No, it wasn’t mine, I’m pretty sure that lunchbox found a trashcan in the early 1990s.  I was tempted to buy it back then, but decided against it. Even now, I don’t really know what purpose it would serve, and lord knows I wouldn’t want to use a thirty-something-year old thermos that wasn’t originally mine!

The idea of that just…yeah.  Ew.

By the time I was in first grade (we had half-day Kindergarten in my school, so I don’t recall needing a lunchbox), the need for a lunchbox was upon us, so we (naturally), went right for the licensed characters.  It’s like I’ve seen in several lunchbox-related articles, they were like concert t-shirts for teenagers.  This was 1989, and as licensed character stuff went from Care Bears, Strawberry Shortcake, and Rainbow Brite, to whatever was big among girls in the late 1980s.  Of the popular characters to choose from of that time, I chose something rather timeless, brought up to a 1980s vibe.

I LOVED this lunchbox, especially that Thermos.  Apparently there were several different version of the Mickey and Minnie lunchbox that year, but this all-glammed-up version was the one I took to first grade in 1989.

And I had this. 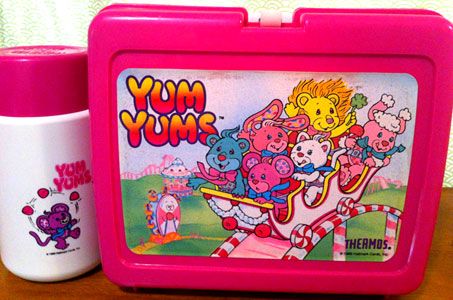 So it has been explained (through research) that the Yum Yums were Hallmark’s version of the Care Bears crossed with Fisher Price’s The Wild Puffalumps, several years after both franchises had quieted down (the former) and faded away (the latter).  The toys smelled like candy, and these colorful characters had their own one-off special from Hanna-Barbera, The Day Things Went Sour.

I guess I saw it, and liked the characters…or was it because this lunchbox was neon pink and pretty?  Either way, there was only one other kid with a Yum Yums lunchbox in second grade, and we weren’t in the same class.  I’m pretty sure this was a over and done with long before I was over and done with that lunchbox at the end of the school year.  I do love that thermos, it is super cute!

I don’t recall having any other Yum Yum toys.  Nosey Bears, yes, but not Yum Yums.

If I had known this would be the swan song of carrying a plastic character lunchbox to school, I would have chosen more wisely.  I mean, this one was cute, but there had to be something else I was interested in, right?

It probably wasn’t socially acceptable to take a lunchbox to school with a boy-type licensed character on it.  That’s pretty much what I liked at that time, my brother’s cartoons.

When third grade rolled around the following year, I went to the Intermediate School, which meant big kids…and a big kid lunchbox to go with it.  I remember a new insulated lunch bag that didn’t come with a Thermos, but my mom did use something new in the bag…an ice pack!  By that point, character lunchboxes kinda fell by the wayside, and the big kids carried insulated bags.  It was a nice time, while it lasted.

The History of the Lunch Box: Smithsonian Magazine has an awesome article from 2012 all about the history of the lunchbox, from its beginnings as kids fashioning their own from cookie or tobacco containers (they wanted to be like their working daddies) all the way to our very nostalgic school life, and beyond!  It’s a great read!

Quality Logo Products: A detailed timeline of the lunchbox, from introduction to the ban on metal boxes, to Thermos introducing the soft-sided lunchbox.

CBS Sunday Morning correspondent Nancy Giles visits the Lunchbox Museum in Columbus, GA, where 1000 lunchboxes are preserved for the sake of our very nostalgic school life!  (From 2017) 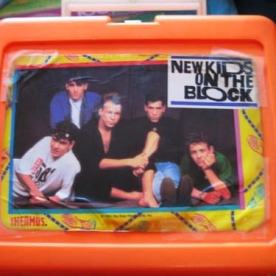 Did you have a Thermos or Aladdin character lunchbox as a kid?  What one(s) did you carry to school?  Sound off in the comments below, or be social on social media.  As always, I’d love to hear from you!

“Too Cool for School” month is coming to a close, as the school year rolls on.  Usually by October, we were settled into a routine, the new-ness of a new school year wearing off.  Which means we can settle into a new theme for October!

Oh, and on Wednesday…a rare Wednesday post!  What could it be?

(Well, I know already because I finished and scheduled it, but you won’t know until then!)

Such suspense, it must be killing you!