Some say it’s mystic, others say it’s a fad.

I got this great story from Matt, a frequent visitor to the site and friend of the Twitter-verse, in response to last week’s fad dance history of “Macarena”:

A friend of mine worked at Kmart when this song was at it’s peak and Kmart decided to get in on the action. Periodically during the day they would play the song and all employees were required to stop what they were doing and do the dance while the music played. Apparently it didn’t have the intended consequence, as it just annoyed the customers, who had to wait while the cashiers finished dancing. There’s security camera footage of my friend, standing on the service desk, doing that stupid dance in front of customers.

Oooh corporate story mixed with a this month’s topic.  Now this is why I write about these things…crossover appeal!  Rest assured that if I was a customer witnessing this, I would have been dancing along!

(Oh, and Matt is going to attempt to get the video from his dancing friend, so if that happens…future updates!)

Again, thank you Matt for your response!

Ah, the organized dance as the staple of weddings and parties.  My wedding guests couldn’t believe they were doing “The Chicken Dance” (that’s the lyrics, they knew full well what they got themselves into), but we also threw in a few other novelty-type dances worthy of our dance energy.

Yes, we did the Cha-Cha Slide, but we also went back more than a few years in time for another one, a “fad” that has managed to have the staying power to crush 99% of all fads.

In 2016, I was helping a co-worker compile dance music beginning with different letters each week for our agency’s Sunday respite program, and we had gotten to “E.”  Naturally, I had to throw in “Electric Slide,” which I figured some of our adult-aged participants might know the steps to.

That of course, inspired me to write a Retroist article about it, after seeing there was an actual music video, chock full of organized choreography…as well as what I refer to as “The Electric Slide After Dark.”

It’s quite interesting, if only for the clothes and the breakdancing portion of the video!

The actual song is “Electric Boogie,” while the dance itself is “Electric Slide,” and it has a history that goes back before the early 1990s. 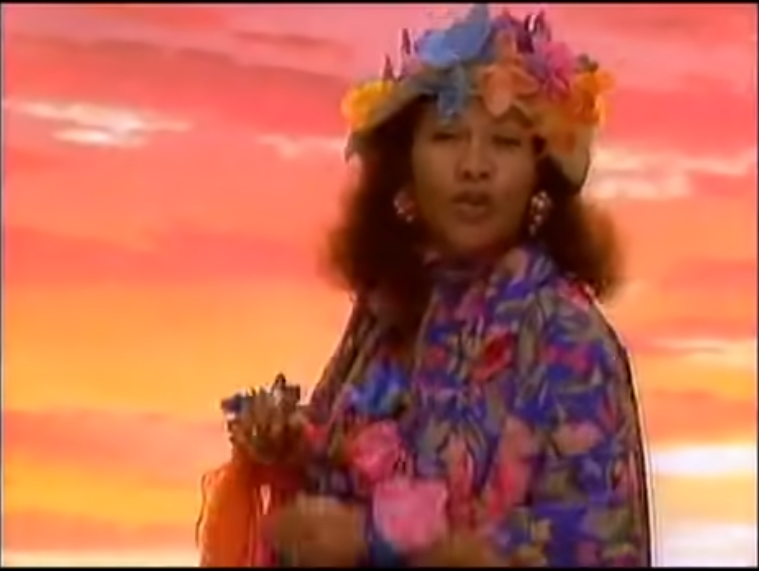 Griffiths had a whole other career pre-“Electric Boogie,” associated with Byron Lee and the Dragonaires, Bob Marley, and Bunny Wailer.  Wailer recorded the original version of “Electric Boogie,” but it was Griffith’s version that became a minor hit in 1983.  But, not content to leave well enough alone, a remixed version of Griffiths’ treatment was released in 1989, and well, that’s when it really took off.

The remixed version reached #51 on the Billboard Hot 100 in 1990, and we’ve been dancing to it ever since…usually relying on someone to start it off.

This was definitely the case at my wedding when a bunch of us were asking which direction to start moving in.  There came my mother-in-law, ready to lead the charge.  She was followed in step by a bride, a groom, and a bunch of other well-dressed individuals who had earlier danced to “Baby Shark” and “The Chicken Dance.”  Before the night was over, we also did “Cha-Cha Slide” and “Cotton Eye Joe.”  Because novelty songs come in packages, friends.

And what about that dance?

In 2007, Silver filed DMCA-based takedown notices to any YouTube users who posted videos the eighteen step version.  In turn, Silver was sued by San Francisco-based nonprofit The Electric Frontier Foundation (protector of digital rights, and promoter of Internet civil liberties since 1990) on behalf of videographer Kyle Machulis in order to protect Machulis’ free speech in featuring a few steps of the choreography in a documentary posted online.

As a result of this countermeasure, the lawsuit was settled based on the agreement that the dance is licensed under a Creative Commons noncommercial license.  Silver’s new license would then be posted on any current of future website he creates that mentions “The Electric Slide.”

There’s no video proof of the Venezio-Preston wedding’s version of “The Electric Slide” floating around, but I can tell you the version we did is everyone has been doing as long as this has been an alleged fad dance.

Personally, I love doing this dance, even if I can’t remember what direction to turn to when starting it!  I’ve been doing this since I started going to school dances in fifth grade (that was in 1994), and at every wedding I attended in the 2000s.  For a song that has been around since the mid-1970s, with choreography that dates back just as far, it definitely has survived the “fad” label it was given!

You gotta know it, now you can’t hold it!

Have you done “The Electric Slide” (be honest with yourself!).  What are your feelings of the dance and its staying power after so many years?  And what about that music video?  Sound off in the comments, or be social on social media!  I’d love to hear from you!

Next week, another dance trend from around the same time as “The Electric Slide.”  Did this one have the staying power of this simple, fun, and addictive line dance?  Find out next week!