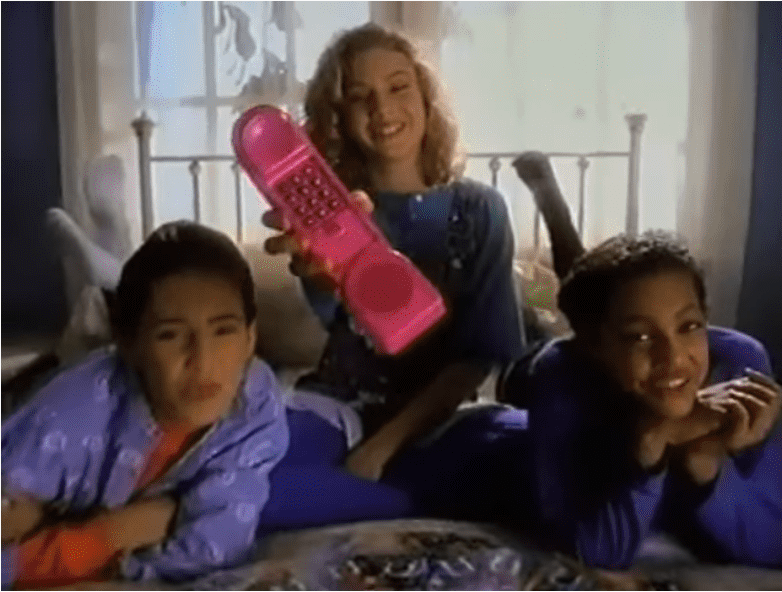 Who who who’s got a crush on you?

You’ll have to dial your giant hot pink phone to find out!

The world of kiddie board games is a strange and trippy one. We sunk Battleships, operated on a cardboard surgical patient, shopped at “the mall with it all!” with our fake credit cards, tried to figure out who committed the murder in what room, while figuring out what object they used to commit the murder, developed anxiety at a young age because the game board popped up loudly and projectiled plastic shapes in our faces, and tried to guess an identity based on their facial features, type of hair, clothing they were wearing. I devoted an entire month to board games we played as kids (see the associated links above), but even that isn’t scratching the surface of what was available to us in the game aisle. Likewise, there were plenty of games I didn’t mention that month.

I’m sure my ulterior motive was content for future articles.

Let’s run with that!

Anyway, when I was thinking about something to write about today, I recalled seeing a photo in a nostalgia Facebook post of today’s subject. This is definitely something I remembered immediately, and not just for the commercial, which is super catchy.

And speaking of commercials, in keeping with Flashback Friday, how about a commercial from the archives?

Thank you for your upload, Tyler! This will now be stuck in my head all day. Admittedly, not the worst way to conquer Friday, but now every time the phone at work rings today, I’ll be all…

Who Who Who’s Got A Crush On You?

The game is Dream Phone – excuse me, Electronic Dream Phone – and it was made by Milton Bradley (of course!) beginning in 1992. Using the aforementioned giant hot pink phone, very on trend with 1990s teenage girls, players (play solo, or up to four lovestruck girls) had to figure out which of 24 incredible guys like them, by calling his friends and getting clues.

Clue gathering involved clothing, favorite foods, places he likes to hangout, or what he doesn’t wear, eat, or hangout. The calls are private, unless someone plays a speakerphone card. And if a friend plays a Share A Secret card, the player and another player of choice could listen in together. Dialing the phone number for the correct guy, based on the clues gathered got you a “You’re right! I really like you!” response!

Was Dan your man? Or was it Bruce, Mike, Jason, Paul, Carlos, Dave, Spencer, John, Steve, Alan, Tyler, Wayne, Tony, Matt, Bob, James, or Dale? Your “Dream Phone Crush” will change every time you play, which means your crush can be any one of this incredible bevy of 1990s guys.

Of, course, winning the game meant uncovering your secret admirer and making the call that confirms it!

The original concept was designed by Michael Gray, a manager at Milton Bradley. His team was given the arduous task of creating a game centered around a phone, but no one had any ideas. Gray, who had also designed “Mall Madness” came up with the game’s concept – wade through clues to find out which boy liked the player, an idea that came down pretty much at the last minute. (source: Hello Giggles)

The original print of the game was released in 1992 by Milton Bradley (of course!), with re-releases in 1996 and 2009. The 2009 release has a phone that actually gets texts during gameplay! That version was released by Fundex games, with a box shaped like a purse!

There was also an online version of the game, and a United Kingdom version of the board game made for a 2019 world. The phones in the updated versions look less like a modern smart phone, and more like that first Nokia phone I carried in 2001.

Of course, the original phone looks like a pink version of Zach Morris’ phone on Saved by the Bell.

Sadly, “Electronic Dream Phone” is no longer on the market (trust me, I tried to find it!), but runs rampant on the secondhand market, with eBay listings ranging from $2 for replacement parts, all the way up to a brand new (open box) copy for $249. The versions listed on eBay look pretty good, and if you’re interested in a copy, and willing to pay a little more for a complete used version, then by all means, order up and call your crush!

And of course, there’s always the famous question about everything that has a tinge of personal nostalgia around it…

Did Allison Find Out Who Had A Crush On Her?

I did not own “Electronic Dream Phone,” but like “Mall Madness” before it, I have played the game! One of my cousins had it growing up, and we played it twice together – once as kids (I think we were about 9 or 10), and another time as adults. One of her friends from college came to her house when we were up visiting, and my cousin (Same age as me, two days younger) actually pulled this one out “for nostalgia sake.” I was in my early 20s at the time, and I was excited to play this. I didn’t even have to initiate nostalgia, it just happened! I’m not sure if I discovered my crush either time (way too long ago!), but this was a great game, if you like 1990s board games with over-the-top girlie appeal and pink phones that cannot be used with any phone network.

Thanks for crushing my dreams of using a giant pink phone, Milton Bradley!

Is he one of the potential crushes?

I would love to be able to attempt fate and discover my crush again. Perhaps that destiny will happen, and I’ll find a copy of the game out there.

Who who who had a crush on you, when you played “Electronic Dream Phone”?