Or did your board game night go POP?

We started off the month guessing the identity of a person on our card holder, then went on a shopping spree with our fake credit cards (which never produced real bills, which is a fantasy 100% of us have, wouldn’t you agree?).  Last week, we were strategically guessing where your opponent’s giant sea-faring vessel is parked, so you can do away with it in an updated for the 80s-90s crowd version of a classic.

This week, we’re frantically trying to beat the clock in another popular 1980s-1990s board game that (spoiler alert) still exists today, but isn’t one I’ve played in many years.

And for good reason, as I’ll explain later.

…But Be Quick, You’re Racing the Clock!

You may only have sixty seconds to solve this game, but I’ve got all the time in the world to tell you about it!

(I promise this won’t take forever!)

Perfection is a board game of strategy and time crunching.  You’ve got sixty seconds to match up the pieces on your table with the shapes on the board.  To start the game, the board is pressed down, and the timer is set.  However, if you don’t succeed and flick the switch within sixty seconds… 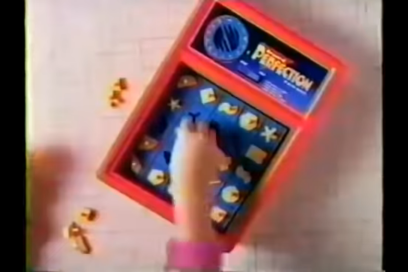 What are those pieces, you ask?

Yes, there is a piece called “tub.”

Perfection’s original form did not feature the pop up tray seen in all post-1975 versions, but instead had an ejector plate.  Once this feature was removed, the four-point star, scoreboard, pegs, and red block-out squares were removed.

…because if Monopoly can have thousands of versions, “Perfection” can have a few, right?

Superfection was released in 1975 as a more advanced version of the game, where players assemble pieces into sixteen two-piece puzzle cubes and place them in the tray within two minutes.

Challenge Perfection, released in 1976, pitted between two and four players against each other to fill their base of eighteen shapes, with the first one to do so being the winner, but with a catch – the bases are different.  This version of Perfection does not have a pop-up mechanism.

Head-to-Head Perfection, released in 1987, challenges two players to insert twenty-five pieces into their tray first and in the shortest amount of time (think Superfection, but with more pieces).

Whoever completes theirs first gets to hit the pop-up bar on their opponent’s tray to scatter their pieces.  (I can’t imagine playing that version with my brother, he couldn’t handle me getting an interception on Tecmo Bowl!)

When I was in Disney World last week, wandering around World of Disney at Disney Springs, I found a Disney-themed version of “Perfection,” with Disney-shaped pieces and a Mickey head-shaped board.  I actually had it in my hand to buy it, but put it back.

The price helped me make that decision, plus, a regular version of “Perfection” would probably get more use.

The look of “Perfection” was redesigned in 1992 and 1996, with the 1992 version getting an advertisement that changed the words to “Pop Goes the Weasel.”

It’s a down a little further, and trust me, you can wait to get that stuck in your head for all time.

So, I thought about buying the Disney version (because it looked cool), but the question stands…

Maybe that was the reason I didn’t buy the Disney version?  Fear?

YouTube archivists of the world have curated a nice, respectable collection of “Perfection” commercials, even that really annoying 1996 version.

The 1992 version, featuring a far less annoying version of “Pop Goes Perfection.”  I saw this on Nickelodeon all the time!

This commercial features both “Perfection” and “Superfection.”

The re-doing of “Pop Goes Perfection,” featuring a really annoying singer!  This one makes me think of “Perfection” if Mark McGrath was selling children’s board games.  Not sure why, as this sounds nothing like him, but this guy just gives me that vibe.

(Blame Sharknado 2 and The Soup for that.)

And finally, “Head to Head Perfection”!  I totally remember this commercial!

Next week, we wrap up board game month with a spooky board game from a very 90s childhood.  Maybe you’ve played it?  Find out next week!