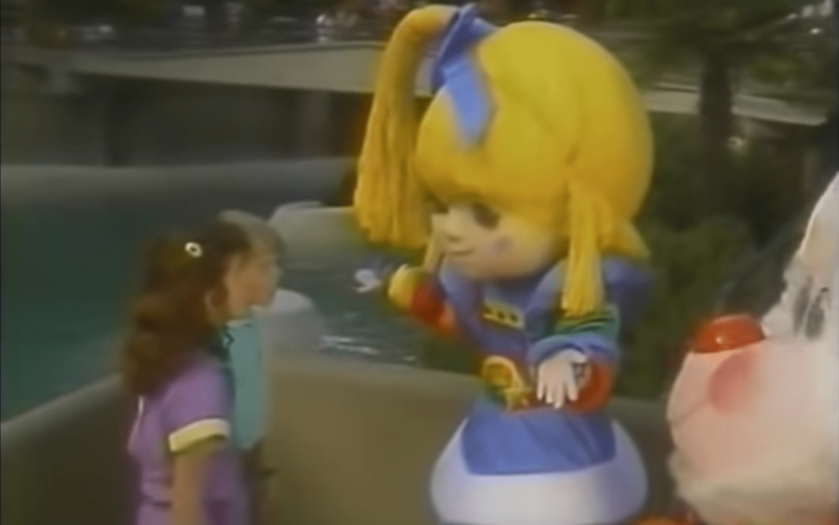 Ah, the 1980s.  When stuff like a man/woman-sized Rainbow Brite and equally-man/woman-sized characters running around a zoo as camera crews filmed the action were not for social media and YouTube.

I mean, you find that stuff on YouTube these days, but in the 1980s, legitimate home video companies released these films onto a paying public.

Last week, I talked about the history of Vestron Video, and its children/family sub-label, Children’s Video Library.  The label was responsible for, among other franchises, the home video releases of everything related to Rainbow Brite.  From the thirteen episode television series, as well as both live action “human-sized Rainbow Brite with a non-moving mouth and giant head” specials.  In fact, the only part of the franchise they didn’t have a hand in was Rainbow’s 1985 feature film, Rainbow Brite and the Star Stealer.  One of the live action specials was the nightmarish It’s Your Birthday! (I covered that on my previous blog in October 2014), and the other was an equally nightmarish trip to the San Diego Zoo. Well, if people in costumes parading around a zoo, little kids imitating animals, and a random animal fact narrator hijacking the “plot” every so often sound great to you, then…perhaps you should keep your excitement in check.

Because the two kids in the movie simply cannot. Just Another Day At the Zoo…Or Is It?

Rainbow Brite’s San Diego Zoo Adventure is a 1986 direct-to-video special featuring that human-sized Rainbow Brite costume that showed up in Macy’s Thanksgiving Day Parades for a few years in the 1980s.  You know the one – dead eyes, barely moving mouth, same yarn hair my Rainbow Brite doll has.  Her and her equally ginormous sprite, Twink, arrive at the Zoo at the insistence of two children, Pete and Tracy, as they realize the zoo’s animals are losing their colors. 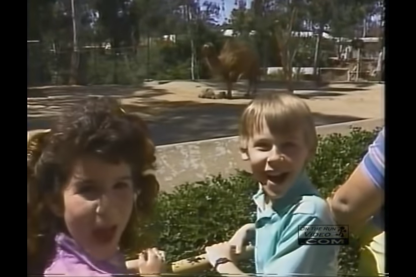 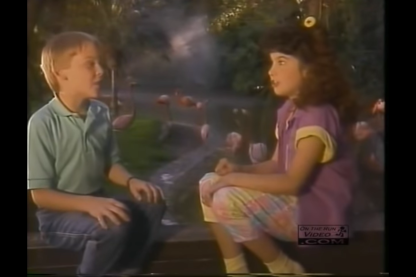 Guess who is making that happen? 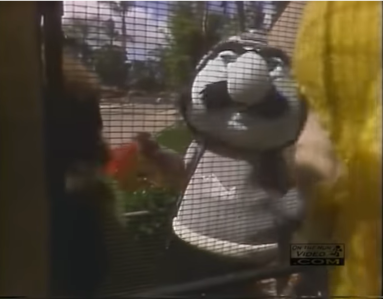 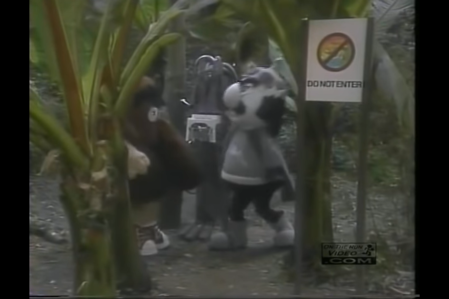 Yup, Murky Dismal (“The Despicable Desperado from the Depths of Gloom Land”) and his sidekick, Snuffalupugus – er, I mean – Lurky.  Unlike Rainbow Brite, whose mouth just barely moves, Murky and Lurky’s mouths don’t move at all.  But that doesn’t matter – Murky’s got a “gousaphone” that will turn the San Diego zoo’s animals gray…and a plan to trap Rainbow Brite and steal her Color Belt.

Pete and Tracy happen to be close, personal friends of Rainbow Brite, so as soon as they realize something is up, they work hard to summon Rainbow Brite to the zoo.  Except it plays out like Benny Hill.

I wish I were kidding.

Murky and Lurky arrive at the zoo, and bicker as they always do. They disguise themselves at tourists at the zoo (super convincingly, of course) and discuss their plan to remove the animals’ color and bring them to Murky’s planned un-amusement park…after they capture Rainbow Brite, of course. Can Rainbow Brite save the day, rid the San Diego Zoo of Murky and Lurky, and restore all the color?  Will she need some help? 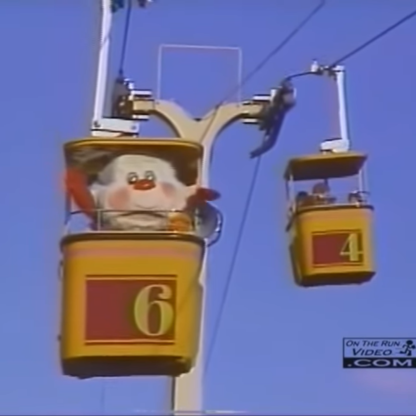 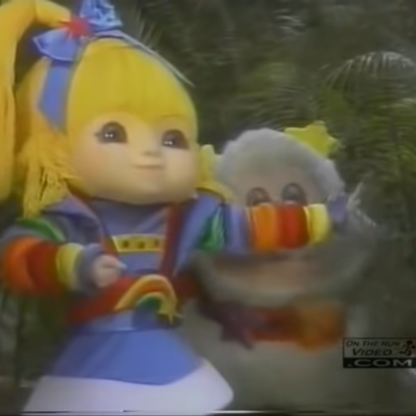 I mean, you have watched the cartoon before, right?  Rainbow Brite always saves the day, even if she needs a little help! 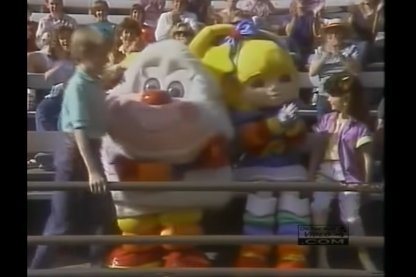 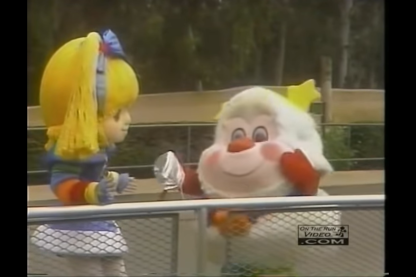 In a subplot of the video, ZooNooz facts are interspersed throughout the adventure to provide facts on different animals.  The narration, provided by voice actress Lucille Bliss, screams of fake enthusiasm.  I mean, she probably was enthusiastic, but the narration just feels…forced.

So, what is this “ZooNooz” thing? So, these segments were part of San Diego Zoo’s official publication, ZooNooz.  Several segments pop up during the course of the adventure to give facts about the animals.  The segments explain how flamingos get their color, why polar bears have hair on their feet, how koalas aren’t actually bears, and animal camouflage.  The segments break in during the course of the adventure, and while it initially detracts from the story, seemingly bringing it to a screeching halt, they are important after the adventure, in a six-minute recap of the “educational portion” of Rainbow Brite.

Any time a ZooNooz segment starts, the super cool 1980s chyron pops up on the screen. The actual story portion of the video runs 35 minutes, with the ZooNooz recap and pop quiz on the animals featured in the video comprising the last six minutes of the video.  Might as well stick around for the education part, you got this far!

As a four-year-old, this would have excited me – seeing Rainbow Brite wandering around a really nice zoo and throwing star sprinkles everywhere.  The music would have gotten my attention too, since I wasn’t always an adult cynic questioning my rose-colored glasses-clad childhood memories. 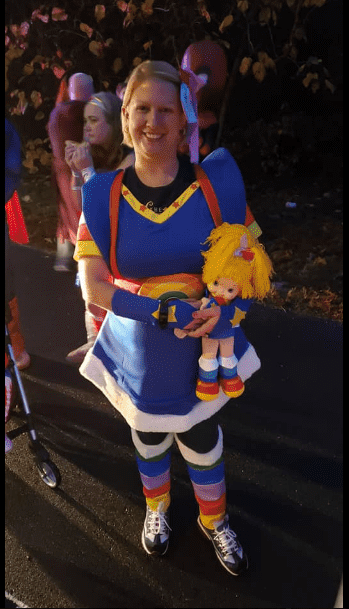 After all, I did dress up like Rainbow Brite for Halloween.  So my heart must still be the tiniest bit soft.

In actuality, I can see the appeal with San Diego Zoo Adventure – it is fun to watch.  Is it slightly over-the-top and cheesy?  Yes, absolutely!  Isn’t everything of this type in retrospect?  Yes!  However, where the Birthday video is just terrifyingly bad, this actually was fun to watch.  I laughed a little too hard at the acting efforts of the kids playing Pete and Tracy, but that’s expected when you’re an adult revisiting your childhood.  No four-year-old notices acting skills (or lack thereof), adults do (ok, cynical adults who actually care do!).  The only real annoyance for me was the narration – it just was not necessary.  I mean sure, the ZooNooz segments required explanation, since there were facts being discussed, but the action in the video pretty much speaks for itself.  That was truly the one thing that bothered me about this.

Incredible.  Of everything that I believe could have been flawed with this whole thing, narration put me off.

Of course, I always go back to the costumes.  Clearly, these costumes were put to good use when they weren’t part of the Macy’s Thanksgiving Day Parade (which Rainbow was part of in 1984 and 1985), but they’re kind of nightmare fuel.  The actual movements of the eyes and mouth are minimal (the eyes blink, and the mouth just barely moves), but the head is just…so big.  It is huge! The Murky and Lurky costumes, as well as Twink, are even more minimal.  There is no movement.  Eyes, mouth, nothing.  No movement. And I totally forgot what Twink sounded like, but I didn’t think it was the voice version of a deflating balloon.  Honestly, I kept expecting Twink’s voice actor to start choking.

In all, Rainbow Brite’s San Diego Zoo Adventure is a nice diversion.  Considering the state of everything right now, a little diversion, especially when it is the childhood nostalgia kind, is never a bad thing.  If you’ve got, at a minimum, 36 minutes to spare today (I did in the name of “research,” so you can too), why not enjoy a little childhood diversion.

And if you can spare the extra 5-6 minutes, stick around for the ZooNooz segment at the end.

So, all this “rescuing the zoo” stuff was fun, but where exactly did Murky and Lurky wind up as a result? 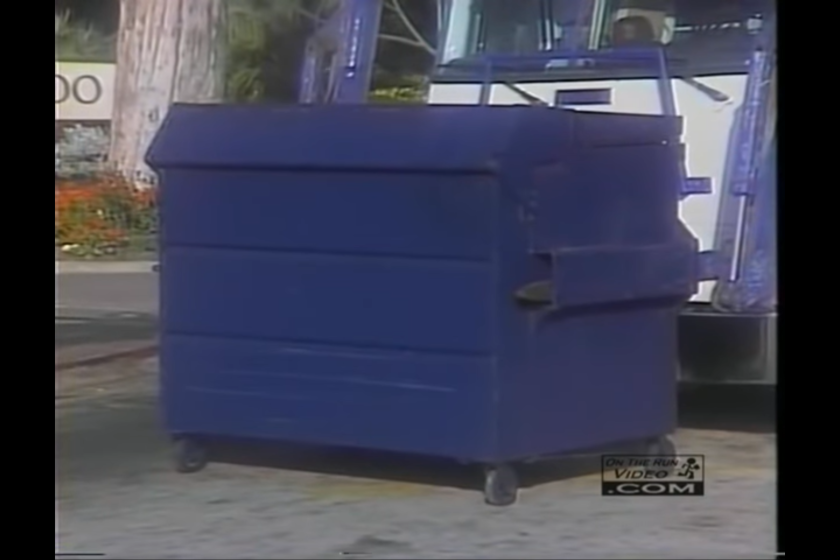 Why do I feel like this is what happened to the costumes after the Rainbow Brite excitement died down?

Have a magical day…at the zoo!