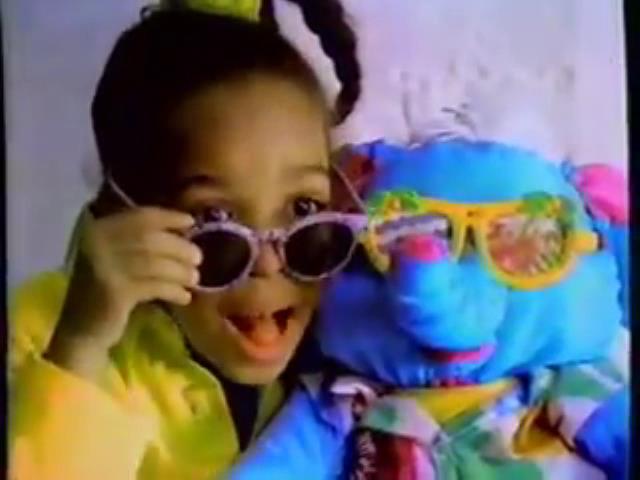 You have to shout that to get into the feeling of today’s commercial, hence the exclamation point!

When I was three years old (or four maybe?, it was sometime in 1986), I had a Puffalump.  A pastel-colored, parachute material stuffed with poly-fil rabbit with floppy ears and a cuddly body was in my collection of numerous stuffed animals and dolls.  These toys would grow and expand to jungle animals, people, babies, barnyard animals, and holiday-themed characters, as well as the subject of today’s commercial.

(The common theme between yesterday and today’s commercials apparently has to do with how squishy your toys can possibly be.)

The year was 1987, and the year-old Puffalumps line took the opportunity to cash in on the neon-colored world of the mid-1980s with loud, sunglasses and tropical shirt-clad cousins of the Puffalumps.

Straight from the Isle of Wild (don’t even ask how I remember that after 32 years!), they are the Wild Puffalumps! 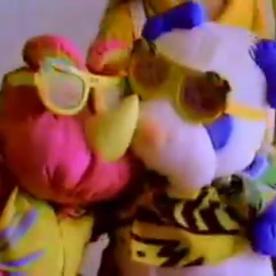 And these are the kids that love them…

…and this is the commercial that introduced their existence!

Louder than the year that brought them to life, they are the Wild Puffalumps, and their ultra-hypnotic sunglasses remind you of the pronoun that defines them!

You know, I put sunglasses on my Purr-tender once, which I’m sure was my subconscious wanting of a Wild Puffalump.  Or I just thought it looked cool. 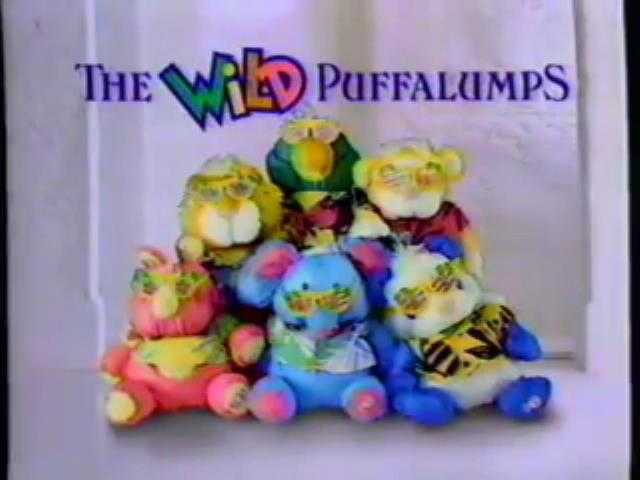 Alas, Wild Puffalump love was a short-lived one, as the lineup of neon animals was discontinued within the same year they were brought into the world. In fact, this commercial is from the holiday season in 1987, so perhaps this was aired as a last-gasp holiday purchase before they were gone forever?  I have no idea.

In 1988, after the cuddly camaraderie of neon, Hawaiian shirts, and sunglasses were discontinued, an animated one-off special was released directly to video called, simply, The Wild Puffalumps (with the subtitle Of the Isle of Wild).

I never owned a Wild Puffalump, but I did have that movie (it was only 22 minutes, so it wasn’t exactly a movie per se), and it came with stickers in its nice purple VHS box.  Stickers, my friends, are the greatest thing in the world, and better than having a Wild Puffalump plush.

Puffalumps, in all of their forms, continued to be on the market until the early 1990s, and re-emerging in 2006, only to be discontinued again in 2007.  I guess not everything gets a proper (and lengthy) comeback in our very nostalgic world.  Maybe the mid-2000s weren’t ready for parachute animals?

Oh well, it is nice to know that there actually was a time and place for neon, Hawaiian shirt and sunglasses-clad squishy stuffed animals, even if that time and place was 1987.

Oh, and The Wild Puffalumps Of the Isle of Wild?  It’s on YouTube.

You know, just in case you want to watch a 22-minute commercial for a toy that was already discontinued.

Methinks this needs a recap…