Do You Remember Tuesday’s retail month carries on!

Today, we move on from one major discount department store to another similar (and equally popular) East Coast retailer that was the Target and Kohl’s hybrid of its time.  Like Bradlees (a Target/Wal-Mart hybrid), it met with hard times and stiff competition as department stores from other regions expanded and converged on the East Coast.  By the end of the 1990s, and my childhood, it came to a sad end.  But while it was with us, it was a great department store.

We’ve got some personal nostalgia, some commercials, and perhaps a print ad or two?

The Story of Caldor

Caldor was established in 1951 by Carl Bennett, and his wife Dorothy.  Originally a second story “Walk Up and Save” operation in Port Chester, NY, before becoming the “Bloomingdales of discounting.”

Carl Bennett retired in 1985, and by that time, Caldor had over $1 billion in sales.

The Bennetts wanted to open a store that was different from other postwar retailers, selling quality goods at a lower price, with well-informed employees.  Spending their $8000 savings, the Bennetts opened their first store.  By the early 1960s, they were up to four stores, and only grew from there, with much of their growth and expansion happening during the 1970s and 1980s.

Unfortunately, as retailers offering deeper discounts moved into the Northeast (take a lucky guess which one – go on, I’ll wait), Caldor faced competition as the 1990s began, filing for Chapter 11 bankruptcy in 1995, and closed ten stores by 1996.

Caldor emerged from bankruptcy, only to declare it again in 1998, resulting in the closure of 12 more stores, mainly in the Washington, D.C. area.  By this point, Caldor’s creditors felt Caldor’s shareholders would benefit from the company’s liquidation than for it to continue operating at the losses it was in at the time.  Caldor filed for Chapter 7 bankruptcy, and began the process of liquidation and ceasing operations.  By January 1999, Caldor stopped placing orders for their stores, and on January 23rd, they began the process of winding down operations, with most stores closed by April 1999.  The final store closed on May 15, 1999.  At the time the company began preparing for its end, Caldor had 145 stores operating throughout the Northeast.

In the end, Carl Bennett’s vision couldn’t withstand competition, which was unfortunately a standard of the times.

The Story of Allison’s Experiences Shopping in Caldor

So as you guessed it, Caldor has a bit of a nostalgic stake in my own life.  I regularly shopped at Caldor, mainly in the Stafford Square location in Manahawkin, NJ (that location has been Lowe’s since the 2000s), and occasionally in the Toms River, NJ location (which is now Kohl’s) on Route 37 East.  Funny enough, that Caldor location was across the street from the Bradlees location I used to shop at.

We loved Caldor growing up. It was a regular haunt for us, the way that Target is for me these days.  They had a Nathan’s restaurant in the store, and to this day, Nathan’s french fries take me back to those days of shopping at Caldor.  Anytime my fiancee and I buy them at the grocery store, I’m always reminded of how Caldor was the first time I ever had them.

My parents actually bought their entertainment center (and kitchen dishes) from there when we moved into my childhood home in 1988 (we had just gotten a new TV prior to moving there).  That entertainment center survived two moves (and a replacement television after sixteen years), and was retired in favor of a nice new upgrade to a credenza (and a flatscreen TV) in 2016.

Like Bradlees a few years later, I never would have gotten the impression from Caldor that there was trouble coming, or that they were ever going to close.  By the time Caldor was on its way out as a company, Target had started moving into the region (we had gotten one in Mays Landing, which was 35 minutes from my house – by comparison, Caldor was 15-20 minutes away in the opposite direction), and we were going there for things we’d always gone to Caldor for.  Don’t get me wrong, we loved Caldor until it was gone, but for the longest time, Target felt like this trendy place that we really wanted to shop at (my mom isn’t crazy about it these days, but in the late 90s, it was a fun place to shop!).

I still miss the store to this day.  Getting rid of that entertainment center (which was necessary, not because it was broken, but because my mom just really wanted something more modern) felt like losing Caldor all over again.

Not enough for me to try to keep that entertainment center for my own use, but it still makes me nostalgic.

We still have those dishes (and the matching bowls, and mugs!)

If my mom tries to get new ones, I’ll protest.

“R-A-OMG, What’s that on the Scrabble board?”

In November 1998, a 44-page toy circular distributed to 85 newspapers had a picture of two boys playing Scrabble (because that’s what real kids not posing for a store’s print advertising do!), with the word “RAPE” clearly depicted on the Scrabble board (Information and Photo Source: CNN Money).

Yep, you read that right. 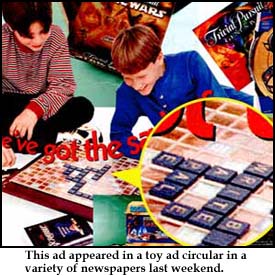 …and you saw that right.

Caldor apologized for the oversight, but by that point, Caldor was already in its second bankruptcy, and had been since January of that year.  By January 1999, they were forced into Chapter 7, which meant liquidation of their entire chain.

But at least you know this wasn’t what took the company down, though I’m sure it didn’t help at all.

The Commercials of Caldor

And rounding out our nostalgic shopping trip, how about a few commercials from the archives of YouTube Land, all about Caldor?

And Now, Your Turn!

What are your memories of Caldor?  Did you ever shop there, work there, or live near one?  Was your experience worthy of nostalgia?

Sound off in the comments, or be social and tell you story.  I’d love to hear from you!

(Readers, if you know someone who worked for Caldor, please share this with them – I’d love to hear their story too!)

Until next week (and a new/old/defunct department store), have a great day!