It’s that time of year…

It’s actually that other time of the year…back to school!

My dad made sure to share this on my Facebook page this morning, despite the fact that I’m 32 years old and graduated from college in 2005:

I only realized after I wasn’t in school anymore why this commercial was so damn funny…no more back-to-school shopping!  But during my academic career (or at least, the portion that happened the years this ad played), it was the death knell of commercials.  It was August, and it was inevitable…school was coming.  School was going to be a thing.

And parents loved it.

Every single minute of it.

This could have been myself and my brother.

This could have been my dad… 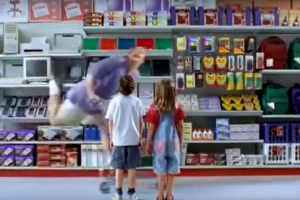 …though I doubt he’d skip in the aisles (or ride on a shopping cart).

As Not Andy Williams sings the praises of “The Most Wonderful Time of the Year,” we’re reminded of what was coming.

And it was soooo not funny.

In hindsight, this is one of the most brilliant commercials ever conceived of.  And it’s beyond me why it doesn’t air anymore.

The original advertisement (the version here is from 2005) began airing in 1994, and aside from the changing slogan, it remained the same ad EVERY YEAR.  Let me give you a little insight into the life of this ad: I was eleven when it first started airing.  Eleven.  I was those kids.  By the time this version aired, I was preparing to graduate college that fall.  And while I miss this commercial (in hindsight, of course), I don’t miss the years where I dreaded it.  As much as I enjoyed school, this ad was a bummer.  But from a nostalgic standpoint, it is hilarious.

Perhaps Staples should consider bringing it back.  Not Andy Williams and all.

Oh, and this was the ad closer to its debut, but definitely still from the 1990s:

It never needed any changes.  Ever.  Staples knew they had something great, and they rode away on a shopping cart with it.

If you are in school right now, hope it’s a great year for you.

Flashback Friday?  Throwback Thursday?  Retroist does this everyday!  And yours truly is a regular contributor – check ’em out!