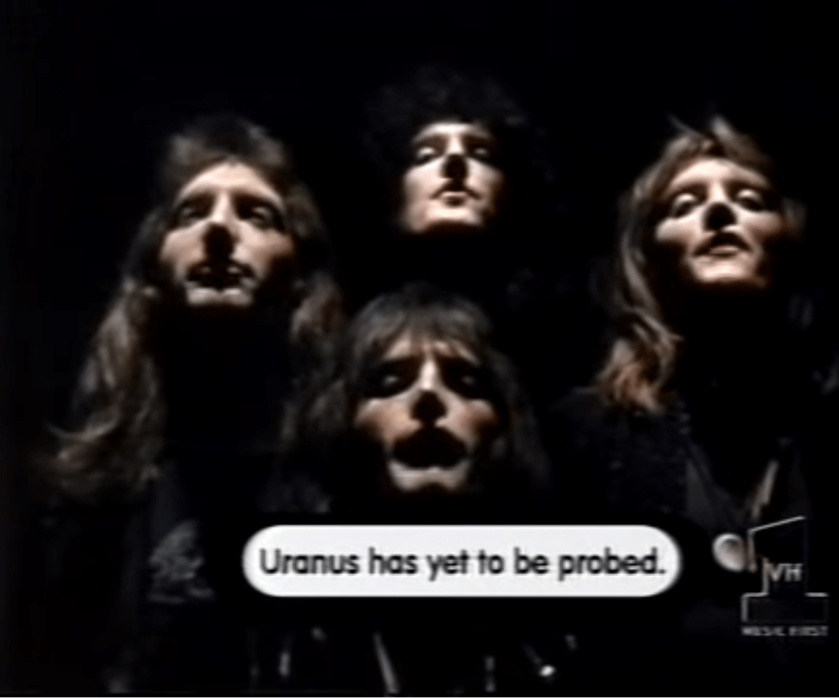 What happened to Rainbow Brite at the San Diego Zoo? What subscription-based video game service was Allison playing with in 1996? And what music-based show about facts, both necessary and unnecessary, premiered that same year?

In a featured weekly article about music, it seems unnatural that I haven’t talked about one of my favorite ways to watch music videos in the late 1990s. It had always been on my mind that I hadn’t given this its proper due, but no time like the present to do so, am I right?

What happened to Rainbow Brite at the San Diego Zoo? What subscription-based video game service was Allison playing with in 1996? And what music-based show about facts, both necessary and unnecessary, premiered that same year?

The first two questions have related articles, and the answer to the third question is VH1’s Pop-Up / Pop Up Video!

Pop-Up / Pop Up Video (stylized either way) premiered on MTV Lite – er, VH1 – on October 27, 1996, and featured music videos with a little side of annotation. The annotations “pop up” as bubbles on the screen, providing information about the music video’s production, the band/artist featured, and a few facts that are seemingly related to the topic in a Six Degrees of Separation way. In other words, I’m sure Kevin Bacon was related to at least one aspect of this show, usually a song lyric.

Oh, and this happened once in a while…

For some reason, this was so funny in the 90s.

Pop-Up Video was the creation of Woody Thompson and Tad Low, who had previously worked together on the NBC show Last Call, until it was cancelled in 1994. The duo spent the following two years pitching ideas for television shows to various networks, until late 1995 when the original iteration of the show that went to production, Pop Up Videos (yes, the original title was plural) was sent to VH1, alongside other concepts that would make use of music videos or songs. The pilot episode was then made, costing $3000 ($5,177.44 in 2021), and the very first music video to receive the Pop-Up Video treatment was Tina Turner’s “Missing You.”

Stats, demographics, medical, scientific, and historical trivia, as well as definitions, and snippets of information about the song’s context or the artist/group were part of the fun, with each bubble “popping up” with a little popping sound. As the music video ended, one last grouping of facts came up in a full-screen bubble.

There was a game within itself – spot the innuendos!

Four or five music videos would be featured in each episode, representing a then-current song, a classic, an older song, and something campy. Quite the garden variety on any given episode, but there were also themed episodes for Michael Jackson, “The Big 80s,” Madonna, U2, Culture Club, Prince, Elton John (all VH1 staples at the time), Women First, One-Hit Wonders, Halloween, Christmas, and even an episode that broke format and just showed montages of clips from various music videos.

The trend even expanded into television shows that didn’t feature music videos – Nick at Nite had Pop Up Brady for several episodes of The Brady Bunch in 2001, ABC’s original TGIF lineup season premieres in 1998 and 1999, the 1996 VH1 Fashion Awards and Divas Live, and Who Wants To Be A Millionaire in December 2000. I remember recording a Newsradio rerun from the third season, “Our Fiftieth Episode” (confirmed through an article that it aired on April 1, 1998, I knew it had to be around that time, since Phil Hartman was still alive) that took on the annotation format. A version specific to the United Kingdom aired on Channel 4, and a spin-off called Pop-Up Quiz all found their way into pop culture at a time that the series had become a veritable franchise.

For all of the fun and light-heartedness Pop-Up Video was about, the show was not without its controversy – Billy Joel, Jakob Dylan from The Wallflowers, The Police, director Mark Pellington, and Sony Music Entertainment president Tommy Mattola all complained about harsh treatment, resulting in their music videos being pulled, and referred to as “The Pops They Stopped.” However, Paula Abdul and Joan Osborne appeared on the show to provide more information on music videos that were featured on Pop-Up Video.

The show’s original run ended on August 8, 2002, but was revived for sixty new episodes that aired between October 2011 and September 2012. This version kept the format of the classic show, and also expanded into five popular Jersey Shore episodes from the first season, airing in the spring of 2012. Two seasons of the revived series aired before VH1 didn’t renew it.

Though it was called “a show for people who hate music videos,” I always loved music videos even before this series aired. As a middle schooler in 1996, I found this show fascinating. I remember learning all kinds of weird facts, not just about the video, but all of the “related” things they threw in. I watched videos on Pop Up Video that I may have never watched otherwise – Grateful Dead’s “Touch of Grey,” Tom Jones’s “If I Only Knew,” and the Rolling Stones’ “Love Is Strong” would never have been songs on my radar in the 1990s. But they got the bubble treatment, so I saw them. I may have seen “If I Only Knew” on Beavis and Butt-Head first, but Pop-Up Video made it more known to me. I watched it frequently back then, even waiting to see what the first music video was when it aired at 11 pm, right before I went to bed on school nights. I loved this show, even if I didn’t like every song.

My mom, on the other hand, hated this show and said one time that the pop-ups were a “distraction.”

A pretty popular distraction for a time in the late 1990s and early 2000s, don’t you think?

So, like many things nostalgic, this show fell off my radar until the summer of 2011, when I found reruns on VH1 Classic running in a marathon on a weekend. It seemed like between then and 2015, there was a marathon airing anytime I was laid up for some reason – sinus infections, post-surgery, and the first weekend I had to wear my first leg boot. I remember finding a newfound love for the Chaka Khan song “I Feel For You” sitting on my bed with my leg propped up. If I haven’t given you enough reasons why nostalgia plays such a huge role in my life, I submit this as one more reason.

Where do you think I learned about the bust of Lionel Richie? This happened before Behind the Music!

While I was writing this article, I watched a giant playlist of music videos covered by Pop Up Video, and on YouTube; it is one of several.

Between these two lists, they are a fun watch, even if you don’t like music videos.

And yes, there’s a few of these scattered throughout.

You know, because we were immature kids and this was supposedly funny in the late 1990s.