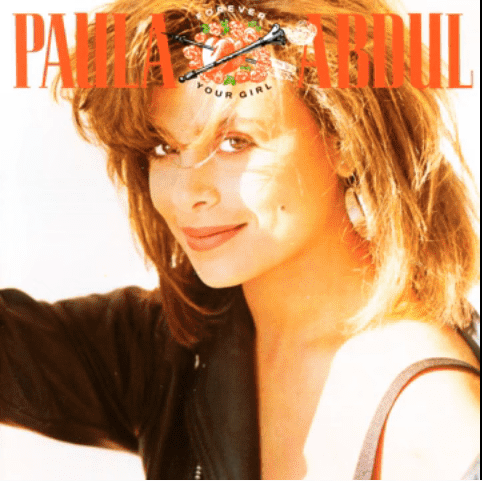 Baby pick your head up! Come on and look me in the face. ‘Cuz I can tell that somethin’ is bringin’ you down…(Why are you down?).

It may be Monday, but come on, it can’t be too bad…

Last week, I had talked about a favorite album during my teenage years, a commemoration of the first ten years of what has become an incredible singing career for one of the Jackson family members. Today, I’m shifting the “favorite cassette in my Walkman” back a few years to the OG “Favorite Cassette in My Walkman.” Sure, I got it a few years after it came out, but still, this one is a classic. And for quite a few years, listening to it made me soooo happy.

Before it became a Christmas present in 1992, it was the debut album of another prolific singer, whose choreography and fancy footwork led her to this natural course in career, that of a singer.

Forever Your Girl is Paula Abdul’s debut studio album, released on June 21, 1988. Until this point, Abdul had been a prolific choreographer for the likes of ZZ Top, George Michael, Duran Duran, and last week’s notable childhood favorite, Janet Jackson. She was also a Laker Girl, a Laker Girl choreographer, and her name showed up in movie credits (I spotted her name in Can’t Buy Me Love, which came out a year before this album). As I said, all of this was the natural course to singing, and man, what a debut!

Abdul was signed to the newly-formed Virgin Records, having worked with vocal coaches, as she was an untrained singer. Abdul’s vocal range was defined to be mezzo-soprano, and she went into the studio to record her demo, which she spent her savings to record. The result was this album, which despite a slow start, began picking up traction, finding itself at #1 on the Billboard Hot 200 64 weeks after debuting on the chart on July 23, 1988.

At the time of Forever Your Girl‘s release, it was the most successful debut album of all time, and the first time an artist scored four Number One Billboard Hot 100 singles from their debut album. Six singles were released from the album, “Knocked Out” (debut, released ahead of the album on May 4, 1988, reaching #41), “The Way That You Love Me” (August 2, 1988, #3), and those aforementioned four #1 singles, “Straight Up,” “Forever Your Girl,” “Cold Hearted,” and “Opposites Attract” (November 22, 1988, February 20, 1989, June 15, 1989, and November 28, 1989, respectively). It was “Straight Up” that took the album to breakout status in the summer of 1989, one year after the album was released, with the album finding itself in the Top Ten albums of the Billboard Hot 100 in 1989 (#3) and 1990 (#6). In addition to its distinction as the most successful debut album, Forever Your Girl was the most successful album released by Virgin Records (as of 1998), and ranks #10 in the Billboard Hot 100 Women Singers chart of all time.

Accolades for the music videos promoting “Straight Up” and “Opposites Attract” in 1989 only helped further cement its status as a more than solid debut album. It took its time, but man, when this album found its footing, there was nowhere to go but up.

I received the cassette tape of Forever Your Girl as a Christmas present in 1992, when I was ten years old. By this time, Spellbound had been out for over a year, along with an album of remixes of the six released singles from Forever Your Girl released in 1990. But that mattered not – I had seen the music videos on MTV, both from this album and Spellbound, and well, I was in love. The dancing, the music – it was a big deal for a ten-year-old who wanted to dance like the Fly Girls, but had no clue the person singing all the cool songs she loved was actually a Laker Girl. I didn’t watch basketball, so I wouldn’t have known this. Meanwhile, my husband was nine years old and living 3000 miles away from me (and about two-and-a-half hours from Los Angeles), and grew up watching the Lakers.

If you’d asked me what my favorite song on the album is as a ten-year-old, it was hands down “Forever Your Girl.” Ask me as a thirty-eight-year-old, and that hasn’t changed, but I have a fond appreciation for this entire album. There is something to love about every single – how much you can dance to each one, the choreography of the music videos, and that time we all watched Paula Abdul dance with a cartoon cat. It was the late 1980s and we’d all seen Who Framed Roger Rabbit, so why couldn’t Paula Abdul dance with animation?

As for Paula Abdul’s career, it would be 1991 before her next album Spellbound, would be released, riding high on the coattails of this album, and an additional four years before Abdul would release another album, 1995’s Head Over Heels (another goodie, especially “My Love Is For Real”). This was the only actual Abdul album I’ve ever owned, but I watched her music videos frequently on MTV and VH1, and for me, it all still holds up well.

I’m pretty sure I still have that cassette somewhere (probably with the Janet Jackson one), and for me, it will always be one of those Very Important Albums” I will never tire of listening to, so many years later.

Straight up now tell me, that I’m gonna love these songs forever.