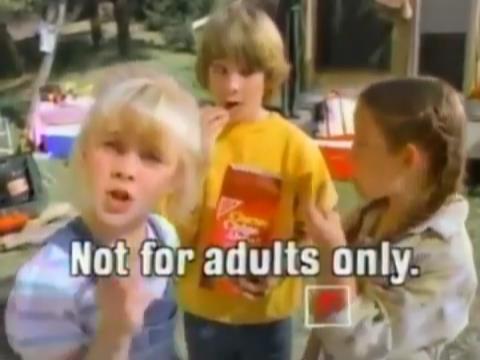 Well, I mean, it is for adults, but the advertised product is not.

Today’s Flashback Friday is a two-for-one special – two brands of cookies by Nabisco (bing!) that are so good, you’ll try to keep them from others…or steal them away from those other people!

This has less to do with “I couldn’t decide which commercial to use!” and more “these commercials have something in common, why not just go with both?”

Both commercials are from 1984, though I’m suspecting they probably aired into 1985 as well, and feature two different brands within the Nabisco (bing!) family of cookie brands.

One still exists today, a force to be reckoned with in the cookie aisle, the other rolling in on the soft cookie fad of the 1980s, and riding the wave out as the Great Soft Cookie War of the 1980s ended. What was left were the most popular, likely best-tasting brands. As for the rest – or in today’s case, one of these brands – it clearly didn’t live up to expectations.

In the first commercial, we have a cookie that is, in fact, not for adults only, even though adults will find ways to steal them from each other, with results that are clearly child’s play.

The second commercial features a filled soft cookie-type sandwich that tastes like the gooey cookies of one’s home, available in fifteen varieties, and perfect for homesick campers who don’t believe they’re not homemade.

In the Great Cookie War, battles are hard-fought, and people will stake claims in who those cookies belong to.

Chips Ahoy! cookies have been around since 1963, long before the Cookie Wars. Their soft variety, or Chewy, if you will, were first introduced to the market in 1983. They were a survivor of the Great Soft Cookie War, which saw most of the competition fail by the end of the 1980s amid lofty expectations of soft/chewy cookies tasting like fresh-baked.

I can’t confirm when they were discontinued, but it seems like they lost their luster by the end of the 1980s, as the soft cookie war…crumbled.

Admittedly, I don’t remember Almost Home (but they look good on the packaging). As cookies go, I ate EL Fudge, Giggles, Chips Ahoy!, Keebler Fudge Stripes, Oreos, and pretty much anything else, including Chewy Chip Ahoy!. My mom has said she likes a soft cookie. I do too, but only when it is warm. I’ve microwaved my Chewy Chips Ahoy! for that effect, and surprisingly enough, it does improve the taste slightly.

The best pre-packaged soft cookie I’ve ever had is Grandma’s brand. Even Mrs. Fields pre-packaged aren’t good unless you microwave them, but when you’ve been raised on the ones bought at the mall stand, anything pre-packaged is kinda lackluster.