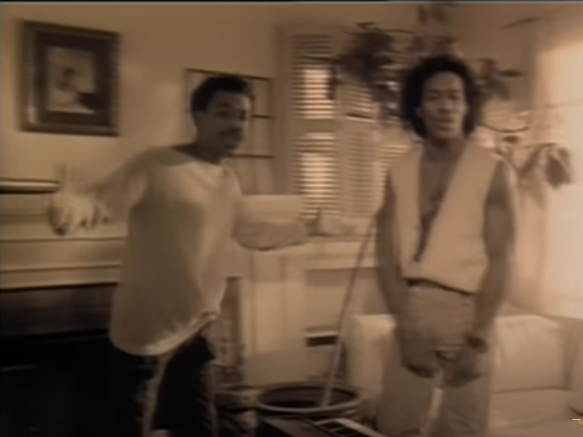 I want money, lots and lots of money.

No, this is not your loyal blogger soliciting for donations on this Music Monday.

Last week, I glossed over a programming block that a local radio station used to play during lunch hour – “The Lost 80s Lunch,” which aired from (I think) 1 pm to 2 pm on weekdays, and dug up some fairly obscure one-hit wonders from the 1980s. Today’s song, as well as last week’s “Breakout” hit by a British trio, were songs I heard on this awesome block, which really liked to tug on the heartstrings of nostalgia, at a time where nostalgia wasn’t popular, and the 1980s weren’t far enough behind us. This would have been about 1996. I remember hearing today’s song both on this programming block, as well as on an In Living Color episode (The Fly Girls danced to it), and it has always had such an appealing and cheerful sound.

It is the story of two brothers wanting so much more – their pie in the sky, a little love, peace, and happiness. Oh, and they want money, lots and lots of money.

But don’t be asking them why.

“I Wanna Be Rich” is a 1989 single by Calloway, a brother duo of Reginald (Reggie) and Vincent Calloway from Cincinnati, Ohio. The two had gotten their start in singing at the University of Kentucky, performing with a synth-funk group they created, Midnight Star, but went on to pursue solo careers. All The Way was their first effort as a duo, released in 1989. “I Wanna Be Rich” was the third and final single from that album.

“I Wanna Be Rich” reached #2 on the Billboard Hot 100 in May 1990, held out of the top spot by Sinead O’Connor’s “Nothing Compares 2 U.” The single reached #5 on the Billboard Hot Black Singles chart, and #20 on the Adult Contemporary Chart. As for the music video, I could see this one getting good play on MTV at the time.

“I Wanna Be Rich” is fun song with a great sound, with a sound similar to other songs of the R&B/New Jack Swing sound of the late 1980s. For Calloway, the single was their only top ten hit. Prior to releasing their first album, the Calloway brothers had produced singles for Klymaxx, Natalie Cole, Gladys Knight and the Pips, Teddy Pendergrass, and another sibling act from Ohio, Levert (remember “Casanova”?). However, the duo couldn’t repeat the success of their popular single about makin’ the big bucks. After the release of their 1992 album “Let’s Get Smooth” (with a single of the same name), the two weren’t getting rich off their music, and returned to producing.

Reginald Calloway is currently the Music Director of Royalty fund for Sound Royalty. I can’t really find anything on Vincent Calloway, but Wikipedia lists the brother duo as an active act, so perhaps they are still making beautiful music together.

I found this cool mashup of different dances set to “I Wanna Be Rich.” I absolutely love stuff like this – as a dancer, this always makes my heart happy.

And you know what else makes my dancer heart happy? Finding the exact clip from my In Living Color DVDs that features this song, with a different opening.

You know what else is everything?

All the things that lovers do, a pocketful of dreams come true. A little money never hurts either.