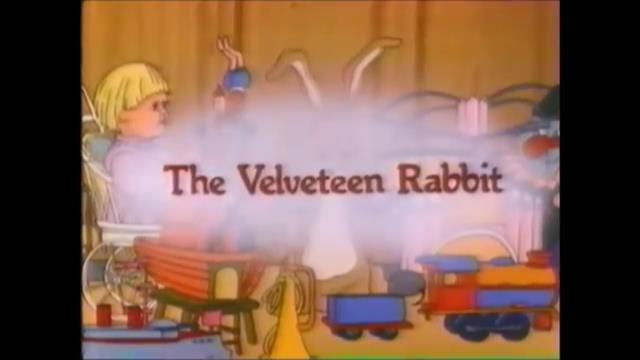 There was once a velveteen rabbit, and in the beginning he was really splendid. He was fat and bunchy, as a rabbit should be; his coat was spotted brown and white, he had real thread whiskers, and his ears were lined with pink sateen.

So opens the story of a toy rabbit whose lofty ambition is to be as Real as he feels he is, and how the boy who loves him believes him to be.

I remember having a copy of The Velveteen Rabbit.  I think I got it for Christmas in second grade.  I even brought it to school one time for a Reading class partner project in sixth grade.  It’s been 25 years, so I don’t remember what the project was.  Something to do with children’s literature.  I’ve always liked the story and the lesson taught by it.  But before I read the story of a stuffed rabbit with dreams, I saw an animated version of the story.  It was a beautifully-told story, probably one of the better kid-lit-turned-animated shorts I’ve seen.  At least, that’s how I remember it being.  Does it still hold up today?

Like last week’s treatment of Rikki-Tikki-Tavi, I’m giving The Velveteen Rabbit the benefit of a long overdue retro rewatch.

All questions will be answered, after rewatching the 1985 animated adaptation of The Velveteen Rabbit!

A Rabbit Gets The Cartoon Treatment

The Velveteen Rabbit is a 1985 animated adaptation of the Margery Williams story of the same name.  It is one of several adaptations of the story, and the second animated version to be made in 1985, the other being a special produced by Hanna-Barbera Australia and airing as an ABC Weekend Special.  The version I saw as a kid was produced by Canadian animation company Atkinson Film-Arts, part of their Cartoon Classics.  The special originally aired on CTV in Canada, and HBO in the United States, and saw home video release in the United States by Family Home Entertainment. 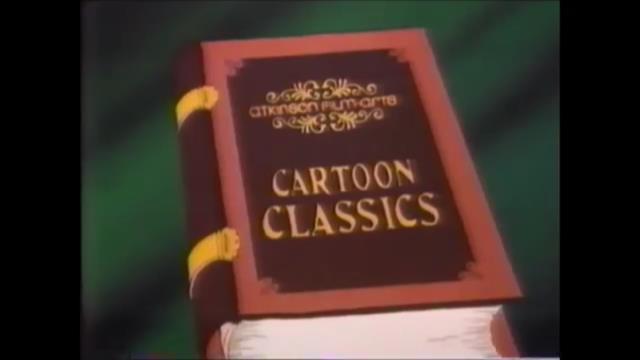 The rabbit is given as a gift to a young boy on his birthday, and taken to the nursery, where the other toys do not believe he belongs. The soldiers, in what will become a subplot of the story, move the Rabbit, who is without fancy windup mechanics and shiny paint, to the other side of the nursery, with the forgotten toys. 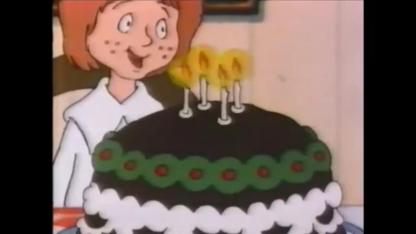 The Skin Horse, the oldest toy in the nursery, takes on the care of The Velveteen Rabbit.  The Skin Horse, a toy passed down in the story from the boy’s uncle, had been loved so much that his tail had lost its hair, and his stitches had come loose, but he believed in the beauty of the Velveteen Rabbit, and tells him that you are real if you’re loved.

One night, as a thunderstorm scares the young boy, his Nanny brings him the Velveteen Rabbit to comfort him to sleep. 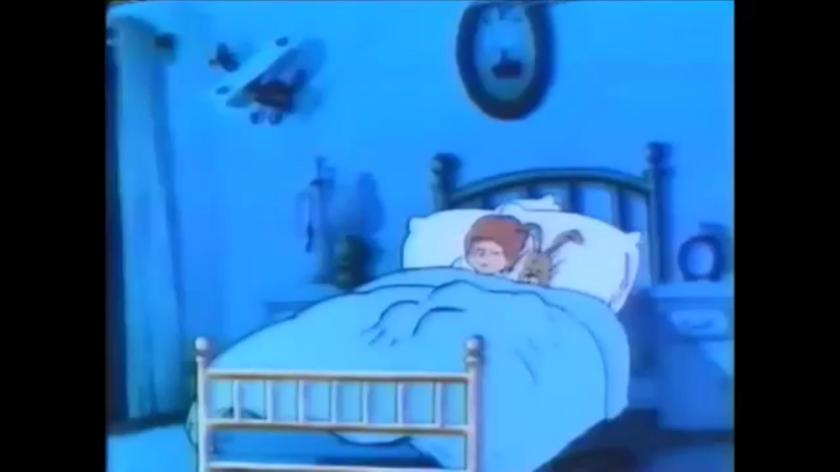 It works, and the boy and his beloved stuffed rabbit become inseparable.

And as the rabbit begins to feel the kind of Real that comes from being loved, some of the toys in the nursery resent him, especially the soldiers.  Their plan to overthrow the Velveteen Rabbit is foiled by the boy (inadvertently) when he opens the bedroom door and crushes the soldiers against the wall.

It is on that night that the boy proclaims his “old toy” to be “Real,” which is all the Velveteen Rabbit needs to hear to believe it.

The soldiers, in a subplot, continue their efforts to unseat the Velveteen Rabbit as the boy’s favorite toy…despite their growing fondness of the toy.

The rabbits in the forest discover The Velveteen Rabbit, and while they know he’s a rabbit, they question how real he is when he doesn’t respond to them. 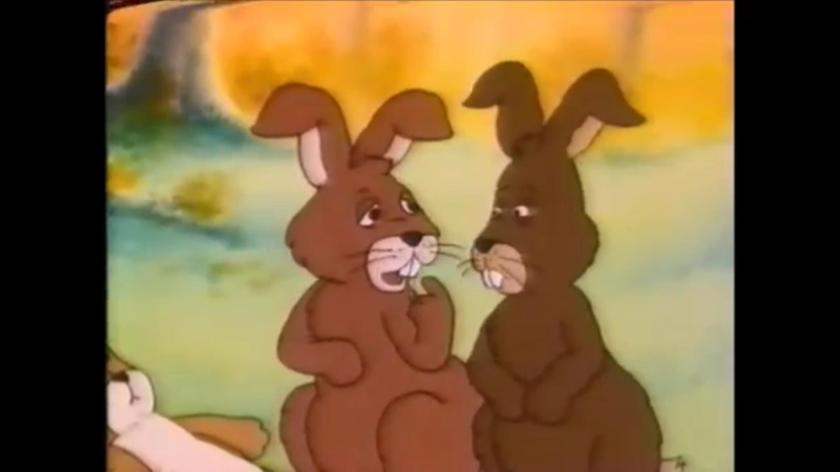 It is on the night of the sixteenth (yes, seriously, sixteenth) attempt that not only is their plan foiled, but that the boy becomes ill. 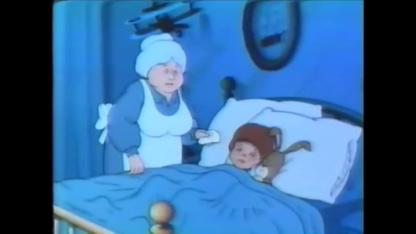 The doctor orders convalescence and isolation for the boy, and the Velveteen Rabbit stays by his side through it all, feeling as real as he ever could be by his young owner’s side.  As the boy recovers, he is to go to the seashore with his family for holiday.

The doctor orders everything in the room – sheets, clothing, and especially the Velveteen Rabbit – be removed from the room and destroyed. 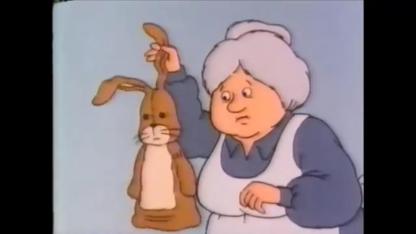 Everything is to be burned in a fire, but when this is being done, the Rabbit drops out of the sack he is placed in, and forgotten about. 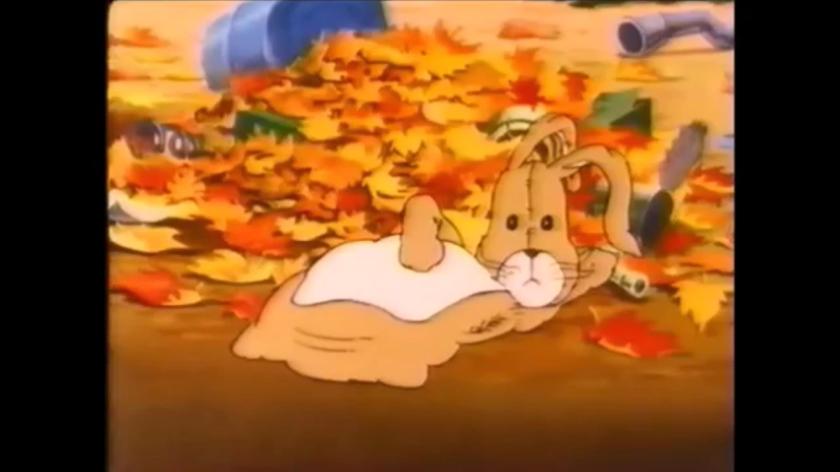 And wouldn’t you know it, the soldiers are softies and want to save the Velveteen Rabbit from being burned in the fire.

One night, after longing for the life he had with the boy, and for his friend, the Skin Horse, the Rabbit cries a real tear, which summons a fairy. 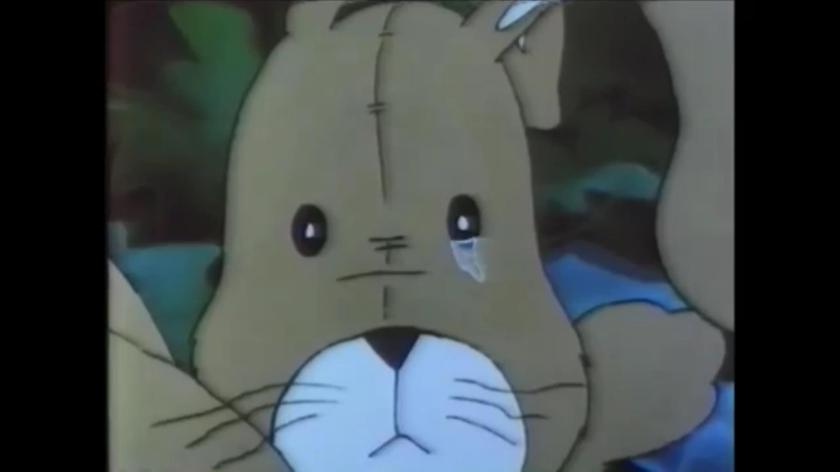 The fairy knows that crying a Real Tear makes one real, and will make the rabbit as Real as he believes he is. 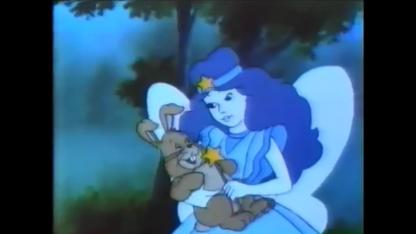 The seasons change, and in the spring, the rabbits are near the boy’s home.  He goes outside, and sees a Rabbit which looks very familiar to him, very much like the toy he loved and lost when he was sick.  The Rabbit hasn’t forgotten those times, and the boy wants him to come closer to him.

However, temptation draws the Rabbit away…

And as the narrator says, “only the Skin Horse knew the truth, but then, he had been in the nursery a long, long time.”

The story of loving a toy so much that it becomes part of your life and your every step resonates well with anyone.  We’ve all had that one very special toy (or probably many over the years) that we loved, and included in everyday play.  It kept us safe, it stayed with when we needed it the most, and to us, it was real.

There weren’t any fairies that looked like Moon Dreamers dolls, but we could probably pretend play that fairy with those dolls.

It’s not just me, right?  You see the resemblance?

As I said, I had the book when I was a kid, I think it was a Christmas present when I was eight years old.  I used it for a partner project in reading class in sixth grade (darned if I know what the project was about).  The home video of this special was released in 1987, and I probably saw it around then.  Seeing the preview on a different Family Home Entertainment video brought back memories of seeing this cartoon.

As for the cartoon itself, it is cute.  The story and dialogue is cute, and the animation is pretty standard for Atkinson Film-Arts, thankfully without ugly-looking Care Bears.  I know I said I didn’t like Atkinson’s efforts with the Care Bears franchise, but I used to watch The Adventures of Teddy Ruxpin as a little kid, and the animation on that series was quite good, and very faithful to the animation in the books.

The story here is slightly different from that of the book – the boy is given the rabbit as a birthday gift, and placed in bed with him during a thunderstorm, not for Christmas, and not in place of a lost toy as in the book.  The toy soldier subplot is obviously meant to pad out the plot, but is funny and does not detract from the actual plot.  I also don’t think the “girl rabbit” infatuation was part of the original story, as The Velveteen Rabbit just goes off with the other rabbits.  The boy still does seem to recognize his familiarity.  That makes the Rabbit feel all the more special. 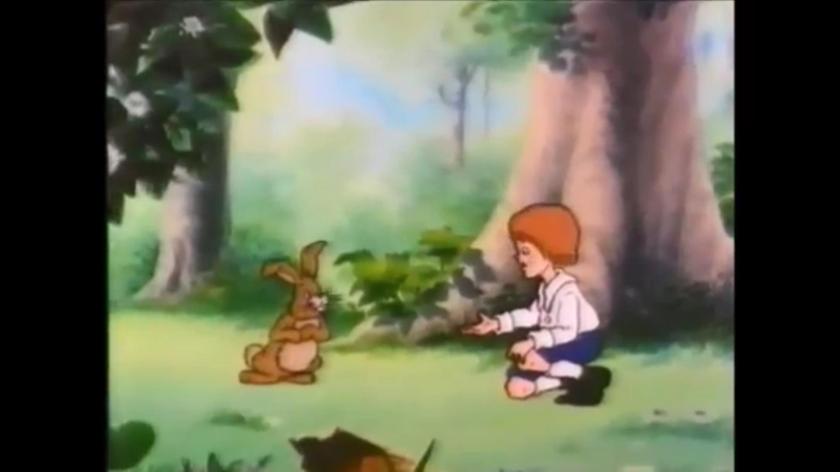 The Velveteen Rabbit himself is adorable, a cute little sack of a stuffed toy with beautiful button eyes.  The animators stayed faithful to the design of the toy through their own style of animation, and that truly makes this work. 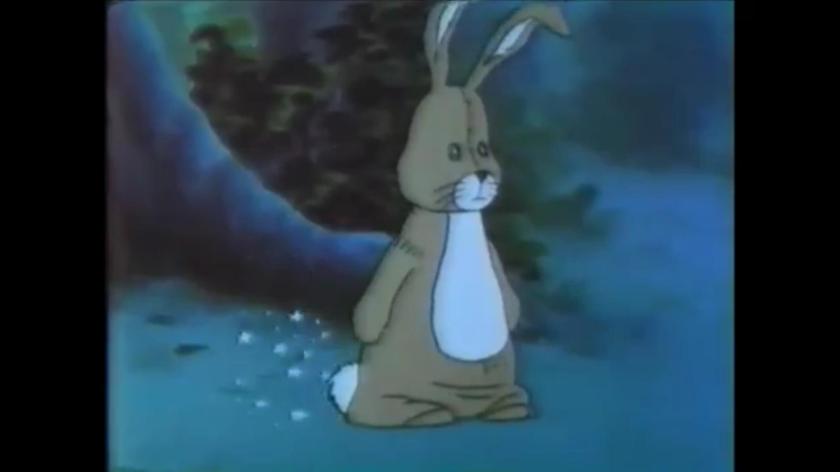 Did I enjoy it?  Absolutely.  It was worth the time.  Like Rikki-Tikki-Tavi, at 24 minutes and change, it is a quick – and adorable watch!

I had mentioned there being another animated version by Hanna-Barbera in 1985. I’m not sure if I’ve ever seen it.  I just watched a few minutes on YouTube, and it doesn’t look familiar.  I’ll give it a shot, but it doesn’t qualify for a “Retro Rewatch.”  I’m betting it is cute and in the vein of Hanna-Barbera, but I’m partial to this version.

Have you seen this version of The Velveteen Rabbit, or any other version?  I’d love to hear your stories of a toy you loved so much, it was “Real” to you!

I have a few ideas I’m kicking around for Retro Rewatches, the aim is to choose one for next week.

It is a great problem to have ideas and no clue what to write about first, don’t you think?