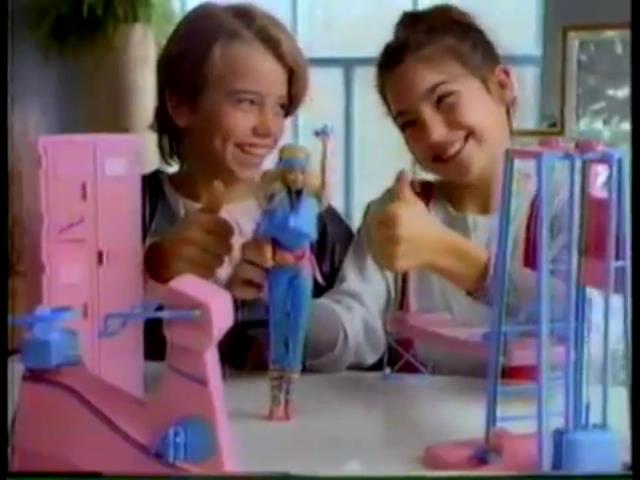 Including setting the pace for a killer Barbie workout!

I’ve covered Barbie commercials on a few occasions, and the one thing that always impresses me about the toy as an adult, even if I wasn’t a huge Barbie girl growing up (I had the toys, but my heart was set on other dolls and toys), is the re-invention and adaptation the doll makes to the decade she is in.  Love or hate the doll, she knows how to be of the times, even if her body proportions are the most inaccurate thing in the world, and obviously, she is good at sticking around.

My five-year-old niece loves Barbie, so my mom got her a Barbie convertible (you know – the classic pink one).  Maddie proceeded to break off the side view mirror on Christmas Eve, less than an hour after getting the car.  She was so upset about it.  Your writer, ever the smartass, told her (just as dramatically), “oh no, this car will never pass inspection now.”

Don’t worry, that spot in…well, you know…has been mapped out for me for at least 15 years.

She’s five years old, she doesn’t know what I was talking about.

The mid-1980s was a time of fitness and aerobics love.  Movies about aerobics, dancing, and being fit were mirroring a whole real-world trend of gym life and aerobics classes.  On the childhood level, “Get In Shape Girl” allowed the young ones to model their aerobics class-attending mothers.  And of course, Barbie needed to do it too.  She did everything else, why not workout? 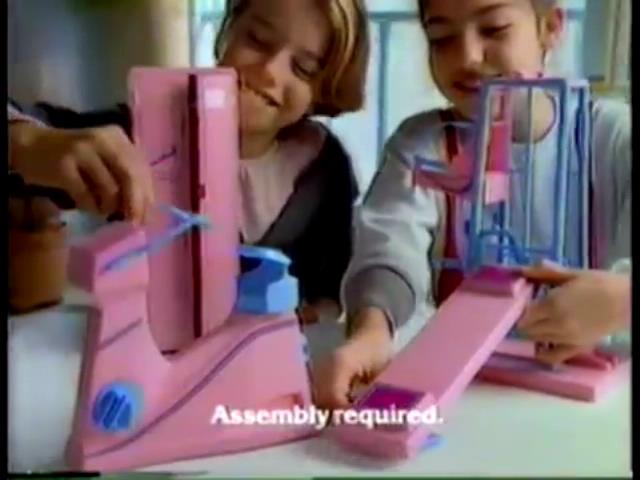 From 1985, this is Barbie’s Workout Center, and the “We girls, can do anything!” jingle is in full force!

Seriously, does anyone do leg day with the intensity of Barbie?

The Barbie Workout Center (doll not included) was first made by Mattel in 1984 to capitalize on the whole trend of fitness.

Exercise bike, weights, slant board, locker, all decked out in Pepto Pink gloriousness.  The reminder of you putting it together was said in the commercial.  Of course, they had Barbie dolls for this, so that meant just buying the workout gear wasn’t enough.  You probably had to buy the dolls too! 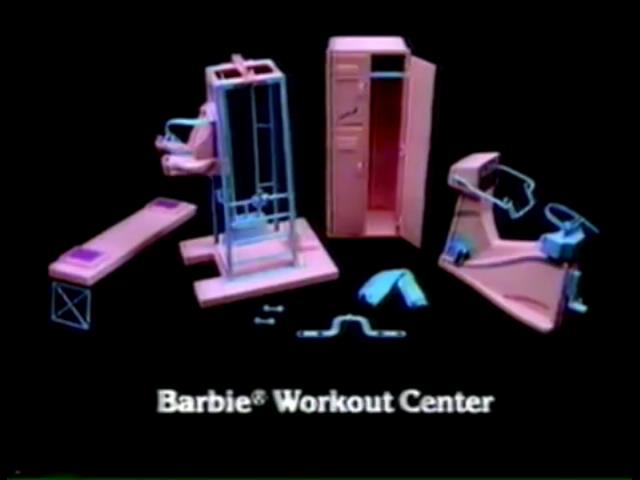 Those workout clothes were AMAZING!  And, it came with a CASSETTE TAPE!  Take that 1980s version, this had workout music!

As I said, I was never a Barbie fan, but the jingle in these commercials gets me excited as an adult.  I was a huge She-Ra fan, and that jingle makes adult me say “ooooooh!” with geeky excitement.  I’m convinced the same person wrote both jingles.

I’ve covered the world of Barbie a few times in the past four years:

#FlashbackFriday Wants To Know if Barbie Does the Lambada – Dance Magic Barbie, and her “Forbidden Dance”-style commercial.  (May 27, 2016)

#FlashbackFriday and the Rockers! (August 25, 2017) – Barbie’s answer to Hasbro’s Jem and the Holograms!  I actually had Barbie and the Rockers toys, and I liked them best because of the whole Jem obsession!

#FlashbackFriday and the Rockers…The Sticker Album! (April 27, 2018) – Stick with Pannini, and this Barbie-themed sticker playset!

On a more personal note, I considered scrapping the Throwback Thursday and Flashback Friday articles this week.  My best friend, Amie, passed away suddenly on Tuesday night (I had the Tuesday morning article scheduled by Monday afternoon), and I didn’t have alot of inspiration yesterday to work on anything.

As I’ve found in the past, one of the ways I’ve found worked for me to cope was to work on things I love, and the knowing that she would never want me cancelling blog posts because of her.  She was a child of the 80s too, and I know she would absolutely go nuts over these commercials, which made it easier to actually put them out there.

I’m getting my thoughts together the best I can, so I can write something about Amie.  I want to make sure it is perfect, and well, a fitting writing.  She wouldn’t want me to do that, but I must.  She deserves nothing less, an incredible person with good taste in pre-wedding celebration shirts.

How the heck I ever deserved her is beyond me.

Amie, we love you and miss you.

Coming up tomorrow on Flashback Friday, a 1980s Barbie that screams of another mid-1980s trend, both in fashion and occupation!