From the time I was a toddler (I was fourteen months old on my second Christmas, which was also memorable for me taking my first unassisted steps on Christmas Eve) until I was five years old (so, 1983 until 1987), I always wore cute jumper dresses – not all of them were Christmas-esque, but they really seemed to be a popular style of toddler/little girl dress.  For four years of my life, they were the standard to dressing me for Christmas. Be they corduroy or velour, they were the outfit of choice.

Until I was twelve years old, my clothes came from Kids R Us, which closed in the early 2000s (I believe 2003).  Think Toys R Us…but not fun unless you like clothes.  I’d also like to think that having several different outfits in several different designs each year (while maintaining the very basic design concept) and colors set me up for my burning need to buy the same shirt in several colors.

Variety is only the spice of life as long as it comes in at least five colors, friends.

I was going through pictures in October (while finding the picture of my first Halloween costume), and I made sure to take some pictures of my Christmas dress photos.  I knew they would come in handy for blogging material.

Since much of this month’s emphasis is on personal nostalgia and personal stories, these dresses fit right in! 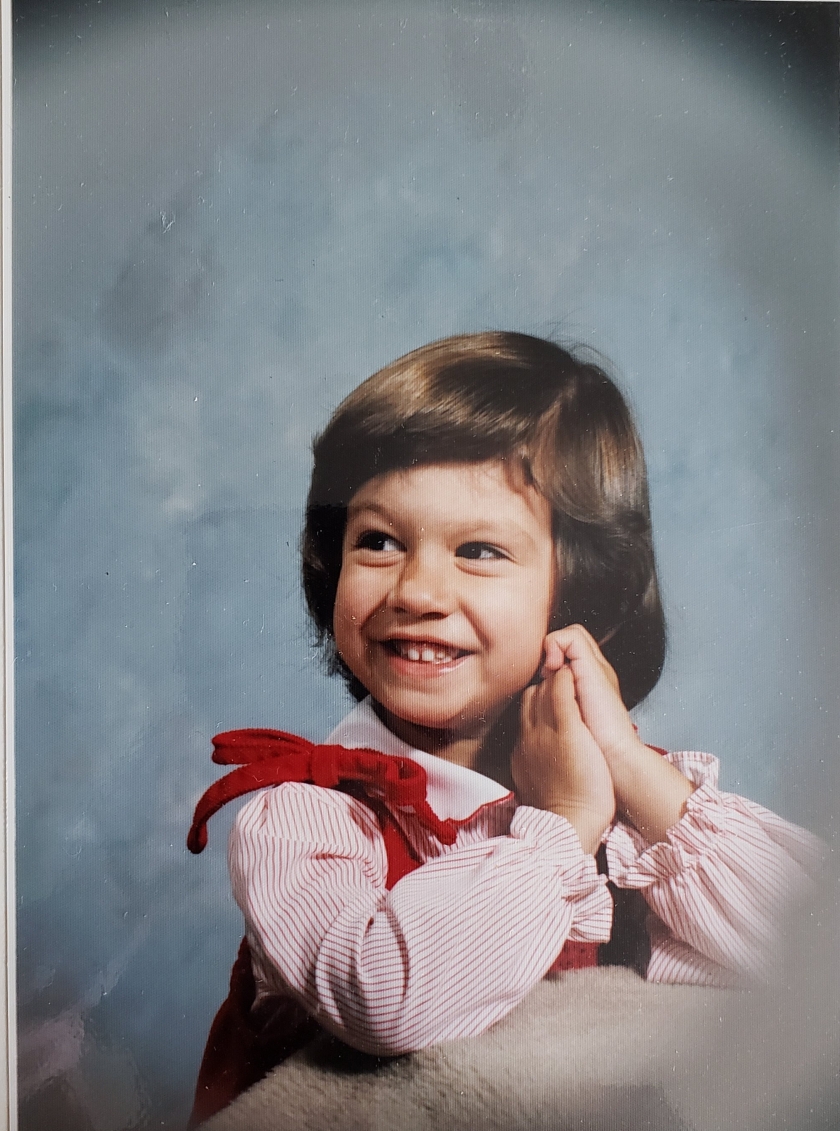 This photo was part of a photo gallery my mom created in the upstairs hallway of my childhood home.  It was the ultimate display of cute and posed portrait studio photos, taken between the ages of 18 months and 9 1/2 years old.  The display was legendary, if for only one reason…I was fourteen when she put the photos up.  That’s right, my parents repainted the upstairs hallway, and it was time to put up the gallery of “look how cute you were when you were little!”

Our friends used to laugh at the photos – not because they were awkward or terrible (they weren’t, my mom’s “perfect babies” did not take bad photos!), but all the standard 1980s photo techniques were on display – floating heads, black backgrounds, the fall scene, the fireplace, props, my brother at 18 months shrugging his shoulders and doing the “what?” gesture in his first professional photo.

Come to think of it, that’s the one our friends laughed at!  Not my adorable display of cuteness in this red dress.  No way!

Man, that went off the track fast!

Meanwhile, staying in 1985, this was the Obligatory Christmas Eve Photo from that same year, complete with a different dress! 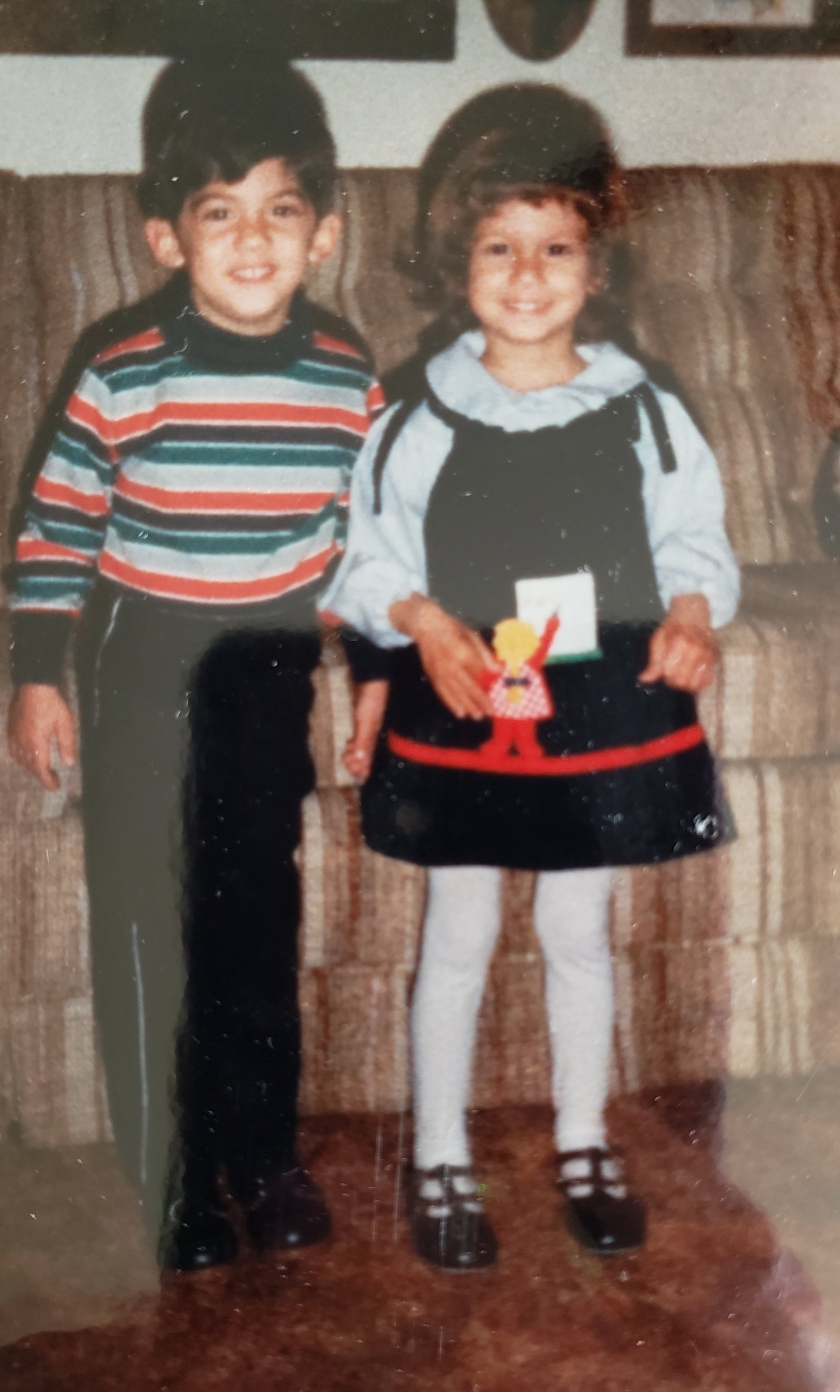 Skinny legs = baggy tights.  My mom has told me that getting tights to fit on me was difficult.  You’d never know that these days, with my giant calves (all muscle!), but until I was thirteen, I had some toothpick legs!

Moving ahead a year, and two different dresses!

It’s Christmas Eve with these four-year-olds, all ready to go to Grandma and Pop Pop Venezio’s house for dinner and visiting with cousins!  My memories are really scattered with this Christmas, but man did we look cute!

We’re fraternal twins, and have never really looked alike, but those smiles are pretty similar!

This was also the first Christmas that I wore knee-high socks, something I would wear for Christmas for years, on account of the skinny legs!

Christmas Eve was all about that cute red dress, but Christmas Day meant a different – and green – dress!

That is a kid who is clearly excited about Christmas (held at our home – a yearly tradition when we lived in this house!).  That Pound Puppy dog house and “Hungry Hungry Hippos” were great presents, which definitely sums up that smile!

And for the final jumper dress, we move forward to…

This is the first Christmas I remember more than just a few memories.  It was the last one in this house (we moved in the summer of 1988 to the house I would live in for 18 years, until I was almost 24 years old), and the last one where my mom’s extended family came for Christmas. At that point, Christmas Day meant spending it with my two cousins, Erin and Craig (who are playing the game with me), my Aunt and Uncle, and my maternal grandparents.  The other two people in the picture are my cousin Sandy (holding the “Monster Mash”  Monster Maker Machine) and Sue, my cousin Kenny’s wife (holding the instructions).  I’m sure my brother was playing too, but he’s not in the photo.

As for that dress, I remember it had a dog printed on it.  Also of note is the doll sitting on the couch – this was the Christmas I received one of my favorite Christmas gifts of all time.

This was also the Christmas I received a Cabbage Patch Kids pillow that my cousin Erin made for me – I still have that pillow so many years later, even though it isn’t as comfy as it was when I was a little kid (it’s every bit as comfy as a 32-year-old pillow is expected to be).  I treasure that pillow – I’ve got to get it from my closet at my parent’s house and send her a picture of it.

Christmases after that were always as memorable and lovely as the ones in these pictures.  We moved to my childhood home (as I always refer to it) in 1988, right after I turned six years old.  We had our first Christmas in that house that year (almost two months after we moved in), but it was the last one there until I was in high school.  Christmas Day was spent at Grandma and Grandpa Nesgood’s house (maternal grandparents), with our cousins and and aunt and uncle.  I’ve got pictures somewhere of those Christmas Days and all their associated outfits/dresses (sans jumpers).

As I said in my Christmas Vacation memory, I really miss those days.  The dresses were great, but they were only a small part of what made Christmas so special.  Be it the family togetherness, gifts, dinner, or just the fact that it was spent with my grandparents (who’ve all passed away), those Christmases were special.

I really miss it all, including the cute dresses.

Oh, and those twins in the adorable photos… 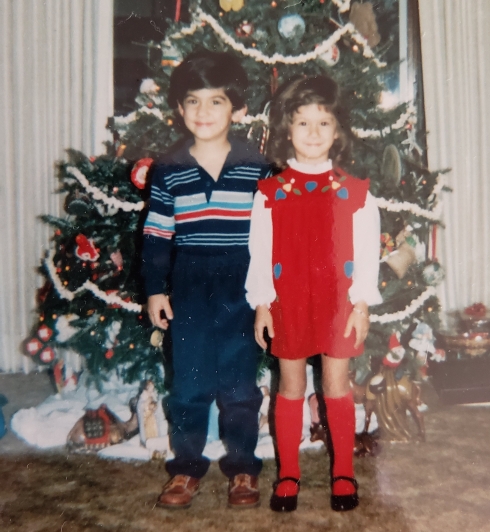