January 29, 2019 Allison L. Venezio-Preston Do You Remember?, food and drink, Nostalgia One comment

And some aspects’ advertisements are music video-like.

Shouldn’t all consumer goods be advertised loudly and in your face?

The marketing strategy behind all “clear” products had one purpose – equating purity and freedom from artificial dyes, ingredients, and flavorings.  Not only did this craze extend to consumable goods (aforementioned hygiene products, soda, and beer), but also to appliances.  Some products were successful, and others met a swift death as fast as their name came to market prominence.

Let’s focus on the Clear Beverage trend today, and three products that fell into the wild times of transparent imbibing.

It’s cola, not uncola, and it tastes…LIKE PEPSI!

I remember Crystal Pepsi super well, if not for the product itself, but the music video disguised as a commercial to promote it…

The line was so blurred between Van Halen’s “Right Now” music video and this product that we had no clue which was which, but OMG, Pepsi was CLEAR! 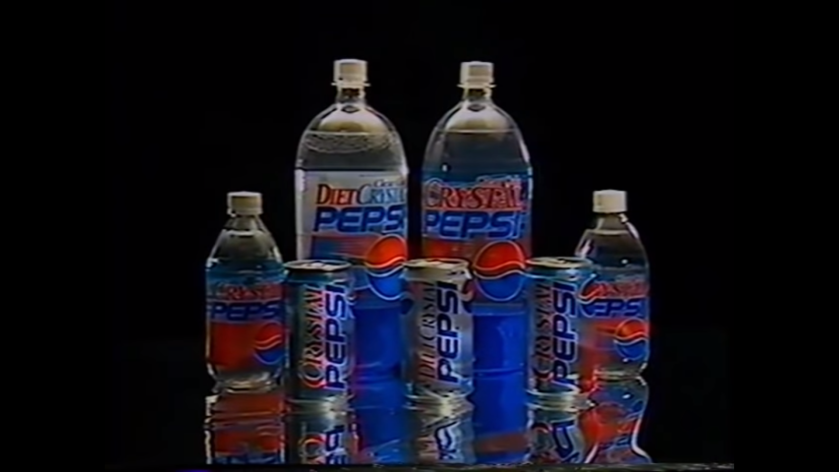 Test marketed in 1992 and given its full release in 1993, Crystal Pepsi was a profitable (and “clear” choice) of the Pepsi Generation.  Clear soda wasn’t new or novel, but clear soda that didn’t taste like lemon-lime, but instead tasted like actual cola was a novel idea.  Eighteen months in development lead to this amazing breakthrough in soft drink awesomeness. Yes, I did try it in 1993, but it was hard to get.

This was also my pre-allergic to caffeine days, so I could still have caffeine.  Not that I knew the difference, but I remember this not having caffeine.  The best part about Crystal Pepsi was if I wasn’t able to have caffeine when it was originally on store shelves, I would have had another option in soda drinking.  By the time I could only have clear soda, root beer, and almost any orange soda (except Sunkist – never understood that one), Crystal Pepsi was long gone.

So…what happened to Crystal Pepsi?  Well, for one thing, not-so-stiff competition from Coca-Cola, which marketed a rival “Clear Cola” called “Tab Clear.”  The intent was to kamikaze Crystal Pepsi’s sales by unleashing their meant-to-backfire soda.  The result ended the clear cola product lines of both major soft drink companies by 1994, without ever really getting the chance to take off.

Unlike Tab Clear, Crystal Pepsi it has made its return a few times (once as recently as last year).  This time, though, it brought caffeine and preservatives with it, two things that were not included in the original formulation.  I saw bottles of it in Target last year and was saddened that I couldn’t try it just one more time.

I found a training video on marketing Crystal Pepsi to stores, and let’s just say it will get the Retroist treatment because of its discovery.

So, whatever happened to Crystal Pepsi’s competitor? In 1993, Coca-Cola, in an effort to compete with the success of Pepsi’s clear cola, created a clear version of their “lesser” brand, TaB Clear.  TaB, for those not in the know, was Coca-Cola’s Diet drink in the pre-Diet Coke (introduced in 1982) world.  TaB, which had been around since 1963 and saw limited release flavors, did not have a clear variant until Crystal Pepsi was introduced.

In an effort to backfire Crystal Pepsi (and their “we knew this wouldn’t work” product), TaB Clear was introduced into a market that saw Crystal Pepsi enjoy popularity…only for both products to die swift deaths in the marketplace of sodas.

TaB Clear, like Crystal Pepsi, were both discontinued at the end of 1993, and left store shelves in 1994.  Being eleven years old at the time, I was not a diet soda drinker, so I never even knew TaB Clear existed; yet, I was familiar with (and had tried) Crystal Pepsi.

Heck, I had no clue TaB was even still available today.

The commercial for TaB Clear was interesting, but by no means was Crystal Pepsi’s in-your-face music video worthy of Super Bowl ad space.

From clear cola to fruity clear fizzy drink amazingness that is delightfully Canadian, we move our taste buds north and to another “soft drink” of the Clear Craze!

Clearly Canadian: Let the Water Take You There 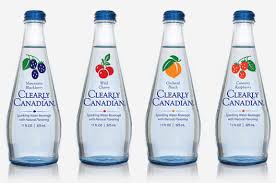 Oh, how I loved Clearly Canadian!

I was introduced to Clearly Canadian while eating at a local chicken restaurant in the town I grew up in – they sold it in their refrigerator case and wow, was it delicious!  Now, this was in the early 1990s, and what I didn’t know (until now) was that Clearly Canadian had been around since 1987, the product of British Columbia’s Gordon Sim and Doug Mason (among others).  I knew it has been reintroduced recently online, but didn’t know (again, until now) that it had never actually went away.

The last time I recall drinking Clearly Canadian was right before I started high school – which was 1997.  I was particularly fond of Wild Cherry and Mountain Blackberry (two flavors still in the lineup today).  It was one of those drinks that appeared in mainstream movies and television shows, and was one of those “new-age” drinks that everyone knew, loved, and drank.  And like that, it sort of left our consciousness and fell into an “out of sight, out of mind” state. I’m glad it made a comeback, but since I haven’t been able to find it, I’ll never get to enjoy the taste of Canadian sparkling water awesomeness again.

From Fruit-Flavored Canadian Awesomeness and Clear Cola options we move on to clear beverages of the clear persuasion. 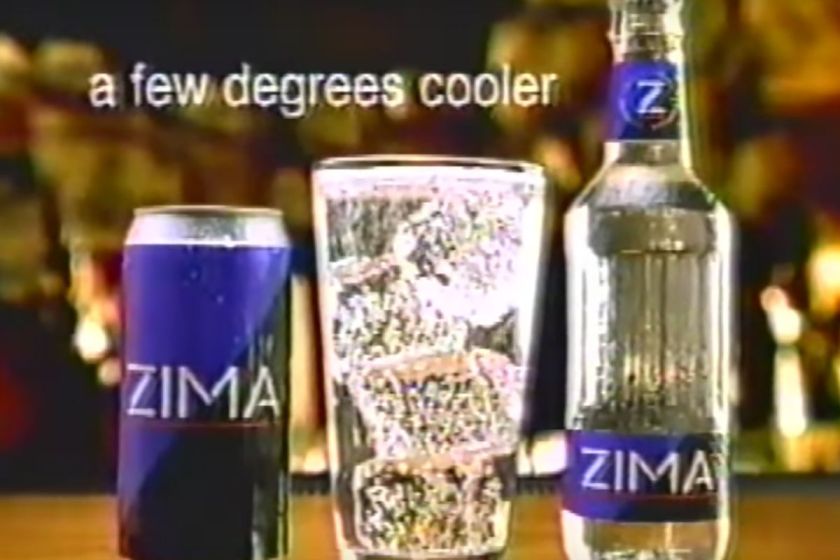 Who didn’t know about Zima in the mid-1990s?  Coors introduced their clear malt beer to test markets in 1991, and later everywhere in 1993.  A lemon-lime flavored clearmalt by design, Zima was this “hipster” adult beverage in the world of the early 1990s Clear Craze.

And lucky me, I did get to take a sip of one of these at a younger age.  Just a sip, mind you, but I know why it was so trendy!  I was eleven, it was a Fourth of July party, and my dad brought the Zima to the party.  He, my mom, and my best friend’s (at the time) mother were drinking it after fireworks, and allowed myself, my brother, and my friend to all try a “small sip” of it.  Growing up in early 1990s and watching alot of commercials that would appeal to anyone, we knew what Zima was, and felt so cool being able to try it.  Even if it was only a small sip, it was still “so cool.”

Zima, like Clearly Canadian, never really went away, but had limited production runs in in 2010 and 2017, but has officially been discontinued as of 2008.  I’m pretty sure it was what I wanted my first legal drink to be at 21 (the same way I wanted my “I turned 18 and this is my right of passage” movie to be Beware, Children At Play!, since you had to be 18 to rent it – but that ended disappointingly), but alas, I had a Pina Colada instead.

No really, you went away so fast, I hardly knew you existed once you didn’t.

But we’ll always have this commercial to remember you by.

Which makes the product look kind of hipster and, well, douchey.

Wow, this was actually cool at one time?  Because these aren’t the kind of people I’d hang out with to eat burgers and drink malt beer.  Just sayin’.

Stop making vegetarians (and like me, semi-vegetarians) look bad, lady!

Moving Beyond the Clear Craze: Afterthoughts 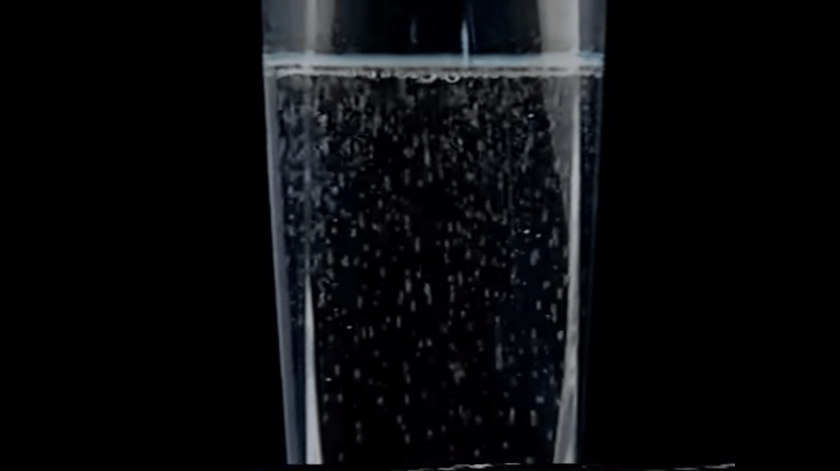 The 1990s was an interesting time.  It was Generation X’s turn to shine, we were growing up and coming of age.  Advertising looked like the music videos we watched on an all-music (or by that point, almost all-music, but some programming) MTV, and our drinks (and other assorted inedible consumer products) tried to be transparent and delicious.  It was a great time to be alive.

And Millennials hate us why?

They just missed out.

So, now I ask you: Did you ever try any of these clear alternative beverages of the Clear Craze Age?  Were you old enough to drink Zima?  Did Crystal Pepsi taste like Pepsi to you?  And what about TaB Clear?  Did that make it into your market alongside Crystal Pepsi?  Was Clearly Canadian fruit-flavored Canadian Awesomeness?