Before SEGA Channel, the internet as we know it, streaming video. and online gameplay came Intellivision’s PlayCable!

Special thanks to Twitterverse friend Matt Bolton (@Eagles409) for sending me the link for something I otherwise would never have looked up!

In The Beginning…and Beyond That…

The current state of the internet, and all the secrets it holds, never ceases to amaze me.  I’m always as blown away by the things I find in 2019 as I was in 1997, logging onto Netscape from my home computer and spending as much time as my 56K dialup modem could possibly allow.

These days, my internet is cable-based, not America Online, and much more than it was when I first got an internet connection in my house.

My video games are also pretty, detailed, but sometimes of the nostalgic persuasion.  They also still involve cartridges, but nothing like what I played with as a kid.  And I throw in a little emulator gameplay here and there.

When I was thirteen years old, I subscribed to SEGA Channel (well, it was for both myself and my twin brother), and that was cutting-edge for the mid-1990s.

As for the menus…

Unrelated, but still a personal video game tidbit: I dropped a contact lens out of my eye in seventh grade playing Super Mario Kart. Because you needed to know that.

Anyway, before SEGA Channel unleashed fifty (later 70) games each month (later bi-weekly) on us for $15 per month (plus the $25 one-time activation fee at the beginning, which included equipment) between 1994 and 1998, a different system tried their hand at it much earlier (no, not Japan’s answer to SEGA Channel from 1990) than SEGA did.

That system was Mattel’s Intellivision, and that service was PlayCable.

Intellivision PlayCable was introduced in 1980, and like SEGA Channel fourteen years later, allowed cable companies to provide games via cable wires to an adapter.

PlayCable was a joint venture between Mattel and General Instrument, and development began even before the Intellivision had a wide release.  Testing began in several cities in 1980 (Moline, Illinois, Jackson, Mississippi, and Boise, Idaho), and was officially launched in 1981.

The Specifics…and The Downfall

The PlayCable was subscriber-based, and incurred a monthly fee for access to up to twenty games per month, for $12 per month (plus the $25 activation fee – this is $63.15 as of 2018) .  The service was available to thirteen cities upon its launch, and by 1983, 650,000 subscribers had the service.  This was less than 3%, but that subscription rate was still higher than the rate of Intellivision sales where the service was not available.

The cost of the adapters and computer needed to provide the games, the inadequacies of the adapters when it came to downloading larger games, not to mention the video game crash of 1983, all contributed to the quick downfall of the PlayCable.  The service was discontinued in 1983. 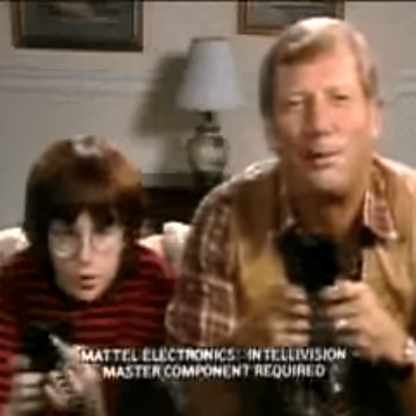 When the service started up, Intellivision employed the pitchman talent of Mickey Mantle to promote the service.

Because nothing says “sell a video game service!” quite like The Mick.

I guess to some extent, it was successful.  Marginally, but still, successful!

The Intellivision in Action

The beauty part about YouTube, as I’ve said on many occasions, is the uploading power of the people.  By some amazing and very expert skill, people have actually managed to get the Intellivision PlayCable to work (via the magic of emulator, of course, not the actual service), and that’s how we’re going to close out.

What a high note!

This one is the title screen, which played the song “The Entertainer” during the later days of the service.  If you have the opportunity to do so, check out the video description that explains this, and other songs included on the PlayCable menu screens.

I guess PlayCable felt they were “the entertainer?”

I promised leaving you on this high note, but I saw the commercial where Mickey Mantle sticks his tongue out at the little girl, and well, there couldn’t possibly be a bigger way to go out.

The Mick, boys and girls.  His stiff competition in baseball isn’t the Red Sox, it’s a little girl.