It’s Music Monday, and I’d ask you why don’t you come to your senses, but Monday is not just a state of mind.

Of course, I’m sitting here writing this with snow falling outside, and for a moment, considered changing the song choice for tomorrow (to something more “snowy”), but I was listening to this song a few days and ago and decided to stay the course with it.

Plus, the use of it came to mind while writing my Seinfeld article last week, so it was all more what I wanted to do versus the timeliness of it.

Based on my music playlist, I’d say I have a deep and abiding love for 1970s classic rock – from Chicago, to the Doobie Brothers, to Kenny Loggins, and even the Eagles, any of these groups will make me tell you to shutup so I can listen to their music.

Ok, not really, but that’s what happened in the Seinfeld episode where Elaine’s boyfriend hushed her everytime “his song” came on. “His song” was a well-known (coined their “signature”) song by an iconic 1970s classic rock group, about a cowboy who chooses not to find love.  Really sad, really romantic, and quite deep, this song would go on to become one of the Eagles’ most well-known compositions, without ever getting an actual release.

“Desperado” is 1973 single from the Eagles 1973 album of the same name (their second album since forming in 1971, and the only one in which they appear on the cover).  The title song was never actually released during the album’s original release, but instead, “Tequila Sunrise” and “Outlaw Man” were.

The song was written by Don Henley and Glen Frey (based upon a song Henley had started writing in 1968 about a friend named Leo, but later finished with Frey after expressing interest in co-writing with him), and was ranked #494 (of 500) of  Rolling Stones’ Top 500 Greatest Songs of All Time.

But you don’t want to hear all this, you’d rather hear the song, right?

I have to laugh looking at the album cover, because Glenn Frey looks like a Bandido who will steal your heart and kill your boyfriend/fiancee/husband. It’s the mustache, I swear! 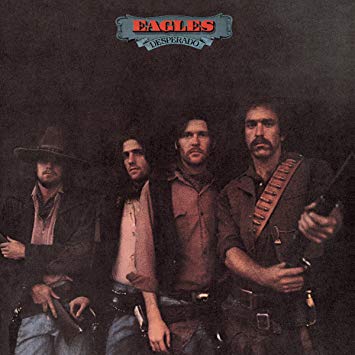 The Eagles, like many great groups of their time that go on and on, went through a hiatus, beginning in 1980.  The group reunited for Hell Freezes Over in 1994.  I totally remember that album, and seeing their videos on the music channels, that was truly reaching out to a whole new generation – the kids whose parents listened, and played their stuff in the car.  I’m one of those kids – I grew up on a steady rotation of Eagles, Doobie Brothers, Chicago, Hall and Oates, Kenny Loggins, and Billy Joel music to last me a lifetime.

If you ever wanted to know why music was so important to me, it is because it was how I bonded with my parents.  It’s the reason I go to concerts for these groups – I don’t want to miss out.  Life is way too short, and most of my favorite groups have an average age of 70-plus (something about singers born in 1945-1948, I guess), so gotta get their shows in while I can!

Glenn Frey’s  (he was the subject of Music Monday on February 26, 2018) passing on January 18, 2016 (part of the reason I chose this song was as a tribute to him) pretty much put the Eagles in a position where they didn’t want to tour anymore, but as of 2017, they still do.  I hope to check them off my bucket list one of these days.  Hey, if I saw Kenny Loggins, then anything is possible!

Don Henley, who provided lead vocals on “Desperado,” performs this song live (I have an mp3 of the live version on my laptop) solo as well as with the Eagles.  It is their “signature song,” and rightly so – it is amazing, beautiful, and heartbreaking all at the same time.

Of course, for those of us who watched Seinfeld, it will always be the song Elaine’s boyfriend stopped the world for.

Of course, Elaine’s response to “his song” by having another Eagles song as “her song” (1972’s “Witchy Woman,” from their album Eagles) is proof that everyone has a song they like by the group.

This is one of my favorites of theirs.

Thanks, Glenn Frey for helping Don Henley finish it, and looking ultra badass on the album cover.  You’re still missed.

Have a great Music Monday, and enjoy the music!