Myth: In 1981, Gavin MacLeod (Captain Stubbing of The Love Boat, Murray Slaughter of The Mary Tyler Moore Show) had his own cologne, made by Hormel. 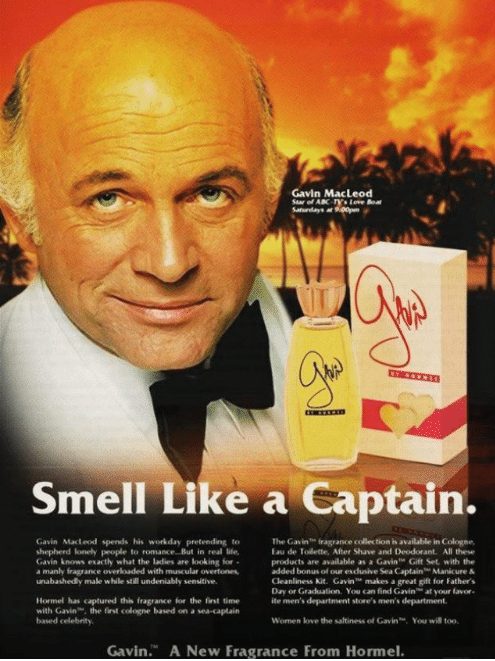 Fact: He did not.

One of the things I love about these print advertisements that occasionally go viral is that you can’t tell if it is real or not.  While chocolate-covered mashed potatoes didn’t seem plausible, Mickey Rooney owning a potato restaurant did.  Those turned out to be fake (no surprise on the former, but the latter seemed way too real).  This pops up in my memories once a year (thanks to sharing it from Retroist’s Facebook page), and it was only recently that I got to thinking about if this was real or not.  It didn’t seem unlikely, but since these fake ads are awesomely realistic-looking (I say they’re awesome because I could never pull off something so freakin’ real, graphics wise), but I checked anyway.

But with copy like this, it is pure brilliance:

“Hormel has captured this fragrance for the first time with Gavin™, the first cologne based on a sea-captain based celebrity… The Gavin™ fragrance collection is available in Cologne, Eau de Toilette, After Shave and Deodorant. All these products are available as a Gavin™ Gift Set, with the added bonus of our exclusive Sea Captain™ Manicure & Cleanliness Kit.”

The real tip off is Hormel, they of the meat variety.  If Hormel ever puts out a fragrance, you’d probably think it was SPAM-scented, and not the scent of the sea.  There’s also the head scratching copy “available at your favorite men’s department store’s men’s department.”  All a pretty big tip off.

MeTV actually fact-checked this advertisement with Hormel in July 2017 (Article – Fact check: Did Gavin MacLeod really have a fragrance made by Hormel in 1981?), who confirmed that while they have interesting things in their archives, Gavin™ was not one of them.

And besides, I think Murray Slaughter would have been proud.