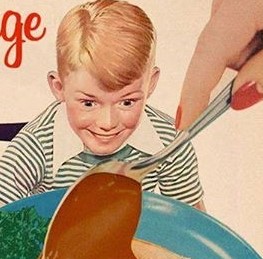 Did you ever wonder what could possibly make dull, boring, common food delicious?

How about, dull, boring, common food that your kids will actually eat?

Kraft thought of such a plan!

I like potatoes, especially sweet potatoes.  Mashed, fries, chips, and even a baked potato once in a while are fine by me.  I like my mashed with gravy, my fries with ketchup, mustard (yes, mustard!), and even Chipotle Mayonnaise (a wonderful Red Robin creation), and my baked potato with butter or sour cream.  I’m not a picky eater by any means.  In fact, I’m the opposite – I’ll try any food once.

And then I saw Kraft Potato Fudge.

Look at this stuff, people.

This is the glorified hopes and dreams of today’s kids, whose grandparents (because we didn’t even have this!) know all about the glory of a baked potato covered in fudge.

Glorious is the copy on the ad:

“…the natural goodness of nature’s potato, the Potato.”

So there’s potato, and the Potato.

Someone who wasn’t five years old wrote this, folks.

And what’s with this kid?

This is a face that has seen far too much sugar (possibly from Potato Fudge) in that given day. 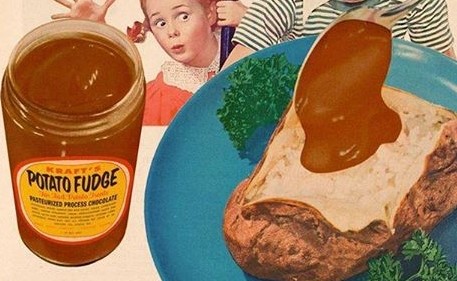 And his sister is all “let me in on this fudgy, sugary, potatoey goodness.”

As I pointed out on the original Facebook posting yesterday (props to Gary from Retroist for sharing this), this “food” stuff is glorified Nutella for potatoes (or as Gary called it, Spudtella!).  It is yet another example of a time gone by when it was fine to sugar up the kids and send them on their way.  The justification? “They’re getting a nice, healthy potato (nature’s potato, the Potato), so I’ll give them something that will ensure they get those crazy nutrients!  It is foolproof!

Forget the 1970s being a hell of a drug.  The 1950s were the time of unbeatable and incomprehensible food stuff!