It’s Monday, and we’re feeling good despite it.

Probably because it is a pay week, or maybe because the Giants won yesterday, but this Monday could be worse.

By 5 pm, I should have a totally different opinion.  But let’s savor the moment.

Instrumental pieces are not new nor novel to Music Monday (as made possible by Music Monday past choices David Foster – twice – and Kenny G earlier this month).  They’re also the kind of songs filed under “Songs I Was Allegedly Too Cool to Admit To Liking When I Was a Kid.”  That’s a ridiculously long file name, but that’s what it is called.  I also don’t have a physical file of this; rather, it is a mental file of things I used to say when I was fifteen years old in a misguided attempt to justify my (non-existent) coolness.

Consider today’s song to be in that file.

When I was a kid, my mom used to play the radio every morning before school.  No TV in the morning, because we would dilly dally trying to eat breakfast or get ready for school in the morning.  No morning news or anything, just music.  And the station of choice was the local lite rock station (Lite Rock 96.9, WFPG-FM, Atlantic City, NJ) that I still listen to on the way to work to this very day.  The format at the time was 70s, 80s, and today (“today” being the 90s at that time), and still holds true to that, with the station describing themselves as playing lite rock hits of the 70s, 80s, 90s, and today (“today” encompassing the 2000s and 2010s).

It was the station where I first heard Chicago sing about being the inspiration (and that it was hard to say they were sorry), Kenny Loggins taking us to the danger zone (and everywhere else his movie soundtrack and lite rock standards took us), and pretty much every other song it was cool for parents to listen to.  They have afternoon trivia contests for the ride home, impossible trivia in the mornings during drive time, and the workplace of the day.

My office has won it several times!

Today’s song was one I first heard on this station in the early 90s, while eating breakfast in the morning before school.  It was one my brother and I laughed about, but it was soooo damn catchy.  It was instrumental, it involved lots of Flugelhorn (so much Flugelhorn), and it is so 70s, and yet…so easy listening.

Years later, I came to find out the song was called “Feels So Good,” and it was a composition by a Flugelhorn player named Chuck Mangione.

“Feels So Good” is a 1977 composition by Flugelhorn player Chuck Mangione, from the album of the same name. 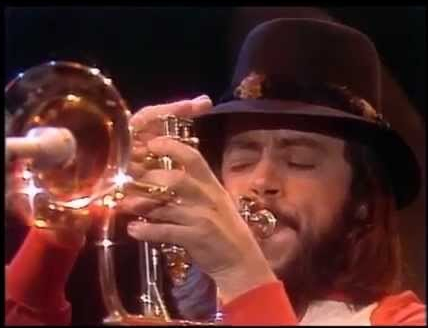 When originally recorded for the album, the song topped out at nine minutes and forty-three seconds.  It was edited down to three minutes and twenty-eight seconds for radio release (described by Mangione as “major surgery”).  The recording was nominated for Record of the Year at the Grammys in 1979, but lost to Billy Joel’s “Just the Way You Are.”

Man, Record of the Year must have been such a mellow thing in the 1970s.

As for the song, it has that Muzak, Elevator, Hear It Once and You’ll Hear it All Day kind of feeling.  It’s not a terrible feeling, to be completely honest.  The song has a nice catchy beat, and certainly lives up to its title…it makes you feel so good!

And if you’re feeling particularly adventurous, perhaps the nearly 10 minute version is your thing?

As for Mangione, he is still in the business, and released his last album in 2000, and has acted in a few roles, including a recurring role on the primetime cartoon King of the Hill, playing himself.

Either way you like this song, may it live up to its title, and your Monday…not be so Monday-ish.

Easier said that done.  It’s still Monday.  We can only hope for so much.