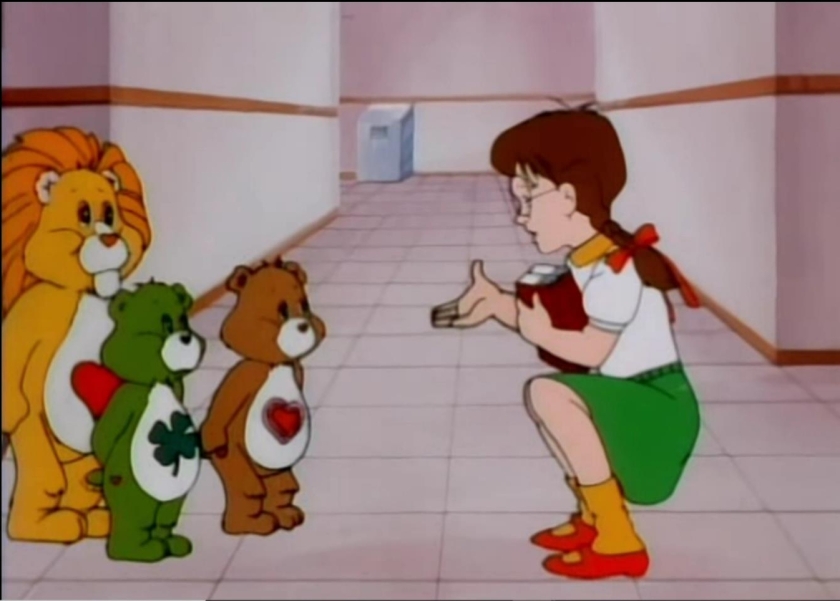 Just stick around. I promise, I’ll try to answer this confusion!

What happens when bad luck follows you everywhere, with no end in sight? Well, in the case of today’s Retro Watch, anthropomorphic bears with symbols on their stomachs pay you a visit to lend advice and give you gifts. Doesn’t that always happen?

It’s never happened to you?

“The Lucky Charm” is the first part of episode three of DiC Entertainment’s Care Bears series, originally airing on September 28, 1985. The series itself ran for eleven episodes (21 mini-episodes total) between September 14, 1985 and November 23, 1985. The episode is part of the VHS series, on the video To The Rescue!, released in 1986 by Karl-Lorimar Home Video, one of several to be released to both videocassette and Betamax!

The DiC series follows the first feature film, The Care Bears Movie, and the two Atkinson Film-Arts specials from 1983 and 1984, respectively.

Following the second film in 1986, the series went to Nelvana and became The Care Bears Family (the one with the catchy theme song!), airing on Saturday mornings for three seasons between 1986 and 1988, as well as in syndication. During that time, two more movies were made – The Care Bears in Wonderland, and The Care Bears Nutcracker Suite, which aired in three parts during November 1988, and in its entirety in December 1988, concluding that series after thirty episodes.

The DiC series has the style and feeling of their programming at the time – similar music, animation style, coloring, even sound effects. “The Lucky Charm” is no exception!

So, without further ado, on the day of Good Luck, we find out how that luck happens for one seemingly unlucky young lady!

Millie Jacobs has the unfortunate distinction of bad luck following her wherever she goes, and spreading to those around her. So much so, that she is called “Jinx Jacobs” by her peers. From tripping over a newspaper on the front steps at home (and doing a full backflip?), Millie’s day seems to be off to a great start.

And it gets better!

After already being late for school (again!), getting splashed by a car going through a puddle from a fire hydrant (this has happened to me not once, but twice!), Millie causes Jimmy to fall off his bicycle just by her walking past him (apparently, he’s smitten with her), and getting sent to the principal’s office for being late.

Talk about the day from absolute hell!

While on her way to the principal’s office, Millie encounters the Care Bears Family (apparently they are public knowledge, like she knows someone who has encountered them before?), who observed Millie’s misfortunes from their perch on Care-A-Lot.

Good Luck Bear has brought Millie a small gift with a big impact – a tiny locked box. In his Irish-Australian (I swear, did Good Luck Bear have an accent?), he informs Millie not to open the box until they give him permission.

Millie feels like her encounter with the hallucinations – er, Care Bears and Care Bears Cousins, – may bring her long overdue good luck, and declares it “the best day of her life!”

And so, having this good luck charm, whatever it is, proves to have a positive effect on the events following receipt of the charm. She helps Jimmy fix his bicycle, stacks play bricks without knocking them over, and manages to climb to the top of a human pyramid without taking everyone down with her.

Millie is no longer Jinx Jacobs!

The next day, as she is leaving for school, she encounters the Care Bears, and is granted permission to open the box. Inside, the lucky charm turns out to be…

Turns out, being positive and determined brings good luck, and “The best kind of luck is the kind you make yourself!”

With her new friend Jimmy, Millie makes her way to school, free of the bad luck that plagued her, and off to enjoy the good luck that lies ahead.

And that was the story of the day Millie Jacobs found out about good luck, and how to get it.

I only vaguely remember the DiC series (I was barely three years old when it aired), and mostly remember The Care Bears Family, if mostly for the great theme song. I also found the animation quality on the series to be more in line with the feature films, as they were all animated by Nelvana. DiC’s animation is not bad, don’t get me wrong, but when I think Care Bears, I’m not usually reminded of the Inspector Gadget-esque sound effects, and the sort of dull print of the series. The Nelvana series, by comparison, seems so much more colorful and cheerful (the theme song!). Of course, if you’ve read my previous article on Atkinson Film-Arts, you know how I feel about the animation quality. Nothing against the company at all – I loved their adaptation of The Velveteen Rabbit, as well as For Better or For Worse: The Bestest Present.

The voicework of the DiC series is the same as the Nelvana series, that part is consistent, but the stories that I’ve seen just seem, I don’t know, cheesier by comparison. And didn’t Good Luck Bear sound more Australian than Irish in this series? I don’t remember Good Luck Bear ever having any kind of accent!

But, for what it is worth, the moral of the story (and the other ones in the series), are the most important part (it passed for Educational/Informative standards in the 1980s), and this episode teaches a great lesson, taken directly from the dialogue:

“The best kind of luck is the kind you make yourself!”

This is the absolute truth. I’ve said something similar about happiness – you have to create your own. No matter how hard attaining luck or happiness seem to be, no one is ever truly unlucky, a jinx, or unhappy forever. Easier said than done, but as far as happiness goes, it took me a long time to head my own ambitious advice to my grandmother many years ago.

And Millie found out that “Jinx Jacobs” is merely a stupid nickname and a short low point in her young life.

Exactly how the relationship that became my marriage started – a low point followed by a high point, followed by new love. And with a guy named James, no less.

May luck always be on your side, even if a Care Bear isn’t.

Happy St. Patrick’s Day, and have a great day!