On Music Monday, what the people need is a way to make them smile.  It ain’t so hard to do if you know how.

There has been a beautiful trend during these very difficult and not-so-beautiful times, where artists are coming together (albeit separately) to bring us the beautiful music they are known for, with the purpose of boosting our morale and spirit.

From Disney specials of songs from their films, to trumpet players gathering all over the world, to bands writing songs about the current state of the world, and artists holding livestream concerts alone in a theater, the music community has worked hard to help us all feel a little better, when the rest of the world tries to do the opposite.

Back in 1972, The Doobie Brothers were struggling for a hit.  Their first album, a self-titled effort in 1971, failed to chart.  The world of music had changed so much in the short time The Doobie Brothers had been together, and Tom Johnston wanted to write a song that called for world peace, a lofty dream, if you will.

As he said regarding the song:

“The chord structure of it made me think of something positive, so the lyrics that came out of that were based on this utopian idea that if the leaders of the world got together on some grassy hill somewhere and either smoked enough dope or just sat down and just listened to the music and forgot about all this other bullshit, the world would be a much better place. It was very utopian and very unrealistic (laughs). It seemed like a good idea at the time.” (Source: “Doobie Brothers’ Tom Johnston Reflects on ‘Listen to the Music’ at 40” – Ultimate Classic Rock, 11/29/2012)

That “good idea” became the group’s first hit, their encore song, a staple of Adult Contemporary radio, and part of their effort toward helping the world forget the craziness of the times, even if for just a few minutes.

“Listen to the Music” is a 1972 single by The Doobie Brothers, released as part of their second album, Toulouse Street.  It was their first successful single on what would become a commercially successful album with a few great singles (“Jesus is Just Alright,” as well as signature song “Rockin’ Down the Highway”), and the beginning of things to come for the group.  The song peaked on the Billboard Hot 100 in November 1972 at #11.  The album itself reached #21 on the Pop Albums chart.

The message itself is simple – forget everything and simply “listen to the music.”  If only it were that simple, right?

This song, as well as “Black Water,” were performed in isolation by The Doobie Brothers, and I must say, even when not together, their sound definitely is.

This version was done as a tribute to Feeding America, and features a more prominent use of banjo, but no lead electric guitar or drums.

But of course, if you prefer to “listen to the music” of the original version, then by all means…

Who else could make posing in a former brothel look good on an album cover? 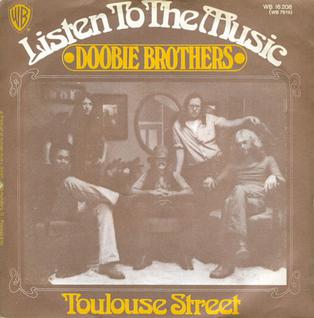 The featured image was actually from the concert I went to in November 2018, during the encore when they sang “Listen to the Music.”  I was bummed because I knew this was the encore, and it just screamed “last song, we mean it!,” but it is hard to be sad listening to it.  This song has always made me feel good, and in times like this, gives me hope that concerts aren’t a far off reality.

The real shame is The Doobies were supposed to be on their 50th anniversary tour this year with Michael McDonald (ooooh, to be at that show).  Hope of all hope, they will be able to go on at least part of this tour in 2020.

Like a lazy flowing river, surrounding castles in the sky, have a Great Monday, and enjoy (and listen to) the music!