May 12, 2020 Allison L. Venezio-Preston Do You Remember?, Nostalgia, Television and Movies 2 comments

That’s only partially the actual title.

As I alluded to last week, Malcolm-Jamal Warner would return to teach kids another set of 1980s Kid Survival Skills.  From teaching kids how to be cool at parties to today’s video, 1986-1987 was a time period for Malcolm-Jamal Warner to teach kids about the important of kiddie survival on several different levels.  But at the end of the day, it is still another kiddie video on a kiddie home video label.

So, what is Malcolm (and a group of friends who aren’t grown-ass comedians) aiming to teach us about today?

Today’s instructional aide shifts to a more important and serious lesson: that of staying safe when you’re home alone.

Capitalizing on a Growing Trend 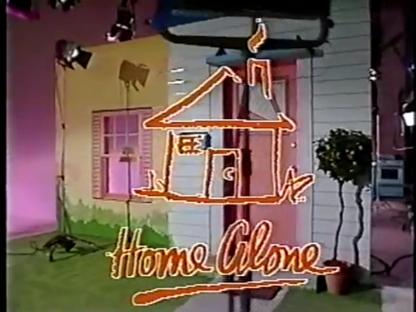 Well, actually, it’s called Home Alone: A Kid’s Guide To Playing it Safe When You’re On Your Own.  This 1986 instructional aide featured Malcolm- Jamal Warner and four child actors (Alyson Court, Sunny Besen Thrasher, Wendy Chong, and Ian Heath, who goes by “Mike” in this video), as they guide you through the do’s and don’ts of being safe when you’re by yourself.

According to the September 1986 issue of The Atlantic:

Drastic shifts in sex roles seem to be sweeping through America. From 1890 to 1985 the participation in the work force of women between the ages of twenty-five and forty-four soared from 15 to 71 percent, with the pace of change tripling after 1950. At the end of the Second World War only 10 percent of married women with children under the age of six held jobs or were seeking them. Since then mothers of preschool children have thronged the job market: by 1985 the census had classified more than half of these young mothers as participants in the work force.

And knowing that, there was obviously an increase in younger children in daycare, and slightly older school-aged children coming home to an empty house.  So a video about this topic at the height of this shift seemed practical enough.  Even smarter, the video brings the topic to the level of a kid, as told by kids.  Granted, they’re child actors, but they could be relatable enough.

How To “Home Alone”

The video itself clocks in at twenty-eight minutes, and describes different tips for staying safe, as well as scenarios where these tips would be necessary.

From wearing your giant key around your neck, instead of tucking a reasonably-sized key in your pocket that clearly has a hole in it, to having an emergency plan, emergency contact list, and things you should – and shouldn’t do – when you’re alone, this program plays out scenarios in skit form, aiming to teach a generation of kids how to “home alone” successfully.

That’s my words, not theirs. 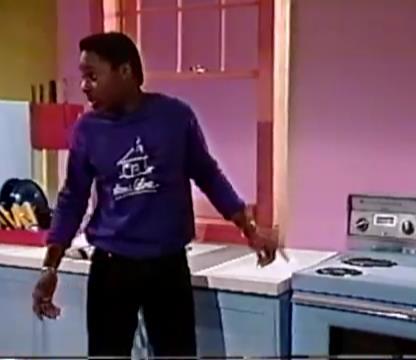 There’s Malcolm-Jamal Warner dressing like the most unconvincing burglar (among other goofy disguises), chore lists and the things we’re convinced these child actors don’t do when they get home from school, preparing snacks safely, strangers at the door, strangers on the phone, plumbing failures, smelling gas, power outages, injuries in the home, contact lists, and fires. 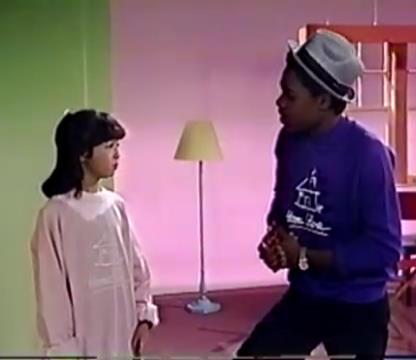 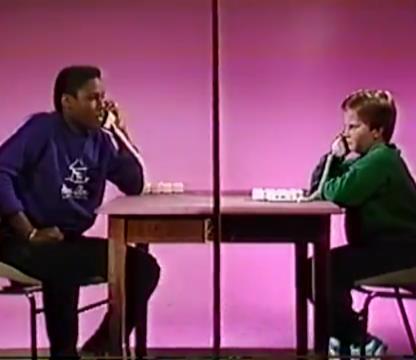 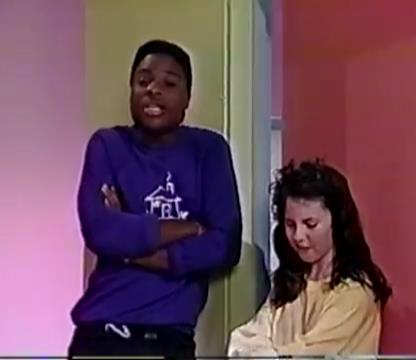 All of this leads up to the moment where practice is put into…The Home Alone Plan!

Cliff and Clair Huxtable have got nothing on Mike and Wendy!

There’s 1980s game show-style music, cheesy costumes, cheesy acting, and Malcolm-Jamal Warner trying to break into a prop house.  It is pretty hokey, but it is informative at the same time, and that’s what these “instructional” videos aimed to be – informative while entertaining.

It’s this or thumb wrestling and fake stairs, friends.  You really don’t want that again, do you?

Oh, and I wasn’t kidding about the giant keys.

Yes, keys.  I forgot about the other one he demonstrates in his pocket.

Of course, there’s the giant sandwich. 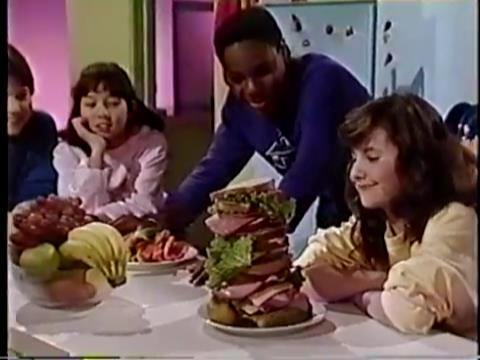 Max from My Pet Monster would love that sandwich!

The kids in the film were Canadian child actors at the time.  The film itself was made in association with Nelvana, Limited.  Alyson Court and Sunny Besen Thrasher were prominent voice actors, and around this time, both of them starred in the live action My Pet Monster (that’s twice in a matter of sentences!) as siblings, with Thrasher playing the chronically hungry Max. Alyson (who spells her name wrong) was a prominent voice (and live action) actress before this video, and she’s still actively working today. Sunny was on The Edison Twins, was a child voice actor, something he did until the mid-1990s.  These days, he’s a producer and director.

Ian Heath (who played “Mike”) was on Anne of Avonlea around this time, and later did some voice work in Nelvana’s Babar cartoon, as well as other shows and movies (he’s still acting, and not going by a fake name).  Wendy Chong appeared on Today’s Special, The Elephant Show (OMG, remember that one?), and My Secret Identity (which starred a young Jerry O’Connell.

The video was made in Toronto, Ontario, Canada in 1987, but according to Internet Movie Database, it wasn’t released until May 1990.  Even the dating on the VHS cover says 1987, so…maybe a reprint was issued?

The video itself came with a letter (based on this image I saw on Amazon) from Malcolm’s mother, Pam.

I wonder if he worked on the “string trick” while home alone.

Hey, we can combine the efforts of both videos, right?

Did Allison Ever “Home Alone”?

Once in a while.

I started having my chance to be alone when I was about nine years old, usually in short spurts of time, always during the day until I was about twelve years old.  My dad worked from home, and usually handled any of his sales calls in the morning when my brother and I were at school, so by late morning or early afternoon, he’d be home. My mom was a stay-at-home mom until I was nine years old, and even when she did work after that, it was very part time – when I say “very,” she worked maybe two or three days a week.

The longest I spent alone as a youngster was the summer between third and fourth grade when both my mom and dad had to work, and it took my dad out of the house for the day.  It probably was, at the most, five hours, but it was a big deal for a nine-year-old.  My parents got us sandwiches from Wawa (surely you’ve heard of it) and put them in the fridge.  We stayed put in the living room all day with Legos and the TV on.  No phone to answer (we had an answering machine), no answering the door, and I’m betting a trusted neighbor knew we were there, just in case.

If my parents had something at night, or all day, we would go to our maternal grandparents house.  We would stay overnight there, or a few times, or if it wasn’t late when whatever my parents went to was over, and it was close by, we’d just go home that night or later in the day.  By the time I was eleven or twelve, I could be alone early in the evening for a few hours, and by the time I was a teenager, we could be alone at night.  My brother and I were really good about staying safe – we usually watched movies or played video games until they got home (when we were younger), or hung out in our rooms (when we were older). My parents never went away overnight, and we never – NEVER! – told grandma if we were alone at night.

Pretty sure my mom used to tell her we were going to a friend’s house until they came home.

My grandma used to freak out when my brother and I were older, and I remember this one time when I was eighteen, my parents went to a Christmas party for my dad’s work.  My mom told my grandma that we were going to be there alone (we had school the next day), and she freaked out.  You know, eighteen, senior in high school, and Grandma felt we needed supervision.  I’m glad she never found out about all the times we were alone at a younger age!

I hadn’t seen this video before two years ago, when I wrote a Retroist article about it.  I actually sought it out after writing about the production company that made it, Hi-Tops Video, and saw it on a list of their videos.  I knew I needed to check this one out.  Since I like digging in the doldrums of nostalgia, I knew it would be perfect.

Oh, it didn’t disappoint.  I wrote the Show Off! article around the same time, which is why I figured I would do both of these back-to-back, not because it featured the same host, but because the theme of 80s Kid Survival was a common thread, albeit a totally different type of survival.

Watch Home Alone: A Kid’s Guide To Playing it Safe When You’re On Your Own

It actually is a fast 28 minutes, and worth the time, especially if you need a good giggle.

While still cheesy in its own right (mostly because of the game show-style music, the set, the acting, so on and so on), the video itself does cover important points in how kids can stay safe when they’re on their own.  It features kids explaining the plan (Malcolm himself was about 16-17 years old at the time), so it was, at least in the 80s and 90s, relatable.

I’m not wrapping up with the Home Alone Plan, but I will leave you with these words of wisdom:

Yes, make sure everyone knows you’re a well-off child actor who wears giant construction paper keys around his neck…and tied to his belt loop.