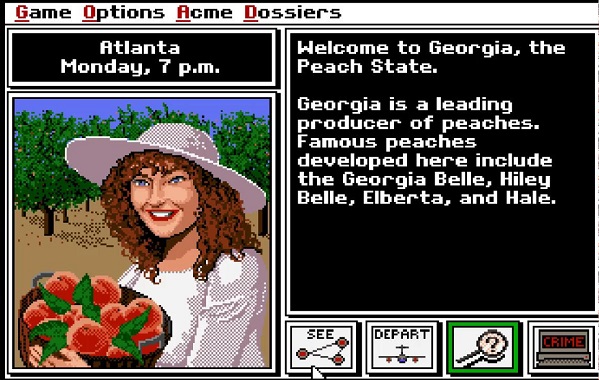 By now, you better know who I’m looking for.

Yesterday, I wrapped up favorite video game month with some gameplay of the 1990 Enhanced Edition of Where In The World is Carmen Sandiego?, itself a follow up to my September 25, 2019 gameplay of the 1985 version.

Carmen not only traipsed around the world with her network of baddies (V.I.L.E. Henchmen – and women!), but she also traipsed through time, space, American history, Europe, and the United States in the present day.  She’s still traipsing around the world and beyond today, but Classic Reload has her Broderbund-created adventures from 1985 until 1997.

As a bonus to yesterday’s article and accompanying gameplay video, I also played the USA version of the game (from 1992) during my round of gameplay.  The footage was recorded on Monday, April 27, 2020, and I thought this would be a nice bonus to wrap up the month’s theme.