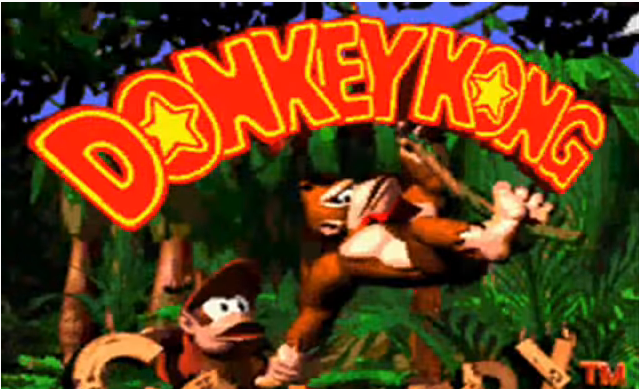 Favorite video game month continues on, with a game that has the distinction of not only kicking off a series, but also being a sequel of sorts to another.

Favorite video game month kicked off with Nintendo’s All Stars battling their way (and each other) to victory against a giant disembodied hand in a sequel that set the standard for future games in the series.  Last week, we met a cute pink balloon of a creature that was not meant to be a star of his own video game franchise, but instead, a placeholder.

Today, we dive into the jungle, and the antics of a banana-eating, fun-loving gorilla, who with his nephew, set out to recover their stolen bananas.

The game not only kicked off a series of games that continue into today (much like the other All-Stars of the same caliber), but also pays homage to that All Star’s family and series of games.

The Kingdom of Kong

Donkey Kong Country is a game released for the Super Nintendo Entertainment System by Nintendo and British video game developer Rare.  It is part of the Donkey Kong franchise.  This part of the franchise finds the redesigned Donkey Kong Jr. in his own series, as the grown up version of Jr. from the 1982 arcade game.

In this game, he is given the task of partnering up with his nephew Diddy (a new character) to reclaim the stolen bananas from King R. Kool and his Kremlings.  DK must find his nephew, who has been sealed in a barrel, and charge their way through a variety of levels in the kingdom, which happen under the sea, in the jungle, caves, and mines.

It also had this funny introduction:

Upon its release in November 1994, Donkey Kong Country was a hit, selling six million copies within the first month, and reached 9 million units shortly after that, making it the second best-selling Super Nintendo game of all time.  In the retrospective sense, the game continues to still fare well with critics.  It plays well, and provides a nice challenge.

There’s two direct sequels to this game on the Super Nintendo – Donkey Kong Country 2: Diddy’s Kong Quest (released in 1995), and Donkey Kong Country 3: Dixie Kong’s Double Trouble.   The canon of the series would pick up in 2010 on the Nintendo Wii, and the original game would see re-releases ported to the Game Boy Color in 2000 and Game Boy Advance in 2003, as well as the Wii Virtual Console in 2007 (it was removed from the store in 2012), as well as the Wii U Virtual Console, and is pre-installed on the SNES Classic Edition.

The pre-rendered 3D graphics were unlike anything Super Nintendo had demonstrated in previous games, with gaming music combining natural environmental sounds with percussive accompaniments.  For a 16-bit console game, it was pretty innovative, and helped keep the Super Nintendo alive as the next generation of consoles were on the horizon.  The graphics are nothing compared to today’s games, but in the mid 1990s, they were beautiful.

Rare’s redesign of Donkey Kong has been kept throughout the series of games, with obvious graphical adjustments as the technology has improved.

Did Allison Play Donkey Kong Country In Its Original Release?

Yes, yes I did!  And I can even do one better: my Super Nintendo bundle came with the game!

In 1995, Donkey Kong Country included with the Super Nintendo Entertainment System set.  I purchased this set at Toys R Us a few days after Christmas in 1995, with babysitting and Christmas money (and a little help from mom to cover the tax, since I had just enough for the system).  I had a choice between this set and the Super Mario World / Super Mario All-Stars set (which was the one my friend got for her birthday that year), but I had played Donkey Kong Country with the boys I babysat for, and I loved the game immediately.

The choice was simple.

Of course, I’ve played Super Mario World many times over the years while babysitting, spending time at my friend’s house (or she bought it to my house), renting it at the video store, and having it for my Game Boy Advance.  I never felt like I missed out on that game.

I kept my system, and the box it came in (along with all of my SNES games), for over ten years until I moved in 2006.  I think I remember my dad saying he gave it to one of the moving guys (he was a pain in the butt), because I was never able to find it after we had moved.  I remember the one mover driving me nuts over having an SNES in the box – wouldn’t leave me alone about that, or any of the other things I owned.  I should have just hidden it until we left the house, I’d be happy to still have it today.

Don’t weep for me though – my husband and I have two emulators (including a Raspberry Pi), and I can play this game whenever I want.

Yes, you read that right.

Now I’m convinced it was my system (it definitely wasn’t, but I’m bitter), but it also has Killer Instinct with it, and I HATED that game.  My brother and I rented it the week after I got my console, and we took that game back the next day.  Five days with that awful game was not happening – we got Super Mario Kart instead, and we all know that one is a classic.

Given the accessibility of emulators, and the SNES Classic System, I wouldn’t even bother trying to get a used SNES.  You’re talking to the most nostalgic person out there (ok, one of them), and I wouldn’t even want to buy an original SNES.  I contemplated at one point getting the classic, but the Switch has apps for the SNES and NES (this game, nor its two sequels, aren’t on that app yet, but I’m sure that will happen at some point).

I have yet to beat this game (I got to about 80% complete by 2006), and based on the gameplay I did prior to writing this, I’m not sure how I ever got that far.  Maybe my brother played some of it, I have no clue.

As for the sequels, I got both of them within a year of getting my SNES.  I bought Diddy’s Kong Quest  in the spring of 1996 at Toys R Us with my babysitting money, less than six months after I got my SNES (I didn’t need help with the tax this time), and I got Dixie Kong’s Double Trouble! for Christmas in 1996, same Christmas I got Toy Story and Ultimate Mortal Kombat 3 (ok, that was my brother’s game).

My husband got me Tropical Freeze for the Switch for my birthday in 2018, and I love it, but I have yet to beat it.  I successfully beat Super Mario Odyssey (spent more than a few late Friday nights and Saturdays playing that game), as well as Kirby Star Allies, but I need to try to beat this one.  Once I manage that, I will have successfully beaten a Donkey Kong game.

Donkey Kong Country (and its sequels) got the nostalgic treatment by YouTube user Nick930, who covers the entire franchise between 1994 and 2020.

Donkey Kong Country was introduced in a commercial in 1994, which triggered plenty of memories.

There was also a promotional VHS for the game, offered for free to Nintendo Power subscribers in 1994.  That in itself is an article…for Pop Culture Retrorama!  I’ll be following up this article over on that site with the promotional video!

Did you play Donkey Kong Country, or any of its sequels, either in their original releases, on emulators, or on the SNES Classic console?  I’d love to hear your stories and experiences of playing the game, how you felt about it, what you think of it today, so on and so forth.  Do the graphics hold up?  Does the music sound great?  Does Coral Capers look as beautiful as it ever did?

And – AND – did you ever beat this game, or any of the SNES games in the franchise?

Next week, we wrap up favorite video game month with a shift away from Nintendo, and to something I loved on the computer.  I have played the SNES version, but it is similar to the computer game.

No, it isn’t Oregon Trail.