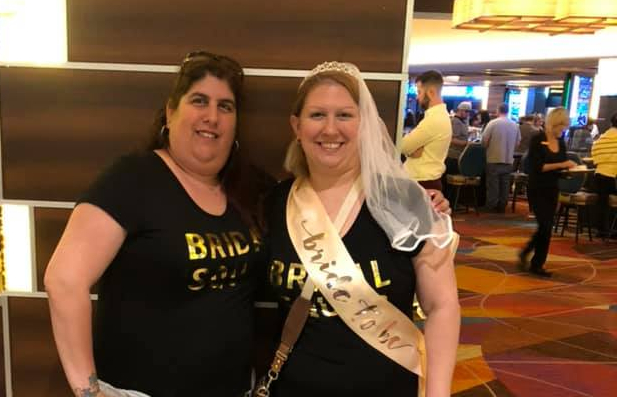 And when we both get older, with walking canes and hair of gray.  Have no fear even though it’s hard to hear, I will stand here close and say…

I love tributes when they’re of the good kind – appreciation for one’s efforts, gifts, or their mere existence.  I was actually saving this song for June, when it would be appropriate for friendship week.  However, I had to bump up its use a few months early, and not for the reason I wanted.

Six days ago, on Tuesday, April 14th, my best friend, “Sister from Another Mister,” and the sweetest, kindest, most compassionate person in the world, Amie, passed away unexpectedly.  We feared the worst, given the current circumstances, even though she showed none of those symptoms.  In reality, she suffered cardiac arrest, and a ruptured ulcer in her stomach.

Amie was 42 years old, a life taken way too soon, from people who loved her way too much.  She was a special soul, and now, she’s an everwatching angel.

Amie never complained. She just loved life and radiated positivity.  She was taking medication for a benign pituitary tumor.  It made her feel sick – it was chemotherapy medication, after all – but she never complained.  Ask her how she was doing, how she was feeling, and she always told you she was good.  Now, don’t get me wrong, she was honest when she had walking pneumonia – she told me she was raspy and tired, but then she said, “but I’m good otherwise.”

Amie was the epitome of the qualities we should all look for in friendship – a non-toxic, positive relationship that brings on smiles when you think about them.

I’m writing this with a combination of smiles and tears.

I’m concurrently writing this with a tribute I’m working on, but I’ll talk much more about her soon enough.  I planned a special song tribute to her, after all!

A television show about four friends (well, three friends, and one of their mothers) meeting in their golden years, housemates in the retirement capital of the world, Miami, Florida, and their journey through those years, dating, dealing with age-related issues, eating alot of cheesecake had a theme song that perfectly described everything friendship of any age should be.  In all the years I’ve watched The Golden Girls, I had no idea that this wasn’t just some carefully concocted theme song, but an actual song by a singer who brought it to moderate success less than ten years before it became the theme song of long-lasting friendship.  I found out much later, but I’m glad I did find out.  Otherwise, I would have missed out on a great original version.

“Thank You For Being A Friend” is a single by Andrew Gold, from his third album, All This and Heaven Too. Released in 1978, seven years before it became a popular theme song, Gold considered the song a “throwaway thing” that took him an hour to pen.

I’m wondering if he ever realized he wrote the theme song for friendship.

I’m aware Kenny Loggins wrote “Forever” with David Foster in slightly less time, and despite that song’s moderate success in its release, it has become how Kenny Loggins closes out every concert.  That song was more of a hit than chart position ever indicated, but I’ve never heard that song referred to as a throwaway.

Anyway, this song.  for a throwaway, it is catchy and sweet.

“Thank You For Being A Friend” reached #25 (#15 on the Billboard Hot Adult Contemporary Tracks) on the Billboard Hot 100.  It was re-recorded in 1985 by singer Cynthia Fee for The Golden Girls, but has also seen life in other places – television shows, the end of two World Series games (Game 5 in 1988, and Game 4 in 1990), and was additionally covered by Dionne Warwick and Elaine Page in 2010.

But of course, this is the version everyone knows.

Gold’s song is about friendship through the years – youth, age, and even in death. It tells of what friends will do for each other – help with cars, give a party, and the admiration that friends should have for each other.  Stand up and take a bow?  Of course!

In terms of my Golden Girls life, I’d always likened Amie to Rose Nylund (Betty White’s character) – sweet and with a heart of gold.  Unlike Rose, she was not ditzy (she was very smart), nor did she tell St. Olaf stories.  Lots of other stories about her life,  yes, but nothing about St. Olaf.  She was the Rose to my Dorothy – cynical and unlucky in love, until, like Dorothy, I met the love of my life.  I’m still cynical and cranky, just luckier in love.

Honestly, doing this at my wedding would have been HILARIOUS! 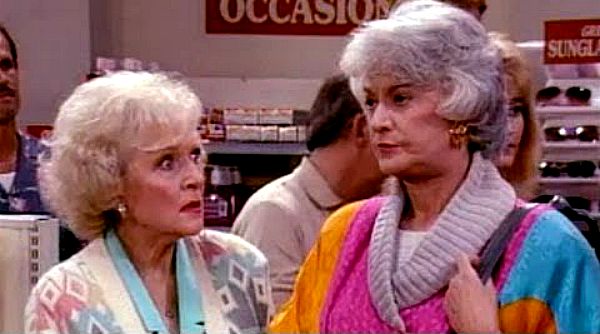 Gold passed away in 2011, at the age of 59.  He admitted later in life that his song “Lonely Boy” was not autobiographical (certain details of his life, like his birth year, were used “conveniently”), and that he’d had a happy childhood.  I also hope that his opinion on his “throwaway song” has changed over the years, as it has become an important part of popular culture.

“Thank You For Being A Friend” is a catchy tune, one that you can sing along with – preferably off-key, loud, and cheerfully.

Ironically enough, this video came up in my Facebook feed the day after Amie passed away.  It made me laugh, and reminded me about the singing off-key part, though this guy has a great voice!

The song is a reminder that the best friendships can endure everything, and even transcend death.  I know ours will.

Amie, I love you, and I will miss you forever.  As the song says, thank you for being a friend.”

Have a great Monday, and enjoy the music.