We’re one day closer to Mother’s Day, and that means one more crazy mother movie trailer!

Yesterday, hell hath no fury like a Joan Crawford scorned.  Beneath her overly made-up visage was a wire hanger-beating, alcohol-fueled angry lady.  Her daughter wrote all about it in a 1977 memoir, which promptly became a 1981 film that, despite being hugely successful, is considered a cult classic.

Today’s film has received the same prestige, but not the same kind of box office success.  And while the movie tried to pass itself off as a biopic (if you’ve seen it, you’d understand), it really wasn’t.

The year is 1994, the Suburban Crazy Mom is Kathleen Turner’s Beverly Sutphin, and the film…is Serial Mom!

So, if you haven’t seen this film before…

But beneath that perfectly set visage is a woman who kills anyone who merely inconveniences her…or flat out wrongs her.

Oh, and did I mention she likes Barry Manilow’s song”Daybreak”?  Because apparently this is the kind of song an unsuspecting serial killer would like.

But don’t take my word for it…check out the trailer!

Serial Mom was released on April 13, 1994, and received mixed to positive reviews.  It was a commercial failure, but has attained a cult status not unlike John Waters’ other films, with the same mainstream look that his other films from around this time had.

Kathleen Turner was one of several women considered for the role – John Waters had suggested Meryl Streep, Kathy Bates, and Glenn Close, but ultimately, the role went to Kathleen Turner.  Any one of those castings would have been interesting.  Don’t get me wrong, Turner was incredible in the role, but can you imagine of Meryl Streep or Glenn Close played Beverly?

Like Mommie Dearest, my mom absolutely hates this movie.  Of course, my dad likes it (no surprise there!).  I first saw this movie in the late 1990s on HBO – I loved the bizarre story of a suburban housewife with a killer instinct even as a teenager.  My brother actually has the original DVD print (the HBO Home Video version, which is long out of print) sitting on his DVD shelf in his house.

So two days, two crazy mothers, and the hope that your mom is not these moms! 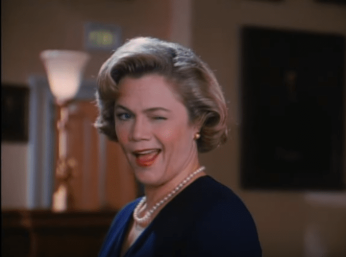 My mom definitely is not, though she does like Barry Manilow music…

That means nothing, people!

Anyway, have a fantastic Flashback Friday, a great weekend, and Happy Mother’s Day to all the moms out there!  Thanks for going the extra mile for us kids.

Just don’t go this kind of extra mile, don’t want to look crazy, do you?