It’s Music Monday, and I’m sorry to inform you of this…

Time to disown them.  They ain’t cool.

This is my mom and dad.  They’ve been married for 42 years, and this photo is from before they were married, during a New Year’s party. 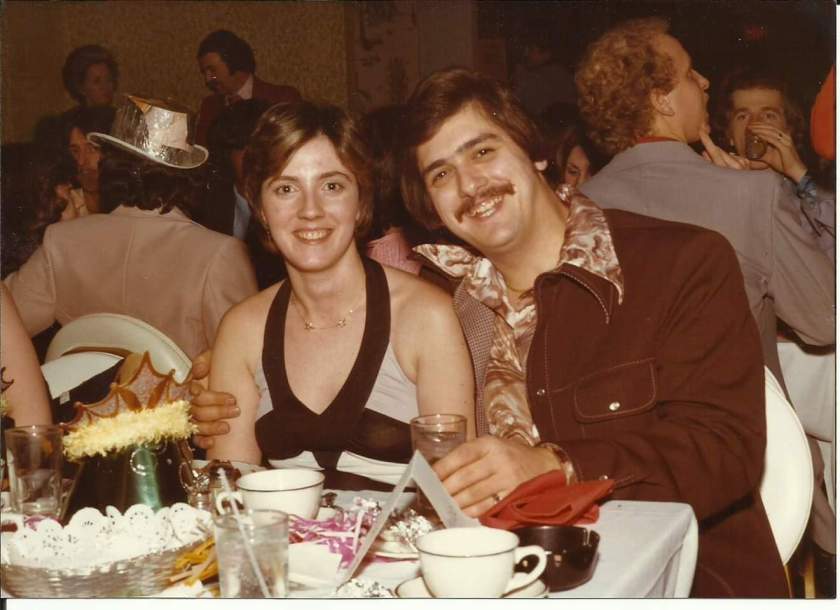 The only thing not cool about this photo is my dad’s mustache.

My parents gave me my appreciation of music from the years of riding in the front passenger seat while listening to the local lite rock station.  I also spent my formative years watching MTV and VH1 (yeah, I know), so music is definitely a huge part of my life.

I guess my parents do rock ‘n roll.

So, if you haven’t guessed by the featured photo, this is about a Kenny Loggins song.  Why, you ask?  Because we (me, fiancee, and mom) are going to see Kenny Loggins on Friday night.

Fiancee and I are seeing Chicago on Saturday night.

Yes, that’s one weekend, two concerts.  Guess what next Monday’s featured group is?

Anyway, this week, in celebration of seeing Kenny Loggins in concert again, a song he still performs in concert with as much liveliness as he did in the 1970s, despite the fact that he is in his 70s.  Like that should ever slow him down.

The song is a response to the Generation Gap between the younger, coming-of-age generation growing in the 1950s and 1960s, and their parents.  Curfews, getting arrested while in the backseat of a car at the drive-in (“Out of the car, longhair!”) – this song is all about being rebellious!

The sing was the biggest-selling single of the duo’s existence, and their only Gold single.

Of course, it is totally catchy and singable.  If you don’t believe me, you will after you hear it!

Loggins maintains this song as a concert staple, singing it during the second part of his set – if you’ve never been to a Kenny Loggins concert, he starts off with slower songs and encourages the audience to sing along, and in the second part, he does the soundtrack era, stuff from High Adventure, and a few upbeat Loggins and Messina songs.  One of the guys in his band does the perfect “Out of the car, longhair!”  It is fun to witness!

…and even Poison covered it!

Awesome cover!!  The MTV crowd probably had no concept of the Rowan and Martin’s Laugh-In reference though!

Loggins and Messina would go on to release four more studio albums, along with two live albums before quietly and amicably splitting up in 1976. While Messina, formerly of Poco and Buffalo Springfield, never quite achieved a level of success he’d had during his previous associations (he had been working at Columbia Records as an independent record producer when he met the young, little-known singer/songwriter Kenny Loggins in 1970), Loggins career took off in the coming years. The two have reunited for two tours in 2005 and 2009, but in the end of their first association, they’d become more competitive than an actual duo.

A bit of a bummer to wrap this one up with, but at least we know the duo are still friendly enough to have reunited on two occasions.

As for me, I’m looking forward to seeing Mr. Loggins doing what he does best on Friday night, along with my fiancee and my mom (it is her Christmas present from us).

My mama don’t dance, but at least she knows how to rock ‘n roll!

On that note, have a great Monday, and enjoy the music.

Seriously, don’t be a square!