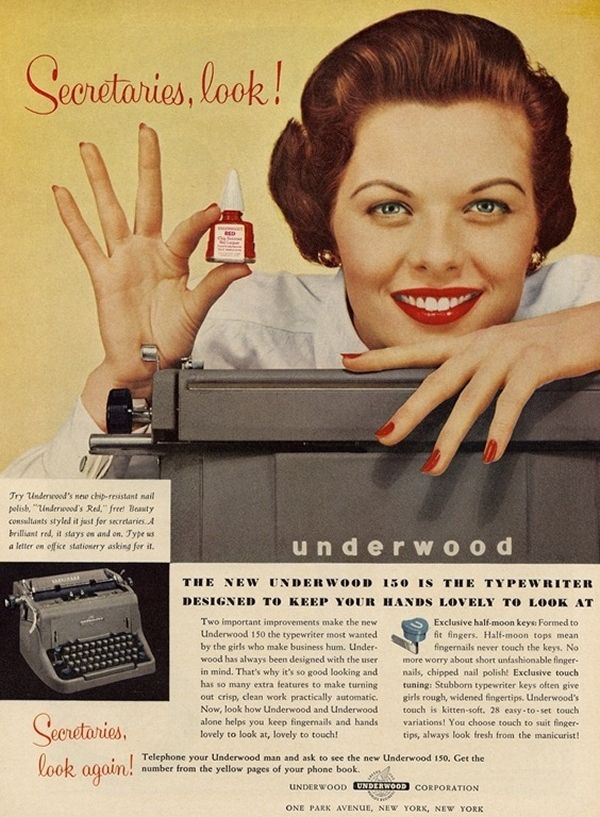 Ah, old timey print advertisements.  It was a simpler time, where a man believed killing his Secretary was acceptable, women dreamed of wearing their bra (and only their bra) to work (and were fine with it!), and typewriters were advertised as not chipping nail polish.

There’s a reason times have changed.  Undeniably, it has something to do with equal rights, and something called sexualization and sexual harrassment.

At the risk of going off on a tangent about a whole other issue, let’s revert to that simpler time, for a look at some oldies but goodies.

Because we can’t take everything seriously, right?

I’ve used this one in a previous post, but it fit the theme of Administrative Professional glory, so why not?

Dear sir, I don’t think killing a woman is legal.  Not at all.  And if the Pitney-Bowes postage meter is your reason, you may need to check your sanity.  Or just let the woman you want to kill teach you how to actually use the machine.  But, she’s also perfectly capable of doing it herself, so let her.  No homicide needed.

Before Fifty Shades of Gray, there was Pitney-Bowes and the guy who, as the ad implies, is not the Secretary’s boss.  Date night, you’re never going to be missed again!

1950s Secretary advertising and short films always make the job look glamorous, but in reality, it isn’t.  There’s papercuts, deadlines, and yes, mailings.  Let me tell you, having a postage machine really does help with the day-to-day.  The glamour part?  That’s up to you. 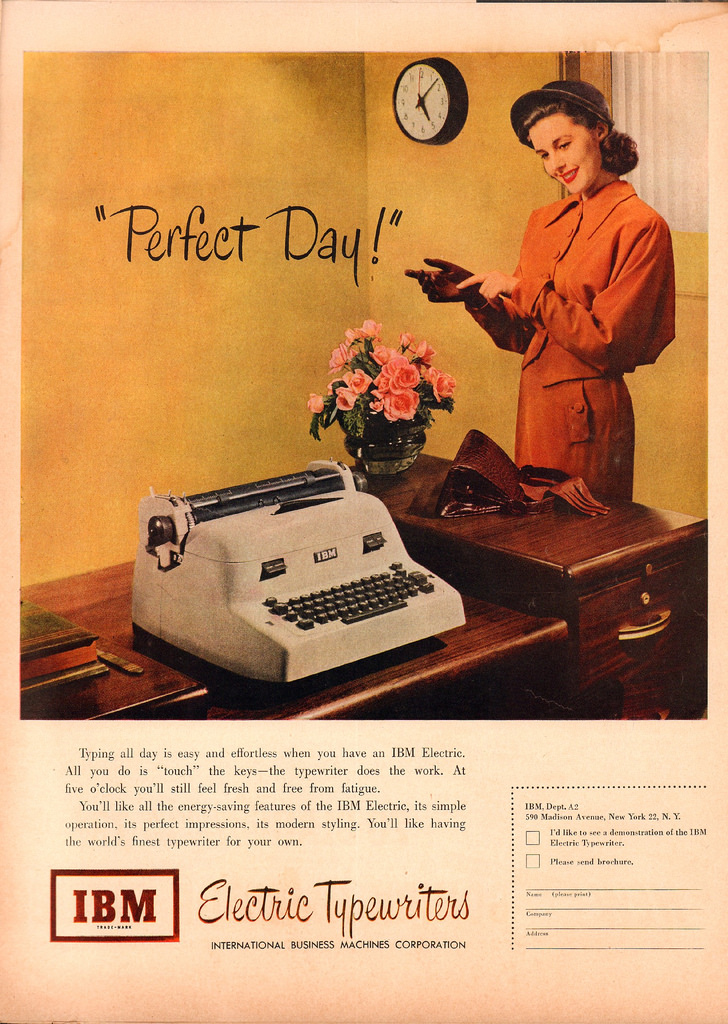 Yes, the typewriter does all the work.

My keyboard is writing this on its own.  That’s not normal, that’s the fact that my keyboard is possessed by a ghost.  A writing-procificent ghost.

I sit like that on my chair everyday, said no Administrative Professional ever.

Because that’s what the men in the office always look at first.  Your hands.

Yep, I’m turning this into one if those old film shorts that clearly displays sexual harassment and objectifying but never calls it that.

Wear Your Maidenform…And Nothing More!

And all the men had dreams about her that night.  Bra, what bra?

And there you have it, advertising that takes us back to a simpler time when Secretaries (as they were called then) were merely eye candy for the misters of the office.  Their hands had to be perfect, they wore their bras (and only their bras) to the office, and the men could even resort to murder over a postage machine.

It was fun.  Simpler times!

Have a great rest of Administrative Professionals Day!