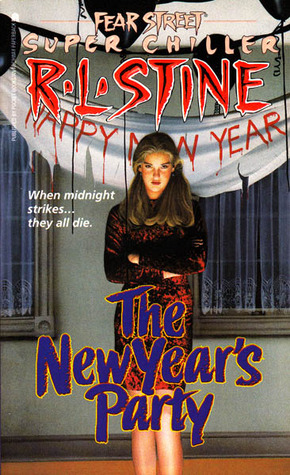 My latest Goodreads review, and my first book of my 2018 Reading Challenge takes me back to my teenage years, and another series I read regularly.

And I thought The Baby-Sitters Club took me back!

In tandem with reading Ann M Martin’s tales of teenage baby-sitters and their adventures, I was also reading R.L. Stine’s novels about teenagers in horror-type situations. I began reading the Fear Street series in fifth grade, and read them until about ninth or tenth grade. I don’t recall what book series I moved on to after that. I’m actually not sure if I chose any book series in high school. I don’t remember doing tons of “fun reading” after ninth grade, or having any particular interest in any book series after Fear Street.

I had the majority of the original series, the Cheerleaders, and Superchillers. Of those novels, and I had also checked some out from the library at varying points, so all told, I probably read over sixty of the novels. Where Goosebumps failed to hook me (my brother read those novels, which in hindsight, were more age-appropriate at the time), Fear Street sucked me in. The appeal was the longer length, and yes, the stories were utterly fascinating when I was in middle school.

That’s second to having read ninety-plus Baby-Sitters Club novels, and around sixty of the Baby-Sitters Little Sister novels. All of this, I should mention happened around the same time in elementary school.

I happened upon The New Year’s Party purely by happenstance (and happy accident) while searching for a “New Years” book to close out 2017 in reading. Among all the kid-friendly novels and children’s books, I found this one. No surprise on my part, really. And upon seeing the cover, I recalled immediately having read it at some point (I’m wondering if it was New Year’s at the time?).

The story starts off in 1965, at a New Year’s party Beth Fleischer’s friend Karen is hosting. Beth is keeping a vigilant eye on her friend Jeremy, who is being picked on. A group of robbers break into the house (it is actually a prank), and their grabbing of Jeremy and scaring him forces him to run from the party. Beth runs after him, and decides to go with him through the dangerously snowy roads of Shadyside on that night, only for the car to crash, but not before they’ve hit something in the road. Both Beth and Jeremy die as a result.

Present day (1995): Reenie Baker, her boyfriend Sean, friend Greta, and Greta’s boyfriend Artie (as well as new kid Ty) are practical joke-loving teenagers, sticking mostly to innocent jokes. Two new kids, Liz and P.J., show up at their high school. The group welcomes them into the fold, and invite them to Reenie’s Christmas party. When a practical joke goes awry, the group of friends are thrust into a horrifying series of accidents, all leading up to a New Year’s they’ll never forget.

I LOVED this book! Once I had started reading the first chapter, I remembered the story immediately. I kept saying to myself that I knew how it ends, but it didn’t make the ending any less exciting! The plot sucked me in all over again and kept my interest, right up until the climax, and whoah, what an ending!

I’m not sure how well-revered this series is among today’s teenagers, but this was what teenagers were reading twenty years ago. We didn’t have the YA book series teenagers have now. We instead had an anthology series about teenagers in an Ohio town, with a haunted street named for a haunted family.

If you’re looking for a read that will really take you back 20 years, I highly recommend trying any of the Fear Street novels again. It doesn’t have to be this one, but it is a New Year, after all…

View all my reviews

Purchase The New Year’s Party on Amazon (and explore the rest of the “Fear Street” series!)