He’s so screwed, let me tell ya!

It was the time I aimed my “light gun” at strobe light targets in a vain attempt to do something, and yet, nothing all at the same time!

I’ve written several articles over the years about a short-lived video game “console” called the Action Max, released by Worlds of Wonder in 1987.  The system lived and died within the year.  I’m sure it had at least something to do with Worlds of Wonder filing for Chapter 11 right after the October 19, 1987 stock market crash (nice to know my 5th birthday was such a dark day on Wall Street!), but my theory has more to do with the fact that the system is just, well, terrible.

Don’t let the thirty seconds of lies tell you otherwise.  I owned one – got it for Christmas in 1987 – so I could prove that theory as true.  The experience was totally non-interactive.  Nothing you do or don’t do changes the outcome of the game.  All shots you take total up into a score, but some games rank your ability based on that score, meaning that you could potentially lose points for aiming at the wrong object/person.

And as I came to find out while working on this video, it makes it easy for you to aim at the wrong thing.

For your Halloween enjoyment, we’re going to “watch” one of these videos in action. 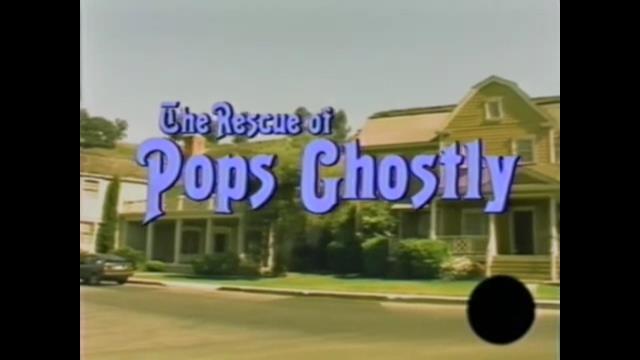 The Rescue of Pops Ghostly, likely the kid-friendly video in the bunch, asks you to take aim and help save Pops Ghostly and his family (wife Moms, and son Gordy) from the evil ghosts and spirits that threaten his peaceful home.

Yeah, I consider a house inhabited by friendly ghosts smack in the middle of the suburbs to be a haunted house.

It’s a not-so-spooky tale of doggie skeletons, spirits with monkey screams, and a vortex into space complete with a Twilight Zone rip off moment that the estate of Rod Serling should sue over….if they were able to find someone to sue.

And it all happens because two kids ran after their dog, “Arthur.”

Yeah, there’s something complete goofy about that part of the “plot,” but I promise, you’ll get some good laughs.  And here to guide you on your journey to save Pops and his family (are they worth saving?) is…me!

That’s right, I’ll be here to provide a “play-by-play” commentary of the “game.”  Others have played snippets of it while commenting, but I force you to watch the whole thing.  That’s the difference with me, folks – I’m a torturer of souls and sanity.

So grab your light gun and ready yourself, we’re going in.

Thanks for watching, and Happy Halloween!