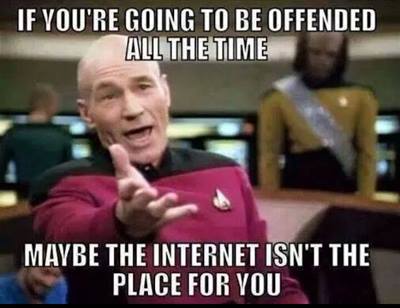 A Public Service Announcement, if you will.

I can never say my Facebook timeline memories are a barren wasteland of crap, when stuff like this exists.

This brings up a good point.  If I’ve learned anything from the election coverage (and the state of the news in general), it’s that people are quick to fight and get offended by EVERYTHING.  It’s the race card, the woman card, the a**hole card, the card that apparently gives people the right to say whatever they want without regard, all because they have a computer to hide behind.

I’ll pose the most simple solution I can think of: Stop it.

Stop openly displaying your show of being offended/overly opinionated.  Nobody likes a whiner.

It’s easy to get into an argument when it isn’t face-to-face.  If anyone knows this, it’s me.  I’ve been broken up with (and have ended relationships) via text.  It’s impersonal and terrible, but when something is at its end, it makes life easier not to confront the problem face-to-face.  The same goes with arguing on social media about your opinions and feelings on something – sure, it’s less messy, but you’re merely hiding your face and only forcing something to fester.  It’s always easier to write things down, when you have the ability to compose your thoughts, but as a society, we’re too quick to say exactly how we are feeling without thinking or rationalizing our thoughts.  The enter key gets hit, and boom, damage done.

It’s Out There…And You Can’t Unsee It.  I had an ex-boyfriend who went back through six months’ worth of tweets, because he was looking to see if I was talking to a particular friend of mine that he did not like.  You read that right, an ex-boyfriend.  And yes, you read the other part right…six months  This was an ex I hadn’t dated in three years AND had a messy and contentious relationship with.  Even the break-up was messy.  I didn’t date for four years as a direct result of the relationship ending, and he jumped right into a new relationship within two months of ours ending (guess how that worked out).  He found several tweets I had contributed to a hashtag thing Jimmy Fallon was doing on Late Night at the time (something he still does on The Tonight Show) about bad boyfriends (or something like that, this was in 2011, so I’m not quite remembering the exact hash tag, but that was the premise).  All of the tweets were things he did…and he realized it.

What happened next was a barrage of text messages (why did he still have my phone number?) about how that was terrible of me, and how he was considering seeing if I wanted to do something, but to “forget it.”  Oh, and he was mad I was communicating with the friend he didn’t like.

None of the hashtags got selected, by the way.

It was the Heat of the Moment…and you look dumb. I’ve seen a few crazy “heat of the moment” moments happen on the interwebs.  Political disagreements, irrational upset over something that really only warranted mild disappointment, and the like.  I’ve had my own “heat of the moment” moments.  I’ve found myself beginning to write a Facebook status, but I’ve manged to stop myself, because I knew the consequences were just not something I could live with.  I didn’t want my family to see certain things, I didn’t want co-workers to report me, and I certainly didn’t want to be reminded of having the moment.

Which brings me to my final point…

GET OVER YOURSELF!  Simply put, you’re not the only person alive.  Earth doesn’t rotate for you, life isn’t stopping for you, and let’s face it, you’re making me cringe if that’s how you feel about your wonderful self. Ok, it’s refreshing to know how highly you regard yourself, and how obviously confident you are in your existence and abilities, but when you’re convinced the world is coming to an end because of something you’re unhappy about, reconsider your priorities.  Obviously, if your biggest crisis in life can cause you to feel self-centered, then things in your world aren’t so bad, now are they?

And it all goes back to the original point, stop being offended.  If Picard tells you to do it, then do it.

Carry on with your life.  I’ll be checking to see if anyone reads this. 🙂