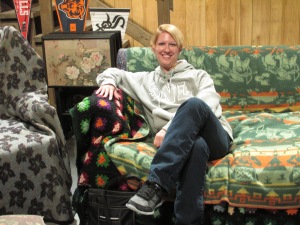 Me.  The couch.  Wayne Campbell’s basement.

I was just living in one.

And yes, I still know that station ident after all these years. 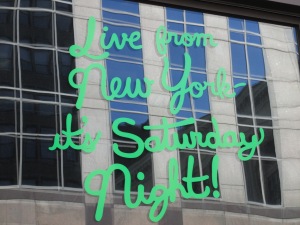 On October 10, 2015, I had the opportunity to celebrate my 33rd birthday nine days early in New York, visiting Premier Exhibition’s Saturday Night Live: The Exhibition, a walk-through exhibit about the history of eponymous icon of television’s first forty years.  The day I went was special for two reasons – this was something I wanted to do to make my birthday huge (in a series of “big deals” I’ve been fortunate to have this year), and the visit happened one day before the show’s 40th birthday (which was actually celebrated during the 2014-2015 season).

I planned this as a last-minute day trip, made possible through alot of transportation research.  In other words, it was the figuring out of how to get there that posed the biggest challenge.  While I knew the train was the most practical (at least for me, because I don’t drive nor have a car), the challenge was finding a train to get there.  Since I use 30th Street Station as the way station for places I like to go in Philadelphia (or to the airport, as I tried for the first time this year when I went to Chicago), I did some research.  When SEPTA and NJ Transit failed to be a good mode of transportation (a trip that would have taken five hours), Amtrak became the best way to go.  It was a costly alternative, but one that shaved two hours off each way.  But where I paid for transportation to get there, I saved in having to get a hotel room.  So it all worked out well.  It was a long day, but it all worked out the way I planned it.

The day started off with an early morning ride on the rails to 30th Street Station, then onto New York via Amtrak’s Keystone service.  A comfortable ride took me the 90 minutes to New York, through scene Bucks and Berks Counties in Pennsylvania, to the not-so-scenic Trenton, NJ, then through scenic communities in Mercer and Middlesex Counties, onward to the oh-so-lovely sites of Newark and their Penn Station (not to be confused with New York’s Penn Station), and finally to New York City’s Penn Station, located beneath Madison Square Garden and smack in Manhattan.  I arrived by early afternoon, and made my way toward 5th Avenue and West 37th Street, where Premier Exhibitions hosts the exhibit, on display until January 2016.

And it was in sight… 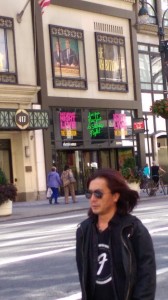 And so was some guy.  But still, in sight! 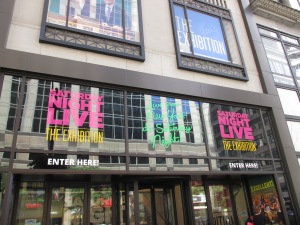 Once I entered the building, I went up the stairs to the box office, where my prepaid ticket was scanned.  Your first stop is a brief video about the history of Saturday Night Live, and the doors open to reveal a red carpet leading to a giant photo of homebase, the main stage of Studio 8H.

The exhibition runs through the six-day process of putting on the show, beginning on Monday with the host meeting everyone, to the Tuesday writing session, to Wednesday read-through, Thursday blocking and set construction, Friday pre-taping and rehearsals…to Saturday rehearsals and the final product.  And even further into this, guests are treated to a look at costumes, props, recreated sets, audio, video, and there is so much to take in.  To be in the history of the show itself is amazing – I’m a huge behind-the-scenes buff, and this whole experience is ideal for visitors who are into the experiences of what happens in the production end.  While this is very actor-centric, the real credit goes to what goes into putting on the show, and the efforts of the people who make it happen every week.  Much of the crew is seasoned and know the ropes.

The exhibition includes two actual sets that guests can be photographed on: 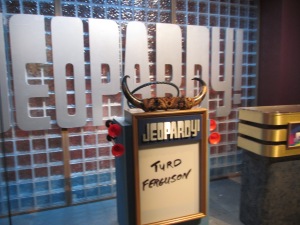 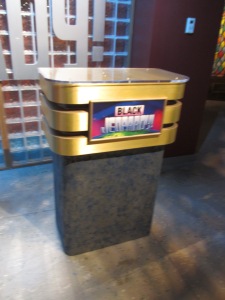 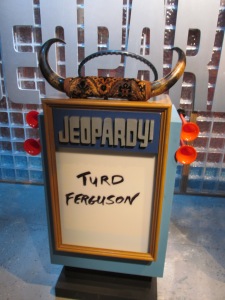 Celebrity Jeopardy/Black Jeopardy, complete with Turd Ferguson as the name on the podium.

As well as photo opportunities in a mocked up control room… 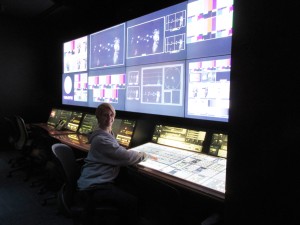 And the re-created studio, though no one was allowed on stage.

Oh, and there’s the “Weekend Update” desk, where for a nominal fee, guests would be photographed three times, with their favorite anchor(s) digitally inserted.  You get to freestyle your poses for the first and third photo, and turn toward the anchor in the second photo.  You get a printout of your choice to take home, and an identification card with a code to access all of your photos for download.  The desk is one of the actual desks used on the show.

With Tina Fey, who is trying to ignore me. 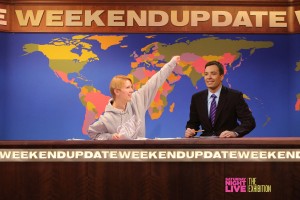 And with Jimmy Fallon, while I do my best Dennis Miller signoff, sans pen in hand.

If you’re into costumes, there is a whole room devoted to some of the most well-known costumes, from the Spartan Cheerleaders to Mary Katherine Gallagher, Beldar and Prymaat Conehead, Barry Gibb, Donatella Versace, Stefan, and even Vincent Price, there is something for everyone’s interest.

But the costumes are also scattered throughout the exhibit.  I even found the Wayne’s World outfits, Burt Reynolds (complete with oversized cowboy hat), and D**k in a Box.

Makeup and prosthetic pieces, and even teeth! 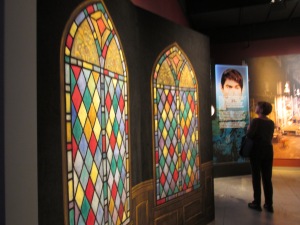 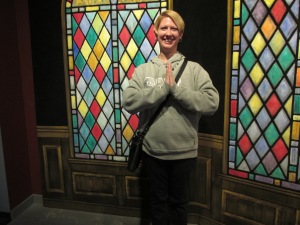 As you move toward the end of the exhibit, there is this amazing wall of all the actors who have starred on the show for the entire forty years.  Some faces we know and love…

And some it was likely forgotten they were ever on the show.

Yes, that’s Damon Wayans – he got fired in 1986.  Let’s just say Ben Stiller started the same time Mike Myers started (they even debuted on the same episode in January 1989), but it wasn’t meant to be.  Oh, and there is a picture of Anthony Michael Hall and one of Robert Downey Jr. near Damon Wayans…bet you forgot about that too, right?

At that point, visitors exit the tour to the soundbyte of the “buh-bye” sketch, down the elevator, and to the gift shop. 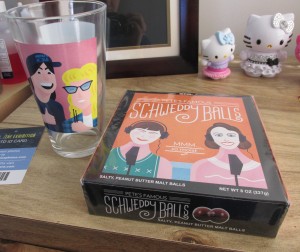 Where I bought stuff.  Not pictured is the oversized and warm sweatshirt I bought.

In all, this is a fantastic exhibit with tons of history and fascination around every corner, in every room.  For the most casual viewer, there is alot to take in, but for those who have been watching the show consistently, all of this will be recognizable.  I’ve been watching since 1993, but with reruns in a constant rotation for me since 1996, I’ve always been able to fill in the gaps that I was too young to witness.  There is a little something for everyone’s interests – from costume and makeup to production design, direction, writing, or acting.  It’s an incredible process from the concepting of sketches to the final product, which is live and unpredictable due to the nature of the show.  While my feelings are mixed about the current seasons, it’s the history that continues to draw me in, when there were regular characters worth tuning in for.  You’ll get a mix of classic and current, and you’ll be entertained by all of it.

In short, I highly recommend Saturday Night Live: The Exhibition.  It’s worth your time.

Cost: $29 for adults, $20 for children ages 5 to 11, and $24 for seniors 65+.  If you pre-purchase tickets online, there is a $2 order fee.  Tickets can purchased at the box office directly, and all tickets are good for 180 days from purchase.  They’re not timed, so you can show up at any time and go right on in.  There is a short film at the beginning of the tour, so be sure to get your ticket and get right in line.

And take way too many selfies…and recruit people to take pictures for you. 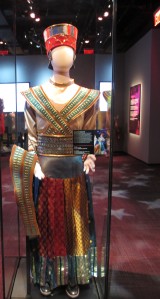 Not included in the King Tut exhibit: This King Tut.

The tour is self-guided and self-paced, so if you’re anything like me, allow for 2-3 hours to completely take in the entire exhibit.  Examine everything as closely as you can, and arrive early enough to allow for optimal time and minimal crowds. Despite going on a Saturday afternoon on a gorgeous day, it was minimally crowded, due to New York ComiCon being held at the Jacob Javits Center nearby.  The minimal crowds were to my advantage, and I was able to take my time walking through the different rooms, and not have to fight the crowds.

I hope you enjoyed my rather detailed look at an amazing exhibition, and if you live within the New York area (or nearby…or as nearby as two trains connecting in Philadelphia, PA can get), definitely be sure to check this out!

You’d think I bribed you with a Candygram or something. 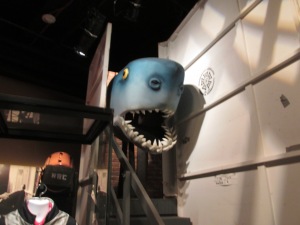