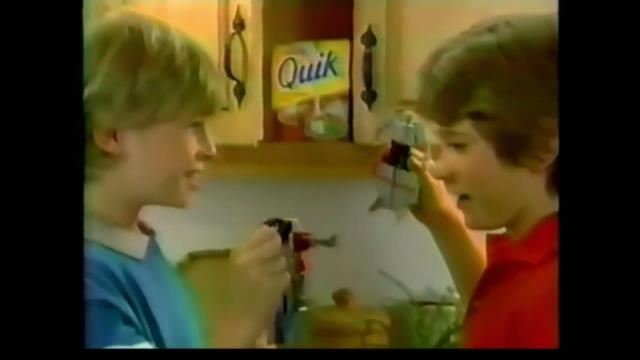 We’re buying our favorite foodstuffs and tearing off our game pieces in the hopes of being that “1 in ridiculous odds” that wins the Grand Prize!

From processed pasta and third-rate puppets promoting Mattel toys as prizes to powdered and liquified chocolate product and robots, we’re sticking with 1985-1986 as the timeframe of today’s sweepstakes we wanted to enter, with the promise of winning toys, and a grand prize being ALL THE TOYS!

The product is Nestle Quik, and the sweepstakes is The Challenge of the GoBots Game!

The GoBots was a series of toys produced by Tonka from 1983 until 1987, coinciding with Hasbro’s superior line of Transformers. Even though those toys came a year after Tonka released their GoBots, the capabilities and overall media presence of Transformers were just so much greater. Throw in a movie that had lackluster returns, and the whole series was basically done by 1987. The television series Challenge of the GoBots ran for 65 episodes over two seasons from 1984 until 1985, with a follow up film GoBots: Battle of the Rock Lords opening in limited release (mostly matinees) on March 21, 1986. The Nestle Quik contest ran around the time of the feature film’s release.

I actually do remember GoBots, since my brother did have some of the toys, as they were a little less complicated for smaller hands, but he was big on Transformers (as most 80s kids were), and did have some of those toys. I’m sure the GoBots and Transformers received many a crossover during many a 1980s playtime. I’m not sure if we watched the cartoon or the movie, but you know we watched anything that had to do with Transformers.

So, whatever happened to GoBots? Well, with Hasbro’s 1991 acquisition of Tonka, the fictional side of the property, which includes character names, bios, and storylines, the actual physical properties – the toys – were likenesses licensed from Bandai in the 1980s, and not available for Hasbro’s use. Battle of the Rock Lords established an alternate universe within the Transformers Multiverse, so the two properties have a “Six Degrees of Separation” quality to them.

Pretty sure Kevin Bacon is tied into this somewhere.

Unlike Mr. O’s Funtime Instant Winner Game from yesterday, Nestle Quik’s Challenge of the GoBots Game has a little more of an internet presence, even if it is through scans of print ads in comic books, and not much more.

I love stuff like these sweepstakes, as the curiosity hits me and makes me wonder if anyone out on the interwebs actually entered one of these contests, and came up a winner. I love Google searching with the hope of finding the Grand Prize Winner of every GoBot toy manufactured up to that point. You wonder how many GoBots toys this kid already had, and just figured, “oh, I can win another,” but winds up with this massive collection! I had mentioned some time ago about Tang’s Scooter contest, and actually wound up getting comments fairly recently from people who won the the scooter.

I actually have two more sweepstakes to cover in the coming weeks, but next week is interstitials week, and I’ve got two more to impress you with.

So yes, the sweepstakes will be back…in two weeks!

Until then…”not the river! Ahhhhh!”