Which guarantees awesomeness and happiness, because, well, Friday!

We made it to the weekend!

I don’t know about how your week went, but if it was anything like mine, it went fast. Having a Monday holiday really makes the week just fly by.

Also flying by?  The product you could win for drinking today’s advertised product.

This week, we’re delving into the archives of 1987 and focusing on delicious juice drinks.  Yesterday, we had kids informing us that, with Goya Nectars, we “could taste the taste they got,” freeze ’em, and eat them!

Today, we’re drinking the stuff of space explorations, all so we could win a super cool prize!

Wow, must be stirring up something AMAZING!  Click play for more! 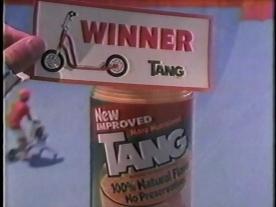 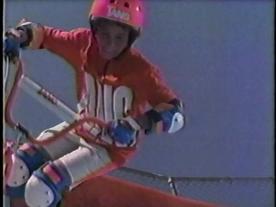 Only if you enter by writing to this address…or finding a certificate in your Tang jar! 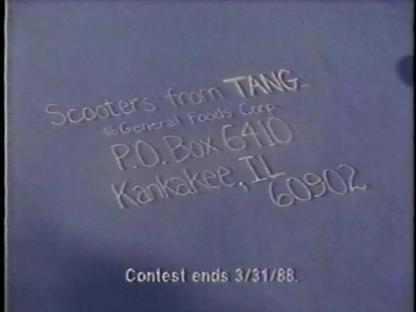 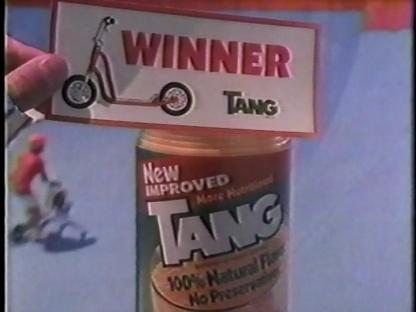 Well darn, that was 30 years ago! Now I’ll never get my scooter!

Actually the “millions will enter, thousands will win” disclaimer is code for “not a chance in hell.”

I wonder how many people actually won these scooters.  Since typing in “Tang Big Orange Scooter” got me this top find, and not some personal blog story about the time someone won a Big Orange Scooter from Tang in 1988, then I guess we’ll never know.

Tang is still very much produced today.  It has been around since 1957 (in powdered form since 1959), but only became popular after it was famously consumed by John Glenn in 1962 while in space.  Mondelez International currently owns the brand, but it was originally created by General Foods Corporation Food Scientist William A. Mitchell.  It was part of General Foods Corporation from its inception until 1990, when General Foods merged with Kraft.

So we’ll call this week a double victory, as both featured products still exist.

Last night, while Iwas grocery shopping, I actually saw Goya Nectars on the shelves at Wal-Mart with other Goya products, and I have seen plastic containers of Tang among the powdered drink mixes at every store I shop at.  So we’ll call this week a double win for two still-existing products.

We don’t have victories like that very often, folks.  Let’s enjoy this.

And that does it for this week’s blast from the archives of the past.  Come back next week, where we’ll do it all over again.

Maybe a double win next week too?

Have a great Friday, and a fantastic weekend!