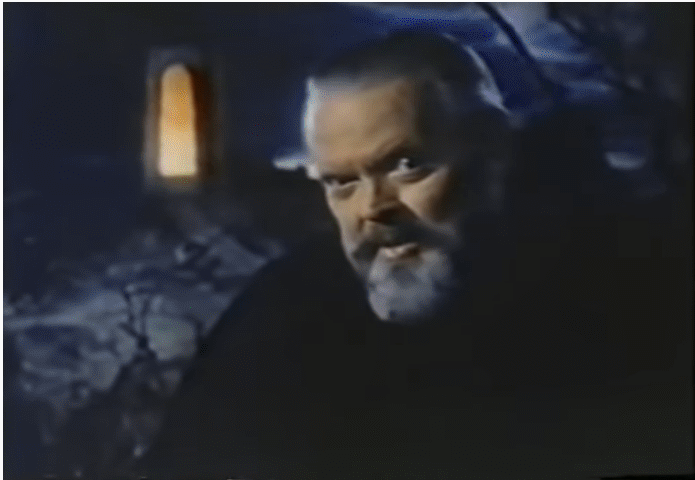 …and I was victorious…in finding more commercials by a subject I started on last week!

As for last week…

I closed out a rather deep look at the part of Orson Welles’ career where he hocked wine, and promised more from that phase of Welles’ work, which was born of clearly needing work.

I also shared gifs of an animated parody of Welles hating every minute of it.

But clearly loving the product he promoted.

Anyway, let’s get past the Drunken Orson Welles moments, and move on to products not containing alcohol…

As the 1970s drew to a close, and the 1980s began, actor/director Orson Welles was helping turn an inexpensive wine into something classy. It was, as I said, “a strange trip through consumable goods, blooper reels, and obvious inebriation,” and it was nothing short of funny.

The swaying and obvious drunken stupor never gets old.

Budget wine was not the only product Welles hocked in those lean years of the 1970s and 1980s – his was a portfolio that included board games, frozen food, and copy machines.

When you’ve been an Administrative Professional as long as I have, this is the most intriguing part. It shouldn’t be, but the idea of Orson Welles making copies has me waiting anxiously! I mean, the man was Citizen Kane, and he’s reduced (of his own disastrous making) to hocking the machine people like to break and run away from in the office.

Oh, that’s never happened to you before?!

Let’s move on, before I start dredging up personal stories of broken copy machines and tech support.

The commercials I found today reflect the wide range of products and services Welles did advertising for, including more alcohol (this time for Carlsberg, Domecq, and Nikka, and he seemed sober…I think?), Walt Disney World, Nashua Copiers, Eastern Airlines, Findus Frozen Foods (which was parodied on The Critic as “Rosebud Frozen Peas” and “Mrs. Pell’s Fishsticks”), Preview Subscription Television, Perrier, Uniroyal Tires (in a crossover with Thor of the comic strip B.C.), and the Dark Tower board game.

He even did trailer voiceovers for movies, before “In A World” became the standard in movie trailers.

Some of these commercials featured Welles on camera, while others involved his narration. It is these commercials that feel more dramatic with his eloquent way of speaking promoting the very products and services he probably wasn’t thrilled about promoting.

But even so, he certainly does it with a certain gusto and conviction, especially the commercial for Dark Tower.

If you look up Findus Frozen Foods, you’ll wind up with an outtake reel of Welles recording a commercial about frozen peas, complaining about how there are two directors, and the copy he has to read.

Like I said, this is was parodied on The Critic. I didn’t know for some time that this was a parody of an actual commercial.

But it was. In a recording studio, Welles had to talk about the dramatic process of picking the perfect peas for Findus Frozen Foods.

“Peas grow there” is far worse than “full of country goodness and green pea-ness.” I’m not a professional writer, and I even know that sounds awful!