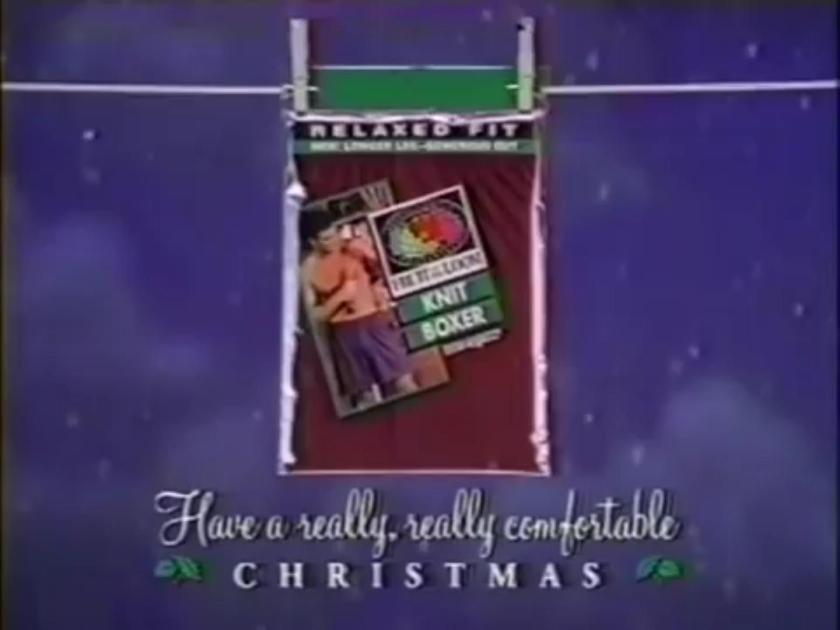 …and week before Christmas!

Twas the Night Before Christmas, and Santa couldn’t decide, what kind of underwear to wear on the ride.

You’d think this type of situation falls under “first world problems,” but in actuality, comfort is everything. Comfort isn’t always something we can control, but for the situation of undergarments, it is entirely possible to do just that.

As we are now eight days from Christmas, we are moving into Final Christmas Commercial Territory, moving away from two weeks’ worth of giant commercial blocks, and on to completely Christmas-centric advertising. Today’s commercial comes from 1996, and discusses a “first world problem,” long before such a phrase was coined.

Ah, 1996, you were such a simple time. The biggest issue meant the right undergarments.

In our first commercial, we have Santa’s underwear dilemma, the second is a depiction of “The Nutcracker” that you’d rather not deal with, and the third explains the perks of buying white briefs from Fruit of the Loom.

Because apparently, there is/was a perk.

Here’s to comfort, and boxer briefs, loose fit boxers, and one free pair of briefs in a package of tighty whities!

Fruit of the Loom has been making Christmas (and everyday) “really, really comfortable” since 1851, manufacturing not only underwear, but also t-shirts, hoodies, sweatshirts, lingerie, and shorts, but also sports equipment manufactured and commercialized by Spaulding. A subsidiary of Berkshire Hathaway since 2002 (yes, THAT Berkshire Hathaway), Fruit of the Loom acquired Russell Athletics in 2006, and Vanity Fair in 2007.

The company is well-known for its fruit logo – the apple, grapes, green grapes, leaves, and currants, and you’d be hard-pressed to not find their product line anywhere you shop for, well, this kind of stuff.

I love these commercials, especially that “Dance of the Sugar Plum Fairy” commercial, featuring jingling underwear. It seems sorta provocative, don’t you think?

“Jingle Bells” would have ensured this was “too provocative.”

The line about Santa loving his new boxer briefs and hoping that maybe someday, they’ll make them in red, probably already has happened.