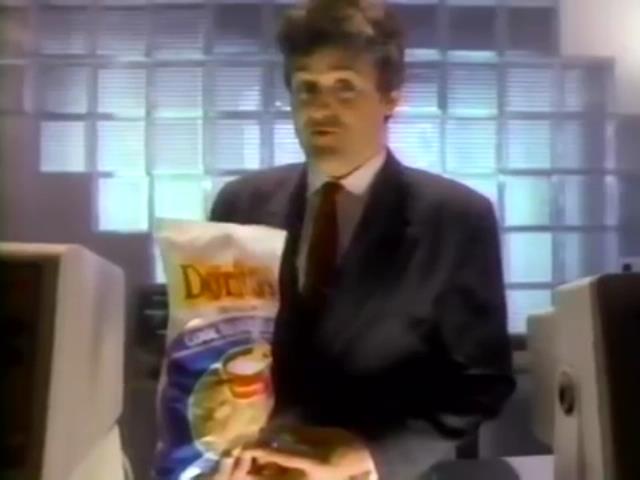 However, it doesn’t take much to get chip technology and computers very excited…over Cool Ranch Doritos!

Herbs, spices, tomato, and onions combine with a Secret All-American Ingredient that is enough to turn technology on its head in today’s commercial, from 1988.

Don’t believe me? Watch the commercial!

Who knew Doritos (more specifically, that Secret All American Ingredient) could wreak such havoc…and that Jay Leno would lead the charge?

In his days before hosting The Tonight Show, Leno served as a guest host (beginning in 1986), filling in for Johnny Carson), During that time, he was doing standup comedy, acting (remember Collision Course? I do!), and yes, he was a Doritos pitchman, one of several notable celebrities to do so. Prior to his regular guest hosting duties, Leno had made appearances as a comedian, debuting in 1977 on the show.

As for Cool Ranch Doritos, they made their debut as a Doritos flavor in 1986, and are still sold today, even as other flavors and styles of Doritos have come and gone. Heck, they have even outlived Leno’s tenure with The Tonight Show, which lasted from 1992 until 2009, and again from 2010 until 2014.

I started watching The Tonight Show during summer break from school in 1994, and watched is regularly for the remainder of Leno’s association with the show. At the same time, I was a fan of his late night contemporary, Conan O’Brien, and I started watching his show about the same time. Even as an eleven-year-old, I loved their style of comedy. These days, I love Jimmy Fallon (though we can date that love back to 1998), but admittedly, I don’t watch his show as regularly as I did when I still lived at home.

Apparently, tasting as good as they crunch will earn you a long life with a happy and dedicated fan base.

No crunching involved in his fan base, which included this writer.