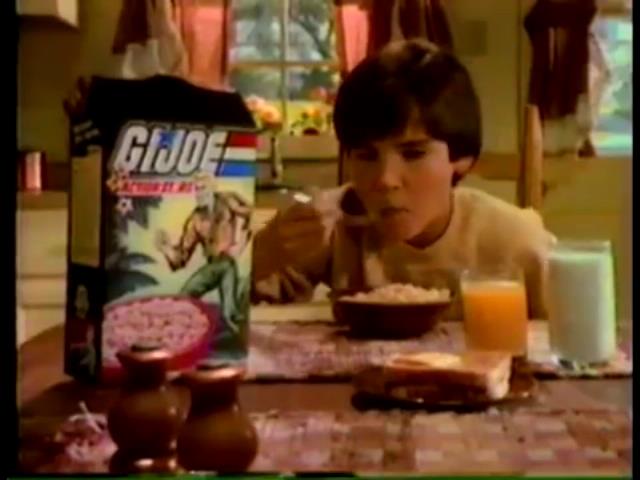 I have yet to see the kids eat the other part of those “complete” breakfasts.

Welcome back to 1985 – the hair is big, cartoon characters have tons of tie-in merchandise, and the breakfast cereal is an adventure in eating!

Which brings me to today’s commercial, in which breakfast time means play.  I guess these kids give themselves ample time in the morning, because when I was this age, I never had the kind of time today’s cereal kid has.  But that was in the 90s, it was different.

Anyway, tucked into a quiet corner of suburbia…

This is Ryan’s mom.  And she has Ryan’s new cereal!

And this is Ryan.

Unlike Ovaltine-Dissing Alan (“do I have to?!”), Ryan is looking forward to his breakfast of G.I. Joe Action Stars Cereal (a delicious part of a complete breakfast!)…as long as he can get to it.  Can he do it?  Duke believes Ryan can, and I know that I always believe licensed animated characters directing me through my house…

Looks like Ryan has a bit of an adventure ahead of him.

Again, I always trust licensed cartoon characters guiding me on the path through the apparent treacherous and harrowing obstacles of my own home.

You know, a delicious part of a complete breakfast and all.  We should all attempt to brave everything for that goal!

He even wears his game face AS HE EATS!

G.I. Joe Action Stars Cereal was first manufactured beginning in 1985, and continuing until 1990. Ralston (part of Ralston Purina until 1994), when the “human food” division was spun off into Ralcorp Holdings, which still exists today.  Ralston manufactured Chex and Cookie Crisp, both of which are still available today (and both delicious, I might add), but also had the licensed character cereal market cornered, with Batman, Bill and Ted, Cabbage Patch Kids, Barbie, Donkey Kong, the Jetsons, Rainbow Brite, and the Nintendo Cereal System in their corner.  Of course, this was in the heyday of licensed characters having a stake in every facet of an 80s kid’s life.

I mean, you know they’re legit when Robin Hood: Prince of Thieves had a cereal, right?

Supposedly, they look a certain part of male anatomy, that looks nothing like Kevin Costner on the box, and this was a one-off tie-in.

As for G.I. Joe Action Stars Cereal, the box had multiple variations, featuring different characters drawn on the boxes in action poses.  Duke (of course!), Gung-Ho, Shipwreck, and Quick Kick were among the characters featured on the boxes.

But let’s face it, you told your grocery shopping, naive to GI Joe mom “buy the one with Duke, or nothing!”

Did anyone ever send away for that shirt?

As for the cereal itself, it was oat and grain pieces shaped like – as the name implies – stars, and tasted like Cap’n Crunch. 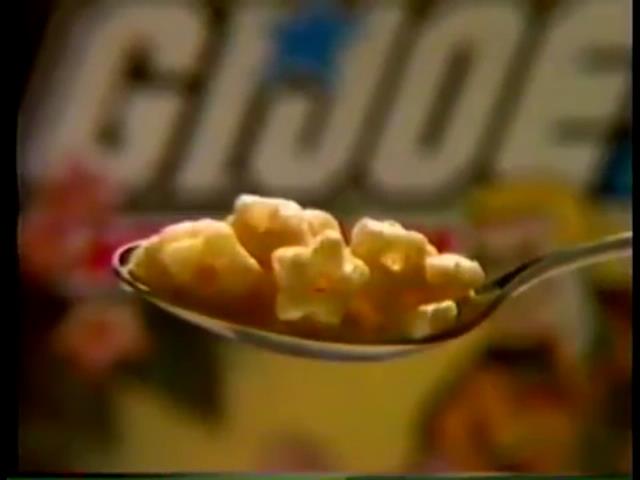 Also of note about this commercial – it featured Starduster as the “Joe” responsible for getting Ryan to school – because, again, I trust the animated licensed characters in my house with my life, as well as the responsibility of getting me to “fly away” to school.

Starduster was an action figure only, and never part of the cartoon.  This was his only appearance in animated form.  Even crazier, this was two years before he made his first appearance as an action figure, and even then, he was a mail-in exclusive for the cereal, and later from Hasbro Direct.  He was featured in three of the out-of-continuity comic books that came with the cereal, and today his name is Skyduster.

As I said, Action Stars Cereal lasted until 1990, probably because of two reasons – waning interest in G.I. Joe coupled with the Children’s Television Act of 1990.  Those awesome tie-in products became a thing of our awesome 80s.  Not to say our 90s weren’t awesome, but those tie-in cereals were kaput with the 1990s.

As for G.I. Joe, the cartoon itself ran in syndication from 1983 until 1986 (under Sunbow-Marvel), had a direct-to-video movie in 1987 (also Sunbow-Marvel), and a revived series (under DiC) for syndication in 1989 with a five-part miniseries, and then for two seasons/44 episodes from September 1990 until January 1992.

By 1989, lackluster performance of the toyline convinced Hasbro to scale back, focusing on the action figures and not as much on the vehicles.  The end of the Gulf War, as I had heard, was pretty much the end of Generation 1 cartoon.  The toyline for Generation 1 was produced until 1994.  The toyline and cartoon have been revived several times over the years, beginning in 1997, but nothing of course compares to the original.

Yes, I watched both series and saw the movie in the mid-1980s.  I have a brother, so I was into all of this.  It all still looks as good as I remember it – or at least, the opening credits for the shows and the theme songs do.  Not sure how good the actual plotlines are – it has been almost 30 years since I watched anything G.I. Joe.

As for this cereal, I didn’t eat sugary cereal, and certainly not the ones with licensed characters on the boxes.  Cheerios, Rice Krispies, Chex, and Kix only (Reese’s Peanut Butter Puffs were for snack only).  Berry Berry Kix was probably stretching it a bit.  Nothing sugary – it was my mom’s doing, and I never developed a taste for sugary cereal as a result.  I’ve always associated sugary cereals as snacks, not actual meals.  Call me boring (my husband has made fun of me about this), but that’s how I am.

My licensed characters were for fun, not food, but the commercials – including this one – certainly made the prospect of having the cereal quite the adventure!

Seriously, where is this house located?