Happy New Year!  We made it to 2019, and hopefully, so did your technology.  But there was this crazy time nineteen years ago when we all feared the downfall of society as we know it the moment our clocks reached midnight, and our calendars read January 1, 2000.

Oh what crazy times they were!

I was seventeen years old, an eleventh grader reading The Gift of the Magi in American Literature, while studying the World War 2 in US History, writing papers on various topics of Psychology (while flipping through copies of Psychology Today during downtime in class), a fourth year Spanish student, frustrated by Algebra, and even more frustrated by Chemistry.  I liked school, but eleventh grade was not one of my favorite years.  We had just finished the High School Proficiency Test two months earlier, and I found out I passed all three parts, making me eligible – from a standardized testing standpoint – for high school graduation.

The internet at that time was a novel concept – we used it for research purposes, and not for the fun and varied things we use it for today.  One thing I had been reading on America Online (or AOL, as the cool kids called it) was about this whole Y2K thing.  The news kept reporting on it, and it was basically the end of the world, or at least, the end of the technological side of it.  Our computers would not be able to handle the transition from 12/31/1999 to 1/1/2000, and the chaos would ensue at the changing of the clock on that day.

The “Year 2000 Problem,” also known as the “Y2K Problem,” and “The Millennium Bug,” was this computer bug that would affect formatting and storage of calendar information for dates beginning in 2000.

What we were told was that our computers and all technology would become non-functional after 1999 was over.

In fact, if you went shopping at any point leading up to the anticipated date of the Y2K Crisis, this is what you found:

And if you watched the news, you saw this: 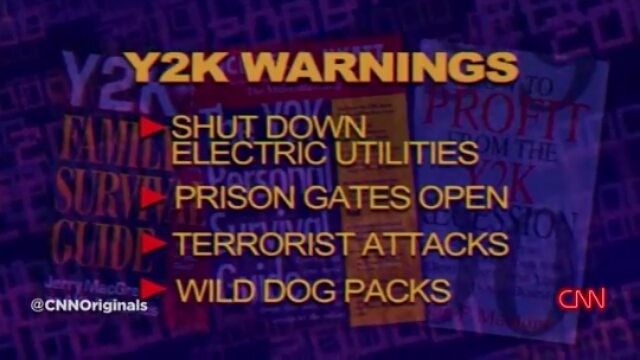 Source: Pinterest (User: The Monkeys Keep Me Up at Night)

And, if you were just off the deep end to an extreme amount, and wild dog packs don’t phase you, perhaps Leonard Nimoy contributing the forward to a Y2K Survival Guide will sway you that this is some serious stuff!

(Even better, there is a one-hour VIDEO on YouTube of this survival guide!)

So, you had everything warning you, preparing you, telling you this is it, kiss your ass goodbye, kiss your technology goodbye, we’re all done for! It was terrifying, dogs and cats were living together, and we were so worried that this simple little computer programming mistake was going to be our societal undoing.

Well, Nothing.  Nothing Happened.

Nothing actually happened.  At midnight on January 1, 2000, nothing happened.

But to avoid the potential craziness, and the fact that we were all a little on edge and not willing to be in a public place on New Year’s Eve, let alone this apparent world-ending New Year’s Eve, we stayed home.  We had company, a nice dinner, wore “2000” paper glasses, and waited out the fateful moment together.

My television stayed on, my lights didn’t turn off, my electronics didn’t break, or worse, come off their shelves and try to fight me.  My computer turned on after midnight (I should note that I already had it off because we were hosting a New Year’s get together at our house, so I wasn’t on the computer that evening, but I did check it and everything was fine).  My VCR knew it was the year 2000 the next time I set a program timer.  Nothing happened, everything worked, and well, the wild dog packs didn’t come for me or anyone I know and love.

I’m not saying that it was not completely without problems (some technology defaulted back to 1900, but not mine), but things were ok.  Life went on as usual, we survived 2000, and had something to laugh at at the stroke of midnight on January 1, 2001.