…and also on Laserdiscs, videocassette, and Beta.

I still love them today.  Because I’m weird.

As you probably remember from hours of children’s programming, there was always a commercial thrown in for compilation albums geared at the kiddies.  Even Disney got in on the music compilation bandwagon, releasing three albums of Children’s Favorites (the first two in 1979, the the third in 1986).

I found today’s commercial among my 1987 collection (thanks to my fiancee), which was obviously to promote the fact that Disney had released a third album of children’s favorites.  Frozen wasn’t even remotely on the horizon, because you know “Let It Go” and “Do You Wanna Build A Snowman” would be all the tracks on all the albums.

The album boasts quite a collection…

Over 80 songs!  EIGHTY PLUS!  There really was children’s music before Frozen!

And the commercial not only promises over 80 favorite songs, but also…

A SPECIAL BONUS!  This songbook with animation and the lyrics for all the songs.

And that’s not all…

And I thought the stickers that accompanied my VHS copy of The Wild Puffalumps in the Isle of Wild back in 1987 were the stuff dreams were made of!

No lie, I had that rare video AND these stickers!

But, back to Disney…

Why don’t you click play and see what songs were on these albums?

Disney’s Children’s Favorites were released in three volumes – the first two in 1979, the third in 1986.  All the songs were performed by singer Larry Groce (accompanied by The Disneyland Children’s Sing-Along Chorus).  Groce recorded nine albums for Disney between 1979 and 1990.  Believe it or not, there were four of these albums, and they continue to sell to this day!

So yeah, there really are over 80 songs!

But of course, you need to do something important if you want these albums!

We didn’t have websites or the internet in 1987, so we relied on this blue screen…

The 80s.  A time when anyone not living in the 80s believed life was difficult.  Because for millennials, it is the Dark Ages.

Silly kids.  What do they know?  We had to send our money to an address if we wanted something!

And, before the rantings of being ancient get out of hand, I’m going to end it here.  But do come back tomorrow, as we continue our Battle of the Kids’ Music Compilation Albums with another compilation advertised on children’s television.

But, does it come with stickers? 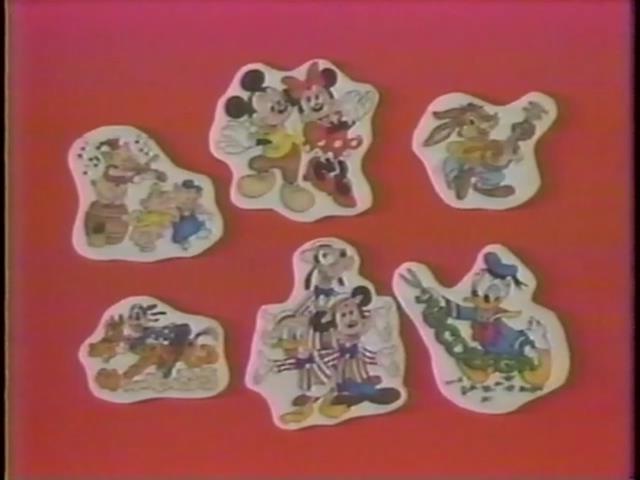 *Sigh* Not everything comes with stickers.

Until tomorrow, have a great Throwback Thursday!