I also betcha won’t believe what sacrificing the fat for that taste will do to you!

Today, we get shoved forward twelve years into chips people loved…until it made them sick.

In 1998, Lay’s marketed several varieties of their chips (Lay’s, Ruffles, Doritos, and Tostitos) in fat-free equivalents.  There was no sacrifice in taste, just the fat was cut out.  These chips were manufactured with an ingredient called Olestra, and while the taste was on par with the full fat versions, Olestra had an unpleasant side effect that became known by 2000.

But let’s focus on the introduction of the product and its apparent positives first, shall we?

Click play to see Cheri Oteri convince people these chips are just like the ones you normally buy! 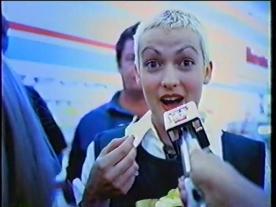 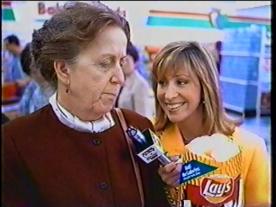 She has this “Who the hell is this crazy chick, but I like her chips” expression.

As I said, Wow chips were manufactured with the ingredient Olestra.  By 2000, the effects of Olestra (or its brand name, Olean) were becoming more well known, with reports of abdominal cramping, diarrhea, incontinence (there was a much more fun term back in the day for this in regard to the chips, but I’ll keep it out of here), and other gastrointestinal symptoms.  This didn’t happen to everyone, but it did happen to some.  Due to this, sales dropped significantly after 1998, and by 2000, were half of what they were in 1998.

Folks, when your foodstuff requires a warning label that explicitly says “loose stools” and needs to have vitamins added due to their additive inhibiting the absorption of said vitamins and nutrients, then, well…yeah.  The product probably isn’t fit for human consumption.

The bag says it all, this took a dark turn!

And so does this…

A lighter version of these chips are still manufactured today, but the warning was dropped in 2003.

So yeah, eat at your own risk.

So while the concept is still in existence, the actual “Wow” brand no longer exists, making this a sort of defunct product.  I tried Wow once in the late 90s (I think 1999), in a very small amount, while conducting a chip taste test for a school project.  I don’t remember the taste being different, and no, nothing happened to me.

That does it for this week’s jump back into the archives, when a certain comedienne endorsed a certain brand of potato chips that caused a certain type of issue.

Next week, no more talk of Olestra or Olean.  I promise!

Have a great weekend, and a fantastic Flashback Friday!