Related (Because You LOVE The Baby-Sitters Club as much as I do!)

The Great Idea: 30 Years and Counting!

The Baby-Sitters Club: “Claudia and the Mystery of the Secret Passage”

It started as a trending topic on August 1, 2016.  I saw “The Baby-Sitters Club” listed on my Facebook sidebar, and it sparked my curiosity.  Finding out that one of my favorite childhood book series (a series that was written entirely during my childhood) turned 30 years old was cause for me to celebrate it in a big way…by writing my milestone 500th post in honor of the series’ 30th birthday.  I had remembered there was a television series based on the books – 12 original stories, with one episode that was based directly on one of the books.  I’m not crazy about alot of the stuff I loved as a kid (some of the cartoons I’ve seen are, in hindsight, a tad embarrassing now), but the few episodes of The Baby-Sitters Club that I watched as a kid were actually quite good.  Granted, they are a little cheesy (especially the acting), but they aren’t unwatchable by any stretch.  I even had “Claudia and the Mystery of the Secret Passage” in my recorded tape collection, but it made me want to see the rest of the series.  So I bought it.  It turns out my memories of the show (what I had seen of it before the age of thirteen) were actually quite good.

One episode I didn’t know existed until I bought the rest of the series on Amazon Instant Video was the Christmas episode, and considering that the show originally aired from January – March 1990 (this episode aired on January 29, 1990, and I doubt it was filmed during the holiday season), it was obviously out of place, but it holds to my theory that every show has to have a Christmas episode.

And, in honor of the holiday, I have to write about it.

For your Christmas childhood holiday geeking out, I proudly present “The Baby-Sitter’s Special Christmas”! It’s Christmas time in Stoneybrook, and the BSC is getting into the festive swing of things by window shopping and deciding on gifts.

While browsing a store, Kristy comes upon an amazing (albeit expensive) baseball glove, but she is able to turn the charm on, and a sales clerk puts it aside for her. I love the look on his face in this screenshot.

Meanwhile, at the next BSC meeting… The girls are discussing their plans for the Christmas party at the hospital for the child patients, and plan their own special Christmas celebration, which will involve a Secret Santa to save on the cost of buying gifts for everyone.  In the process of actually having the meeting, Kristy books a two-sitter job for the Rodowsky family – one to sit with Shea (the oldest) while he practices piano, and the other to watch Jackie (“The Walking Disaster”) and Archie (the youngest).  Dawn and Stacey claim the job, and Dawn will make cookies with the younger boys while Stacey sits with Shea.

Oh, and they draw names for Secret Santa, there’s the first Obligatory Screaming scene of the episode (it seems like most of the episodes has at least  one of these moments, for some strange reason), and then we’re off to Kristy’s home.

And due to what I’m assuming is budgetary reasons, we only see Kristy and her mom in this episode.  We’ve seen the other family members in other episodes, but in this episode, we don’t.  Kristy tells her mom about what she wants most for Christmas.  Her mom will consider getting the glove if Kristy can work for half of the cost.  Kristy is fine with this agreement. Meanwhile, at the Rodowsky house… 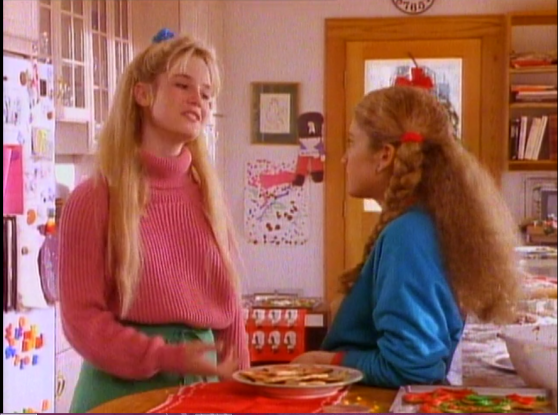 And cookie making (and eating!).  And Stacey decides to sample a cookie (which is against her diabetic diet). Dawn notices this, and questions Stacey about it (but only out of concern, despite how Stacey feels about it).  Stacey tells her that she’s fine, but I agree with Dawn – she has a reason to be concerned.

That concern continues when the group is decorating for the Christmas party, and Stacey seems a little off.  She has a disagreement with Dawn, who then expresses her concern to the other girls. 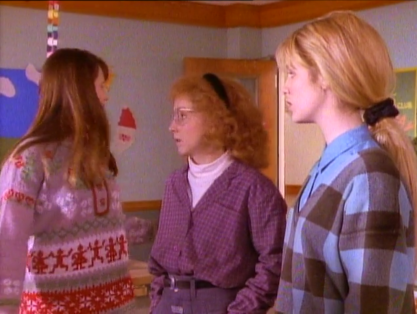 Kristy meets Ned, a young patient who broke his leg badly while playing Iceball.  He doesn’t like Christmas, and it turns out that his parents work alot but don’t have a car or alot of money, and Ned is by himself at the hospital.

Kristy seems upset by this, and the wheels seem to be turning in her head.  She obviously now realizes that not everyone is as lucky as she is. She is working for part of the cost of the baseball glove, but she’ll be lucky enough to probably get it.  Ned, on the other hand, may not be so lucky.

And she carries on with her chores, with her eyes on the prize. 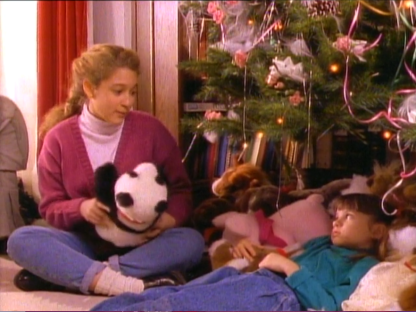 Stacey seems to be off, but doesn’t let the smart and sweet Charlotte know this.  They read “Rudolph the Red-Nosed Reindeer” together, after Charlotte puts her stuffed animals under the tree so they can look up into the tree. 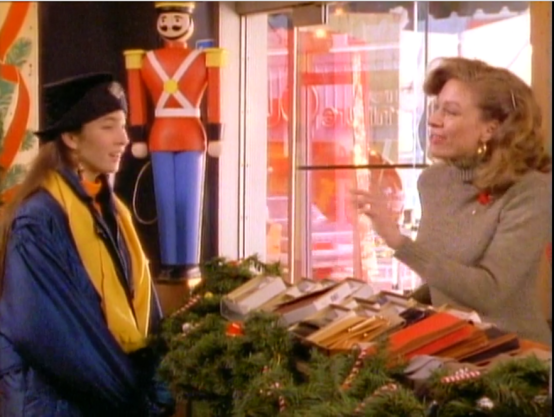 Claudia, Mary Anne, Jessi, and Dawn each show up in the same place (how convenient!) to buy their Secret Santa gifts, which leads to alot of awkward trying to conceal gifts…

…and Obligatory Screaming Scene #2 when they all manage to run into each other.  Can you imagine if they all had what they were getting each other in their hands?  This could have been more awkward than it already feels!

Because, well, it already felt awkward.

The Secret Santa gifts are a hit at the girls’ celebration on Christmas Eve, but it is Stacey’s guzzling of water and sampling of dessert the girls order that really make them notice how problematic her actions are.  Stacey says she is ok, and expresses that she just wants to be “normal” during the holidays.  It’s totally normal to drink tons of water, right Stacey?  I remember reading one of the books when I was a kid (Stacey’s Emergency), and she was exhibiting similar behavior due to the stress of her parents.  Aside from this obvious issue, the girls are excited about the holiday.

Later that night, as Jessi reads ‘Twas The Night Before Christmas to her sister Becca (or, as I’ll refer to her, “Becca #1” – there were two different Becca Ramseys during the series), we see various clips of the girls each preparing for the holiday in their own special way. 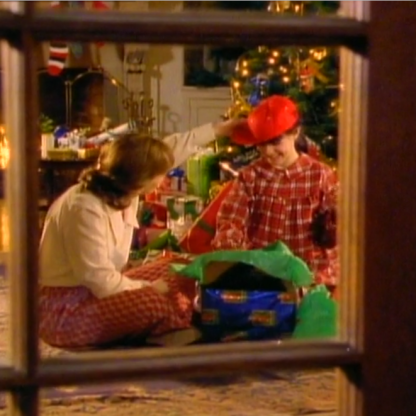 But for Stacey, things are not ok, and she finally admits to it, when she tells her mom (who we don’t see) “I don’t feel good.” 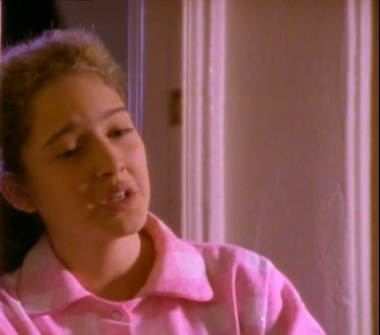 It’s now Christmas Day for the Baby-Sitters Club, and they’re at the hospital, waiting for everyone to arrive so they can finish getting ready for the party.  But Stacey is noticeably absent.  The girls see Dr. Johannsen (Charlotte’s mom), who informs them that Stacey is already here…as a patient.  Her blood sugar was high, and she was extremely dehydrated, but she was being taken care of. 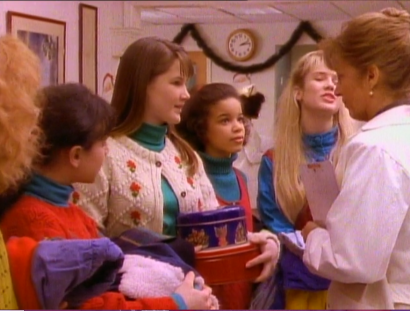 The girls go up to visit with her, and Stacey confesses to them that she just wants to be normal like everyone else during the holidays.  They ask her if she will be at the party, and Stacey says she will come later, but not before telling the girls that seeing them makes her feel better. 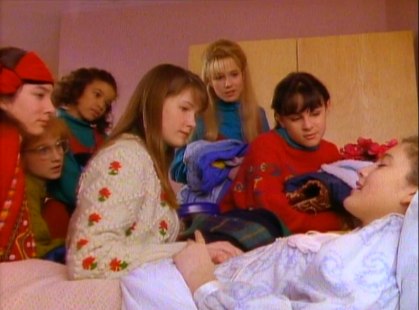 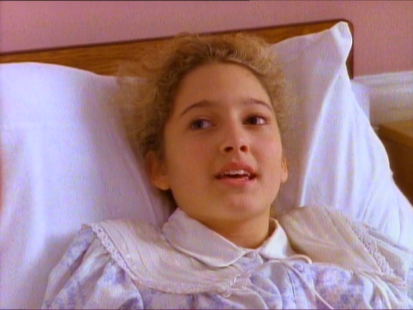 And of course, she feels bad that she was so short with Dawn.  I’m convinced that anyone who has a friend like Dawn is lucky – having someone who checks on your well-being because they care is a good friend to have.

But it’s time for the Christmas party! 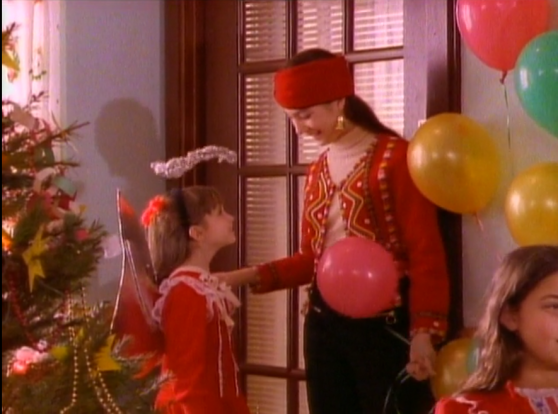 Charlotte is described as a “Candy Apple With Wings” by Claudia, and kisses Jackie under the mistletoe.  It’s all wonderful, except Ned arrives, and he seems sad.  So Kristy does something so big-hearted, she makes the reformed Grinch look bad.

She gives up her prized baseball glove to Ned.  And while he worries about accepting it, Kristy changes his mind.  His confidence in Christmas is renewed, although…his parents never do come.  We never see him again, but still, it is easy to feel bad for him.

And of course, Stacey joins the party, which is cause for celebration, as everyone sings “We Wish You A Merry Christmas” (with Shea Rodowsky playing piano).

And as everyone smiles and laughs, and we go into a freezeframe (in order for the theme music to reprise), such ends another chapter in the lives of The Baby-Sitters Club.

As the girls walk off into the wilds of Stoneybrook (is that really a thing?) and we say good-bye to our friends, I’d like to wish all of my readers, followers, family, and friends a very Merry Christmas.

Tomorrow, as you’re surrounded by those you love and value in life, remember that not everyone is as fortunate to have loving families, and friends you can count on.  Not everyone can afford that expensive baseball glove, but the meaningful people we surround ourselves with are priceless.

I do have the episodes in my collection, but I don’t have this one uploaded to You Tube. Thankfully, You Tube user JulieChrista Gaffney does!

From this one-woman team at Allison’s Written Words, have a very Merry Christmas!