Welcome to your favorite part of easing into the almost-weekend, or “Friday Eve,” but more commonly known as just…Thursday.  Continuing on with the tradition of each Throwback Thursday, this edition highlights advertising’s wonderful past.  But at Allison’s Written Words, we love to up the ante…so we’re going to look at THREE commercials!

This week’s contribution to Throwback Thursday caters to the trend of Wine Coolers, a short-lived Big Deal that was basically a done deal by the late 1980s. This triple threat of tasty imbibing delight all aired in 1986 and 1987. 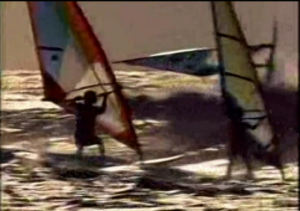 Happy people take to the water for a day of windsurfing and consuming White Mountain Coolers in this 1986 advertisement, which combines the fun of water sports and summer with the enjoyment of wine coolers…and then getting back out there and surfing again! Why not? 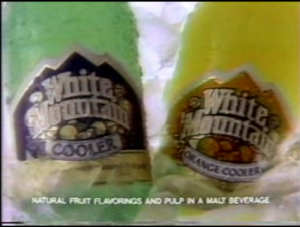 This is the famous Bruce Willis “sings for his alcohol” advertisement, which aired in 1986, during his time with the Blue Moon Detective Agency. It’s wet, it’s dry, and Bruce and his posse want you to try it too.

Moonlighting outlived the trend of Seagrams Wine Coolers. Can you figure out why? 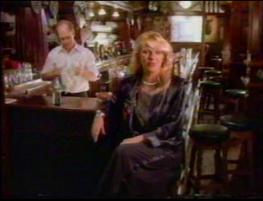 In this 1987 advertisement, Blonde Chick in the Bar tells the story of how Dewey Stevens saved her after she was abducted by aliens, and launches into a fantastical tale of her experience, which progressively grows into a Weekly World News front page story, complete with other bar patrons backing away quickly. The story ends with what might be a normal statement about how her whole family loves Dewey Stevens…except for the fact that she has 39 sisters. I’m as shocked as the bartender.

So, in response to the tease of a title, who is Dewey Stevens, and why does he have a light wine cooler named after him? 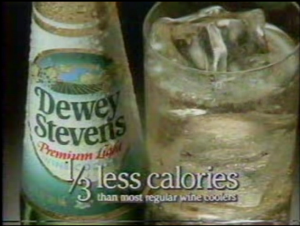 Dewey Stevens isn’t an actual person (at least, I can’t confirm that someone named Dewey Stevens exists AND has something to do with wine coolers)…just a wine cooler.  The wine cooler was packaged in 12 ounce green bottles, with 135 calories per bottle (as opposed to those other wine coolers that had 200-270 calories).  This wine cooler’s creation was announced by Anheuser-Busch in the spring of 1986, and became a thing that summer.  It was one of the many wine coolers in the “Great Wine Cooler Trend” of the mid-1980s (think Seagrams, Bartles and Jaymes, Sun Country, and California Cooler), and by 1988, the trend was old hat.  Poor old Dewey Stevens didn’t have much of a chance, but for two years, he was someone, even if he arrived late to the party.

The late 1980s effectively ended the reign of wine coolers as drink trendiness, but for a brief time, it was cool to drink wine coolers. Fruity goodness still exists in alcoholic form today, but from an advertising standpoint, it’s just not the same.

For one thing, I haven’t seen a commercial featuring Bruce Willis crooning in over twenty-five years.

And there you have it, your retro fix for the almost-end of the week…until tomorrow!

Take us out of here, Bruce Willis!