Note: This post is inspired by a conversation my friends and I had the other night.  Apparently, we all had the same collective “moment” of excitement over this, so therefore, this is dedicated to you guys.  You were there to discuss it, so you know who you are.  And thanks for letting me know that I wasn’t the only one who got excited about this!

It’s amazing what makes geeks so excited, and well, proud to be geeks.

Chances are, if you grew up in the 1980s and 1990s, were self-aware, aware of the world, and had an HBO subscription (or knew someone who did), you remember this:

And it was epic.

It grabbed your attention every time you saw it, the music made you take notice, and it didn’t matter what movie came after it, you just wanted to see this happen.

I rarely have moments where I am compelled to jump off my butt, cheer, and scream out, but when I do…yeah, it’s pretty loud.  And the moment has gotta be big.  As a geek, these moments have to be worth that energy.

This introduction is one of those moments.  I loved it as a kid, but as an adult, it gives me goosebumps.

Seriously, I was taking screenshots, and it just did.  Wow.

The idea to write this article came as the result of conversation I had with my friends last Friday night.  In the weeks since the Stargate Convention ended, we’ve been filling the void in post-Con life by chatting on webcams for extended amounts of time once a week.  We miss each other, so you do what you must to see each other…you talk face-to-face, even if face-to-face is hundreds (if not thousands) of miles apart.  Webcams and computers make that divide much easier.

When we were discussing this (and I can’t even remember how it came up, just that it did), we talked about how big the logo was, just the idea that something was coming, and that music (sweet lord, that music!) made it feel HUGE!  I just couldn’t believe that my friends knew this the way I did.  And I still love that my friend Melanie re-enacted it on her webcam.

So after we had our collective geek-out moment, I told my group about the logo being so epic, it even had a behind-the-scenes documentary all about it in 1982. It documents the creation of one of the most well-known and celebrated existences of the early years of HBO, from concept to building the model (oh yes, there was a time when this type of excitement didn’t need fancy special effects and CGI to make the magic happen) to it actually happening.  And what resulted was magic.

The sequence was produced by New York production firm Liberty Studios, who spent three months building the models of the buildings, meticulously crafting HBO’s city right down to the weather-beaten buildings.  In the original sequence, a family (or alternately, a married couple) sits down in an apartment to watch HBO, as the camera pans away from them and begins to pan over a city, as the music builds up, rushing over the city, into the country, and onward to the sky, as a burst of light brings forth the giant HBO logo (often referred to as “HBO in Space”), as it flies toward viewers, with a fanfare that makes us stand up and take notice.  As I said, it didn’t matter what movie was on, but when it happened, we watched.  And we were excited. 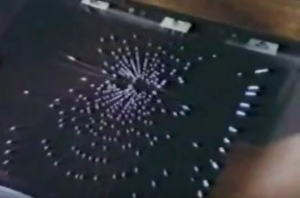 The fanfare of epicness was composed by Ferdinand Jay Smith III of Jay Advertising, and the music (through various arrangements over the years) has become the musical signature of HBO.  It premiered on September 20, 1982 (one month before I was born), and was officially retired on September 30, 1997 (a few weeks before my fifteenth birthday).  As a nearly life-long subscriber to HBO (I cancelled my service in 2010), this was always one of those things I associated with the glory years of having the channel on my dial.  It was on recorded videos my parents made (and even on one of my own from 1997…which I stupidly threw out – who knew this was going to become a relic of excitement?!), it was magical, it required no special effects to make it beautiful and perfect, and it was something all 1980s babies knew and loved.

The introduction was associated with Saturday Night premieres, but also was featured before Sunday Night features and specials.  While all of the variants were discontinued by 1986, the Saturday Night and Sunday Night features were kept on until 1993.  The “Feature Presentation” version was used until the ident was officially retired in 1997.  It felt like the end of an era for me, with the final nail in the coffin happening in the early 2000s, when Dennis Miller Live ended its run.  HBO lost all its luster for me at that point.  Cancelling it some years later wasn’t much of an effort for me, as it was not the network I always loved.  All good things me to an end, only to be relived for their wonder and value.

And because the concept of this introduction was so amazing, HBO even made a ten-minute documentary to tell you all about how they created their city.  It’s fun to watch, considering the advancements made over the years.  But 33 years ago, this was how it was done.

And one more time, for the sake of having the best closing to a blog article EVER*.

Consider your mind blown.  This will be the most epic thing you see all day.**

*Until the next best closing I could come up with.

**Until the next most epic thing you see.  Which may not happen today, but it will happen.

God freakin’ bless you, HBO.  I salute you.

One thought on “The City That Wasn’t Built In One Day: The Epic Amazingness of the HBO City Ident”